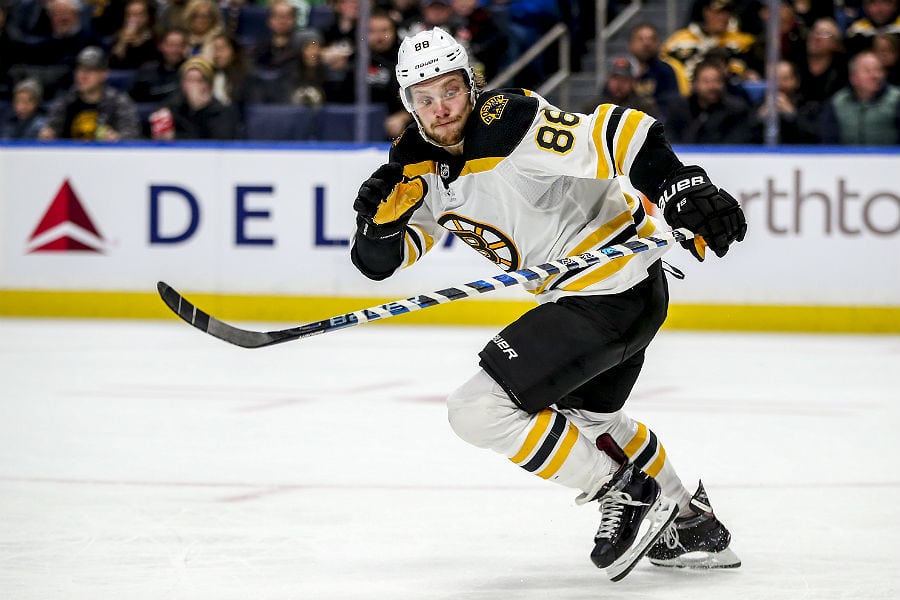 David Pastrnak burst out of the gate to begin the season for the Boston Bruins, and he immediately looked like a contender for the Rocket Richard Trophy. Given that Pastrnak was coming off consecutive 30-goal seasons, he looked like a prime candidate to top that leaderboard. In his 12 games in October, Pastrnak scored an incredible 11 goals. It was always extremely unlikely that Pastrnak was going to continue at a rate in which he would have eclipsed 70 goals by the time the season ended. Understandably, he has slowed off that pace a bit since then. In his 13 games in November, Pastrnak was still fantastic, but expectedly eased it back and scored a more realistic eight goals. In 14 December games, Pastrnak has four goals and 15 assists for 19 points. He had 10 assists combined for all of October and November.

Pastrnak is still generating scoring chances for his teammates, but he hasn’t personally been lighting the lamp with the same type of proficiency he showed earlier in the year. In his 25 games in October and November, Pastrnak had 19 goals on 101 shots on goal, registering an 18.8% shooting percentage. Pastrnak was averaging about 4.04 shots on goal per game in those first two months, and converting those shots on net into goals at a rate that was higher than his 13.3% career shooting percentage heading into this season. Pastrnak was also getting more pucks on goal than ever before, as he had averaged about 2.79 shots on goal throughout his career. His season-high in that category was 3.49 shots on goal per game in 2016-17, so his October and November total this season really represented a leap for him.

"$75? You can't say no…it's a steal. Literally a first-round pick."@pastrnak96 is all of us while Christmas shopping…🎅 🎁 🎄 pic.twitter.com/tiSuSiUnKS

In the 14 games then, though, the stats have begun to come back down towards what his career totals had been before this season. He has 50 shots on goal in those 14 games, averaging 3.57 shots on goal per game. That is very close to his rate for the 2016-17 season. His December shooting percentage is what has caused the low output. Pastrnak is shooting just 8% in those 14 December games.

That December stretch has made Pastrnak fall behind in the chase for that Rocket Richard Trophy, as he is now tied for sixth in the league in goals. Alex Ovechkin is currently the league leader in with 29 goals in 37 games, and he is up by three over Jeff Skinner and John Tavares. Ovechkin has previously won the Rocket Richard Trophy seven times in his career, including five times in the last six seasons. The award has basically become his to lose any season in which he doesn’t miss significant time due to injury, and he deserves to be the favorite as things look right now.

David Pastrnak with a knucklepuck through Rinne and the Bruins have a 2-goal lead!

With how things are shaping up, the winner of the award this season is going to at least have 50 goals, so that’s where Pastrnak needs to get to have any type of realistic chance. That doesn’t look as safe of a bet anymore after these last 14 games, although it’s not out of the question that he can still get there. If Pastrnak plays in 79 games this season, he has 40 more games to score 27 goals. It’ll be hard, but he’s capable of that type of production. An extremely conservative estimate would have Pastrnak averaging 2.75 on goal in those remaining games and shooting 12%. Those totals are both lower than his career totals and represent a scenario in which Pastrnak underperforms from here on out relative to what he can do. In that hypothetical, the Czech native would still finish this season with 40 goals. That would be more goals than he has ever scored in a season.

The odds of Pastrnak winning the Rocket Richard Trophy have certainly decreased, but he is still very much poised to have the best season of his career. He looks like he’s in the midst of his most impressive season, which is really saying something given how he has asserted himself these past couple years as one of the premier scorers in the league. Even if the Rockey Richard Trophy appears less likely after four goals in those 14 December games, he is going to be among the lead leaders in that category this second half of the season if he’s able to stay healthy.

Check out the available tickets from our advertising partner SeatGaint for your next Boston Bruins game. Click the link below, and when purchasing any event ticket, from the NHL, NBA, MLB, NFL to concerts and shows, please use discount code BNGP to save a little money. Thank You and have a Happy New Year!