Timing May Be Right For Bruins

They say timing is everything.

In life, most definitely and in sports, most assuredly. This holiday season, the gift of timing may be ticking in the Bruins favor for a change, as the team’s most recent spirited play against the “keystone cop Canadiens” and the celebrated return of co-captain Patrice Bergeron are coinciding at, figuratively and literally, just the right time!

First, you have the above highlights which for all intents & purposes entertainingly highlight just how solid of a road game the B’s played at the Bell Centre in Montreal. Especially coming off consecutive losses to Buffalo & Pittsburgh that were not only winnable well into each 3rd period for Boston, but also filled to the brim (like a Christmas Eve stocking) with scoring chances. Second, and perhaps most important, you have the tweet below which reads as gloriously and miraculously as a “Night Before Christmas” storytime yarn beside the fireplace:

PATRICE BERGERON IS MAKING HIS RETURN LADIES AND GENTLEMAN HOLD ONTO YOUR HATS https://t.co/TlkFCnEuIe

Hold onto your Santa hats, indeed! Because with the Ducks, Preds & Whalers (yes, I’m refusing to call that team by that other name since players will be sporting my favorite non-B’s jersey ever for the captivating contest in Carolina) all set to skate against the Bruins leading up the 25th of December, NOW is exactly “the time” for the team to be playing successful hockey with a passion & purpose. Personally, there’s no one better to help that trend continue than the perennially point prolific Patrice B. Sure, Boston bench boss Bruce Cassidy will have some important, and dare I say timely, decisions to make when it comes to the roster…

Patrice Bergeron’s impending return is obviously welcomed, but what will the #NHLBruins lineup look like? Do you put PB37 back with Marchand and Pastrnak? Or keep Krejci on the top line?@_TimRosenthal has an interesting theory on the trickle down effect. https://t.co/bFDZJhN7hh pic.twitter.com/KRJVBibYxe

…But I’m confident players, fans, media, bloggers and everyone else will be a-ok with the updated look if the B’s keep up the good timing and rekindle some chemistry on more than just the top line or two. Anyone who thinks the return of No. 37 will hinder that instead of help it along is in need of a good help-ing of holiday coal. The rest of us cheerful chirpers will gladly enjoy the “through the glass” view of healthier Bruins hockey as if we were frozen in time in a Norman Rockwell painting.

I envision #NHLBruins fans looking like @NRockwellMuseum’s holiday collection once they see Bergy is back on the ice… and just in time for Xmas!🎄🎁🥅🏒🤞🏻💯 #throughtheglass
More in my @BlackNGoldPod Blog ahead! pic.twitter.com/rOZwDvbogm

Speaking of, let me paint you a picture of what the “Bergy’s back” Bruins could look like, if you have the time (and factor in the young Mr. DeBrusk is still recovering and that the coaches don’t want to break up the current 1st line):

Of course, there are a multitude of other line combos that can be arranged, and rearranged, between lines 2-4. But I’m most intrigued by the blending of youth, skill, veteran savvy and toughness from the above — at least for now when using my projected imagination. While on that topic, imagine Bergy getting the best out of both Donato & Heinen: two legitimate scoring threats who were starting to show their skill consistently when aligned as a line with Jakob Forsbacka Karlsson aka JFK, but who now have the smartest player in modern-day hockey centering their abilities with his own uncanny ability & talent. Oh, the possibilities!

I also think it’s promisingly possible for JFK to center the likes of Joakim Nordstrom and David Backes. You’d have a younger, confident playmaker providing opportunities for a now confident-as-can-be Backes who is playing his best hockey of the season. Add in the fact that the skillful Nordstrom just got off the scoring schneid (shnide?) and onto the score sheet versus the hated Habs and you have a spoked-B bunch on the 3rd line who are all eager to keep the momentum going time after time, as Cyndi Lauper once sang.

And who wouldn’t sing the praises of a 4th line featuring a hungry-for-more-goals Colby Cave in-between an energetic Sean Kuraly and tough as nails Chris Wagner (sorry Noel Acciari for the untimely scratch at the moment)? For what it’s worth, this is a creative combo that could be filled with more holiday “hits” than a Bing Crosby collection! 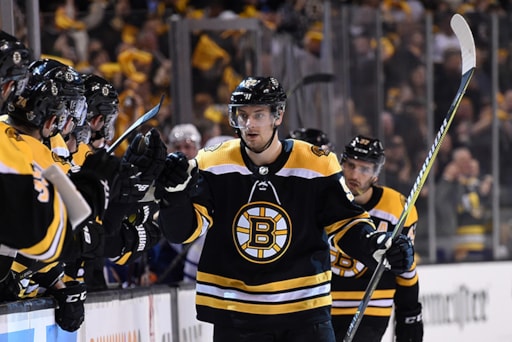 But this is all speculation, with a side of curiosity and wishful thinking. It’s a fun game to play at the moment because the B’s, for the time being, are finally having some fun playing THEIR game. At least it feels that way in the wake of a big bounce back performance for the Black N’ Gold against the Bleu, Blanc et Rouge. Will it continue, and what will it look like with Bergy coming back? Well, those are the big, bold questions all wearing a spoked-B right now.

Follow along as @47 traces the evolution of our iconic #NHLBruins logo, starting with the original. pic.twitter.com/cPjmZTWlAx

If any of it can turn out to be as timeless as the B’s logo from the video above, then I think all of Bruins Nation will be grateful this holiday season.

Then again, timing is everything.