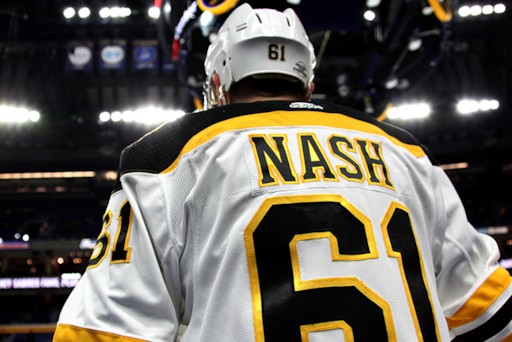 Photo Courtesy Of 98.5 The Sports Hub

Rick Nash announced his retirement from the NHL this morning at the age of 34 after 15 seasons in the league. Nash was traded to the Bruins last February in exchange for Ryan Spooner, Matt Beleskey, prospect Ryan Lindgren and two draft picks including the B’s first round selection in last year’s draft. Nash skated in 11 regular season games, totaling three goals and three assists. He also appeared in 12 playoff games, posting three goals and two assists.

Nash appeared in 1,060 career regular season games, posting 437 goals and 368 assists for 805 points. Appearing in 89 playoff games, Nash posted career numbers of 18 goals and 28 assists. Spending the majority of his career in Columbus, Nash is the Blue Jackets career leader in goals, assists, and points.

The Brampton, Ontario native was named to the NHL All-Star team six times and was a member of the All-Rookie team in 2003 when he posted 17 goals and 22 assists for 39 points. Nash was also a two-time goal medalist with Team Canada at the 2010 and 2014 Winter Olympics. Nash called it a career after concussion issues towards the end of his time with Bruins but he ends his career as one of the greatest forwards in the entire league over his successful career.