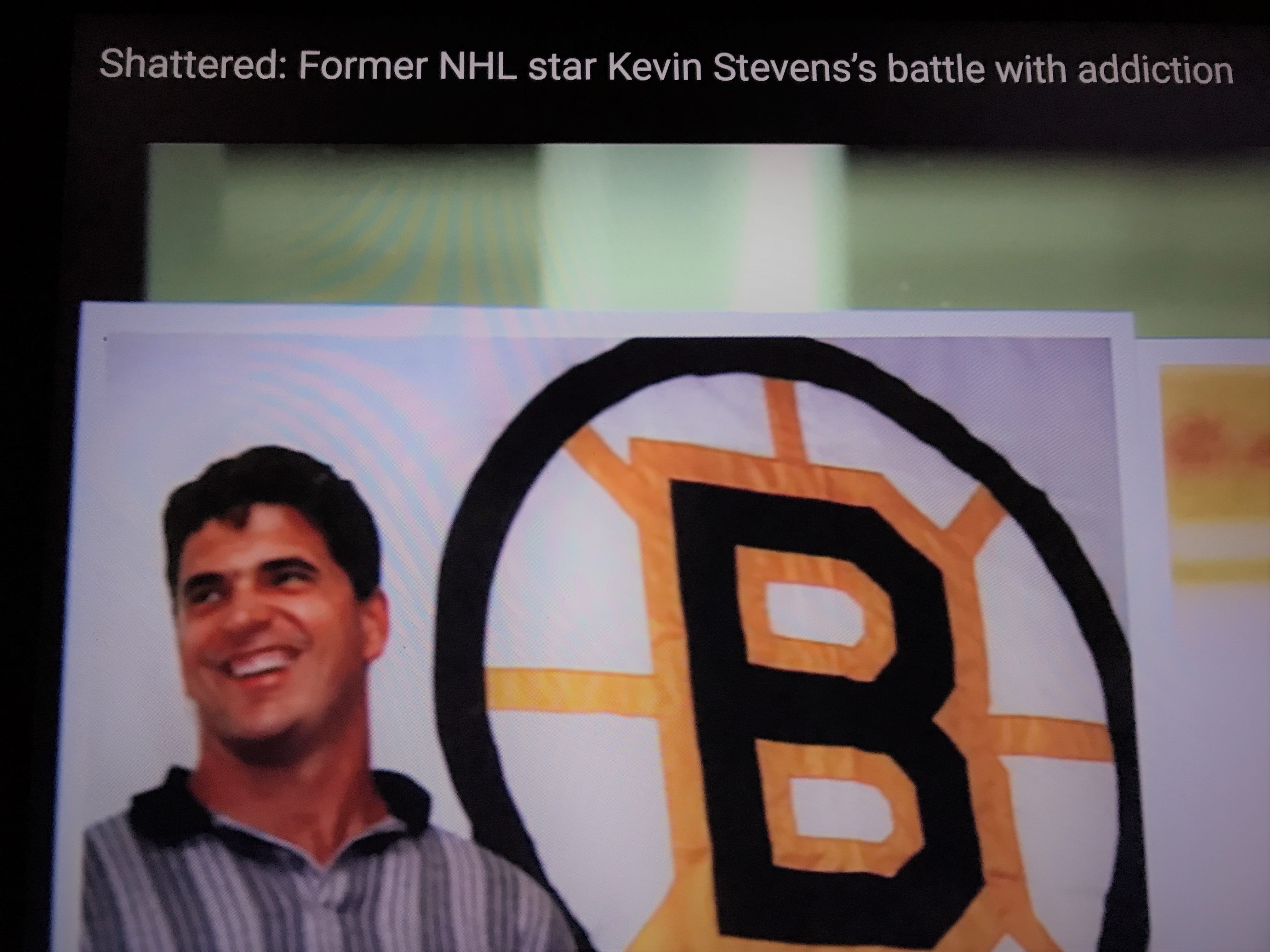 “It was almost like livin’ in a Normal Rockwell.”

That’s how Kevin Stevens and his family, poignantly and painfully profiled in a recent SportsNet documentary entitled *Shattered, described growing up in Massachusetts and loving sports, especially hockey for the hometown kid who rooted for the Bruins from his Pembroke neighborhood and later wowed on the ice playing for Boston College.

And when Stevens, then a Stanley Cup Champion Penguin, was traded from Pittsburgh to Boston in 1995 — seemingly at the top of his career — it felt like the perfect story line: local kid returns to his roots where he learned to love the game.

Unfortunately, and unbeknownst to many in his life (fellow players, coaches, friends, even his family), Stevens also had a love for something else: drugs. It was an addiction, and secret, that began even before he made it back to Boston–one that proved almost as fatal as the epic injury he sustained in the ’93 playoffs:

To quote SportsNet Writer Dan Robson, who interviewed Stevens in Boston for a tragically insightful “What It Takes” article, it was the hit from the video above that forever changed the course of Stevens’ career and life:

But all of that ended after a horrific on-ice injury in which the bones of his forehead were crushed like potato chips, causing permanent damage to the frontal lobe of his brain. He was never the same player again, and the end of his NHL career was accompanied by a descent into addiction — both to party drugs, like cocaine, and opioids. For more than two decades, Stevens lived with a disease that took everything from him.

“One-Time Bruin #KevinStevens Overcame Big Time Addiction Issues.” As the 1yr anniversary of the @Sportsnet documentary SHATTERED approaches in Feb, I’ll take a look back for @BlackNGoldPod on how Stevens’ & Boston-both the team and the city-have been intertwined through it all. pic.twitter.com/wmFZHNZ9RH

After that, Stevens (like another Bruins alumni who battled personal problems and was profiled right here on the Black N’ Gold Hockey Blog — Joe Murphy) just couldn’t find a way to help himself, let alone get help from anyone else. Although he admirably tried to make a post-injury comeback, using his excitement about playing for the Bruins as a big motivator, Stevens the player and Stevens the man were just never the same. He retired from the NHL in 2002 after unsuccessful stints with not only the Flyers & Penguins (again), but also the NHL/NHLPA’s Substance Abuse and Behavioral Health Program.

And unlike anything the aforementioned Normal Rockwell could have painted, Stevens post-hockey life was anything but picturesque. He was hired as a professional NHL scout, but instead scouted for pills & Percocet, per Robson’s remarks:

Stevens took opioids in any form he could get them. He bounced from doctor to doctor lying about injuries, trying to find one who would write him a prescription. When he did, he’d stick with that doctor until the well dried up. If he couldn’t access the pills legally, he’d resort to street dealers. Stevens says that during this period he needed about $500 worth of drugs a day just to get by. He believes he spent millions paying for his drug use. And he pawned everything of value he had, including both of his Stanley Cup rings.

On March 18, 2010, Stevens was invited to [then Pittsburgh GM Ray] Shero’s suite at Boston’s TD Garden before the Penguins took the ice against the Bruins. Stevens wasn’t sure why Shero wanted to see him, but as soon as he walked in the door, it was clear. Along with the GM were two familiar faces — Dan Cronin and Dr. Brian Shaw from the NHL and NHLPA substance abuse program.

Stevens second attempt at rehabilitation also didn’t take, nor did any of his addiction counseling. He soon found himself at the center of a federal drug case and the subject of a conspiracy and possession (with intent to distribute) charge. In May of 2017, Stevens entered the courthouse in Boston, only a short drive from where he grew up, and entered a “Guilty” plea to the charge against him. The scene at the courthouse was described in detail by Robson:

Judge O’Toole gave Stevens a $10,000 fine and three years’ probation, with the condition that he be involved in public speaking and anti-drug educational efforts. The courtroom broke out in muffled cheers. That afternoon, Stevens walked out of the courthouse a free man. If this last arrest had finally been rock bottom, he thought, he’d been given another chance to pull himself back up. This time, he wasn’t going to let it slip away.

Stevens certainly hasn’t let his release slip away–a release not just from prison, but from addiction; a release even more impressive (and important to him now) than the one he had during his 1991-92 NHL season when he outscored “The Great One” Wayne Gretzky himself!

In fact, in January of this year, Stevens continued his commitment to public speaking and speaking out on his struggles at his high school alma mater Silver Lake Regional in Kingston, Mass.

Congrats to all Silver Lake H.S. Hall of fame inductees. Especially proud and happy for fromer NHL star and SL alumnus, Kevin Stevens who leads by example on and off the ice.#oncealakeralwaysalaker pic.twitter.com/5ovnL4shbM

To quote Mr. Norman Rockwell himself: “The secret… is looking ahead to something new and exciting. The secret is not to look back.” Thankfully for Kevin Stevens, a one-time Bruin who overcame big time addictions, that’s a secret he no longer has to keep.

*(You can watch the entire Shattered documentary below and learn more about Stevens’ longtime battle with addiction by clicking on the links provided earlier in this article):