A “Nifty” Accomplishment For Bruins’ Marchand! 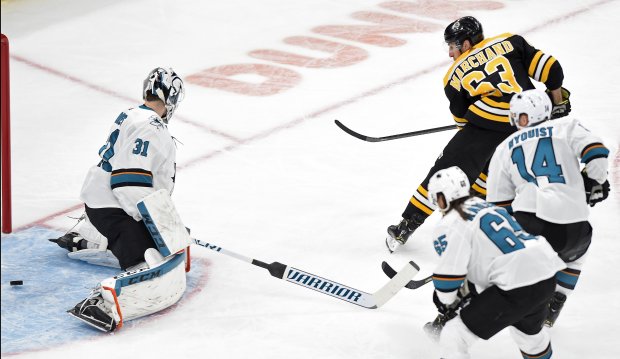 When shorthanded, one pesky player on the Boston Bruins is now as sure-handed as ever. In fact, you could say no one’s “niftier” now than Brad Marchand:

Brad Marchand ties Rick Middleton for the most career shorthanded goals on the Bruins (25) #NHLBruins pic.twitter.com/ccaCFB61Ld

“It really is hard to put into words…I honestly believe this is the biggest honor that a retired athlete can get in his career.”

🎥Bruins legend Rick Middleton discusses the honor of becoming the 11th #NHLBruins player to have their jersey number retired: pic.twitter.com/ACfuyQ5wLL

With his 25th career shorthanded goal, which came against the San Jose Sharks at TD Garden on Tuesday, February 26th, Marchand tied recently retired-number honoree & Bruins HOF’er Rick “Nifty” Middleton for the all-time team lead in goals while a man down. It’s a record you don’t always think about when it comes to “points” in the game of hockey because of just how rare, and how hard, shorthanded goals are to come by. But in era where penalty killing is a top priority, there’s none better than No. 63 in Black N’ Gold.

Brad Marchand is 1 of 12 NHL players in their first 10 years, with

There are some REALLY elite names on this list

As you can see from the tweet above, Marchand is not only in prestigious company when it comes to Bruins history, but also hockey history. His so-called “decade of dominance” (as just described) has put him among the most dangerous players on the ice no matter the time of game. But, as we’ve come to learn in Beantown, it’s especially true when the B’s are on the PK. To wit:

I remember sitting in section 303 in the top row for Game 3 of the Cup Finals back in ’11 when Marchand set the building ablaze with what could be the “niftiest” shorty in team history. Even then you knew that his ability with the puck shorthanded could put the fear in any opposing PP unit or goalie because if they weren’t careful, he was lighting the lamp at the other end of the ice for a 4-man celebratory scrum! The fact he continues to do that on a nightly basis–even if the numbers this year don’t quite match the highs of year’s previous–only proves that the pest joked about as being “a rat” may have a lot more of these highlight-reel goals in his nest.

To quote the highly-skilled and highly-respected B’s alumnus with whom he’ll soon pass for most shorthanded goals in team history, Mr. Middleton himself:

“When I got to Boston, I didn’t really understand the defensive side of the game… had to thank my coaches for that.

Really, the only way I could have put up numbers like that was by getting the ice time.” — Rick Middleton on WAAF Radio, 8/6/18

Today we spoke with the latest @NHLBruins alum to have his number retired, the one and only Rick Middleton! – https://t.co/qwibZyTjhA pic.twitter.com/lYFJKPFjY9

So, if ice-time is any indicator of where Marchand could end up when all is said and done for his Bruins playing career–literally, a top line talent who plays in ALL game situations for the B’s just like Middleton did–then eclipsing No. 16 may not be the only accolade No. 63 will be remembered for.

Here’s a @Bmarch63 #nhlbruins jersey sporting quite the “Nifty” patch on it in honor of @NHLBruinsAlumni & recent retired-number honoree Rick Middleton! In fact, the two now share a sure-handed accomplishment while shorthanded. Check out @BlackNGoldPod Blog for more! #BruinsFam pic.twitter.com/OQkJTMdpbz

For a guy his teammates call “Marchy,” that sure seems like a pretty “Nifty” accomplishment to me!