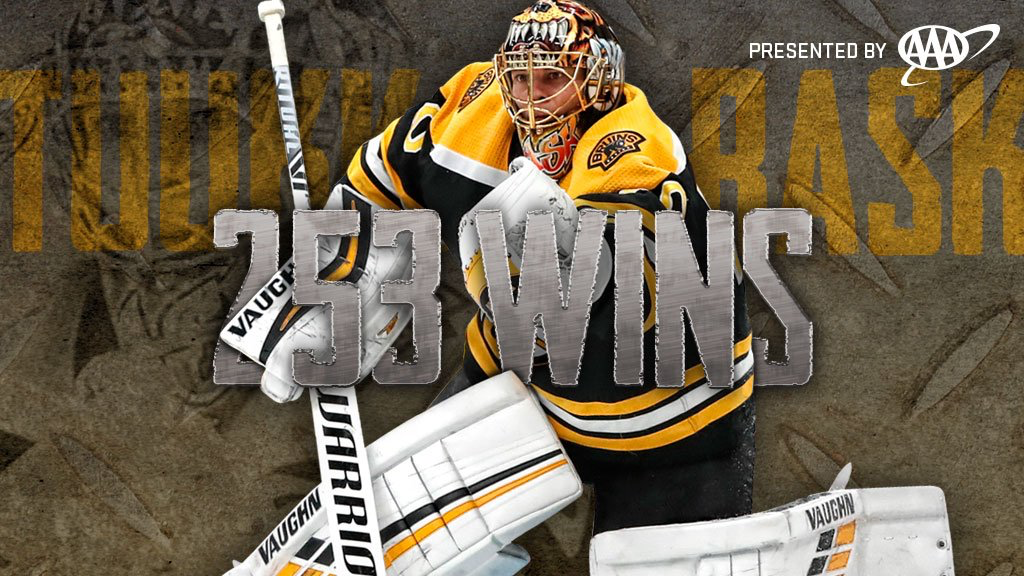 What a wonderful, wacky, wild, whimsical, & whirlwind start to 2019 for Tuukka Rask. First, the beloved/beleaguered B’s netminder surpassed team legend and HHOF’er Tiny Thompson for the “Most Games Played” for a goalie in a Bruins uniform on January 1st during the Winter Classic.

Then, he tied Thompson’s record for team wins two weeks later with a 5-2 victory over the St. Louis Blues, entering into elite Bruins crease company.

Boston Bruins goaltender Tuukka Rask has tied Tiny Thompson for the most wins in franchise history with 252. #NHLBruins

But, before he even had a chance to enjoy the accomplishment and set his mind on record-setting victory number 253, he nearly lost his mind in a concussed collision with Rangers player Filip Chyta.

The Bruins lost to the Rangers last night, but they also lost Tuukka Rask to a concussion https://t.co/jsHPdu9bIS pic.twitter.com/URUPX8Rnmk

I don’t even like watching it after the fact because it’s about as worse as it gets for a goalie (unless of course you’re Clint Malarchuk). However, with a bye-week and All-Star break fortunately scheduled for right after that painful game, Rask had time to heal from his concussion and get back into game shape — no easy feat when returning from any type of head injury/contact. And an even more challenging feat when you’ve ALREADY returned from a mental health break earlier in the season to get your head right.

Mental health break for athletes is important. Worked for Rask, team advocated for him and he is rewarding them.

Then, he literally stands on his head against the flightless Flyers to end the month of January (all but a GUARANTEED win to break the record, right?)

Wrong. Rask got absolutely no help from his D-core or any teammate not on the 1st line–especially Danton “Empty Net” Heinen–yet Tuuuuuuuk still maintained his poise, confidence & resolve after the fact, even when head coach Bruce Cassidy nearly lost it during the post-game presser.

Cassidy: “Tuukka gave us every chance to win the game.”

That’s right. The “Unforgivable Curse”. If he would’ve (Harry) Pott(er)ed that one, Bs win. Tuuk makes history. Team gets confident. This “high for Heinen” crowd should be at an all time low, just like Bs secondary scoring. You HAVE TO bury your chances in this league. https://t.co/DAYpw6ctZa

So, who better to straighten it out? The Fin with finish who’s now finished in the No. 1 position on the Mt. Rushmore of Bruins goalies. This, after literally & figuratively climbing back up a mountain to be the best goalie he can be–for his teammates, the entire B’s organization and all of Boston fandom (yes, even the crazy ones from the THC… “Tuukka Haters Club”). And there was no better way to do it than by taking down the team that’s owned him, and the entire B’s organization, for the past 5 seasons: The Washington Capitals.

Oh my! #NHLBruins Tuukka Rask with the SAVE OF THE GAME to rob #ALLCAPS! pic.twitter.com/MyeWrwTZ7R

Tuukka Rask earned the 253rd regular-season win of his NHL career (all w/ BOS) and passed Tiny Thompson (252) for the most in @NHLBruins history. #NHLStats #BOSvsWSH pic.twitter.com/9umdKPsuuz

This was no doubt an important game for Rask, and the roster, on many levels–both personally & professionally. For the forwards & D, it was their chance to respond after being called out by Cassidy for an unwillingness to “buy into the system” of Bruins hockey. And for Rask, it was his chance to not only silence any critics of his game coming off the concussion, but also to achieve a milestone moment in a B’s sweater that NO OTHER goalie in Boston history had ever accomplished (and against a team he hadn’t beaten since the Obama Administration). Needless to say, everyone stepped up, especially Mr. 253, who made history in the most memorable way possible… with a 1-0 shutout and more timely saves than he’s gloved, blockered & sticked away all season!

The moment when @tuukkarask set the record for most wins of any goalie to ever don the spoked-B. #NHLBruins pic.twitter.com/ToELPhP0Ap

“Your name is in the history books. That’s about it…hopefully I can put up a couple more.”

Moving forward for both Rask and his teammates, everyone wearing the Black N’Gold “Spoked-B” needs to build on this oh-so-important win and keep the momentum going down the stretch. The season/going-to-the-playoffs will most likely come down to a few points, with the B’s having a pretty good chance at matching-up against the Caps for either a first or second round series (if they can make it that far). With the rally monkey now literally & figuratively off their back against Washington, hopefully the B’s can use this victory as a catalyst and start a strong stretch of hockey between now and April. And if Rask can continue his impressively strong & clutch play between the pipes, also using his history-making “W” as a motivator, then come playoff time, I think we’ll all be rooting for #TuukkaTime!