And so it began… an NHL career on one hand and cell phones constantly posting to Twitter on the other — two separate and disparate occurrences coyly (and perhaps even Coyle-ly) connected thanks to the new No. 19 in Boston, Zach Senyshyn:

Let’s be real, nobody knows what to expect from Zach Senyshyn, though he’s already maligned because he was taken one pick before Barzal. So before he skates his first NHL shifts tonight, I tried to outline what folks at least should know about him.https://t.co/53B7jrFLoG

So, what SHOULD folks know about the B’s prized prospect both lauded & lamented simultaneously for what he’s never done yet and still yet to do in a Black N’ Gold sweater?

Bruce Cassidy prescribes rest for a handful of Bruins to make sure they’re as fresh as possible for next week’s playoff series v Toronto.
Jaro Halak goes in goal, #19 Zach Senyshyn makes his debut.
8pm on NESN. pic.twitter.com/b6p70IORmu

.@ZachSenyshyn is on the ice in Minnesota.

And in the hallowed hockey history of memorable Bruins’ debuts, I’d call Senyshyn’s nothing to shun. In fact, he shined in the limited but productive ice time he was given by head coach Bruce Cassidy.

#NHLBruins Cassidy on Zach Senyshyn, “I thought he played pretty well. He had a lot of chances early on. Was ready to play. Did his job. A lot of good things.”

What does “played pretty well” translate to, especially when paired with fellow newbie B’s Charlie Coyle & Marcus Johannson for most of the night? Well, outside of solid stick handling, puck possession & body positioning… how’s about scoring your first career NHL goal in game number numero uno in front of your fanning-out folks! Here’s a look from multiple angles from multiple tweets:

You down with ENG? Yeah, you know me! Or, at least him now. Him being Zach Senyshyn, all Seny-suited up following his memorable Minnesota debut, proudly profiling a picturesque puck of perfectly positioned portraiture seen below:

So, what does the future hold for a young man who now holds a more impressive one-game statistical resume than a certain other notable ’15 draftee, sarcasm set aside so we can slyly celebrate before reality sets in?

I bet we’re all hoping for something surreal… something that reminds us of other talented & promising B’s prospects who matured late and blossomed in the spoked-B despite the hate, hype & hyperbole directed their way before they even played an NHL game. I know Senyshyn’s teammates are already tickled pink for their baby-faced brother, as you can see from their smiles & sentiments on the ice & off (himself included)!

How will you describe that one in 30 years?@ZachSenyshyn: “Oh, top shelf, dangled a couple guys…” pic.twitter.com/DkloGamIBK

It’s reassuring to know he, too, is taking it all in stride, with laughter, graciousness & gratitude at the forefront of a hockey skillset and mindset just waiting for even more chances to Seny-shine in Boston. 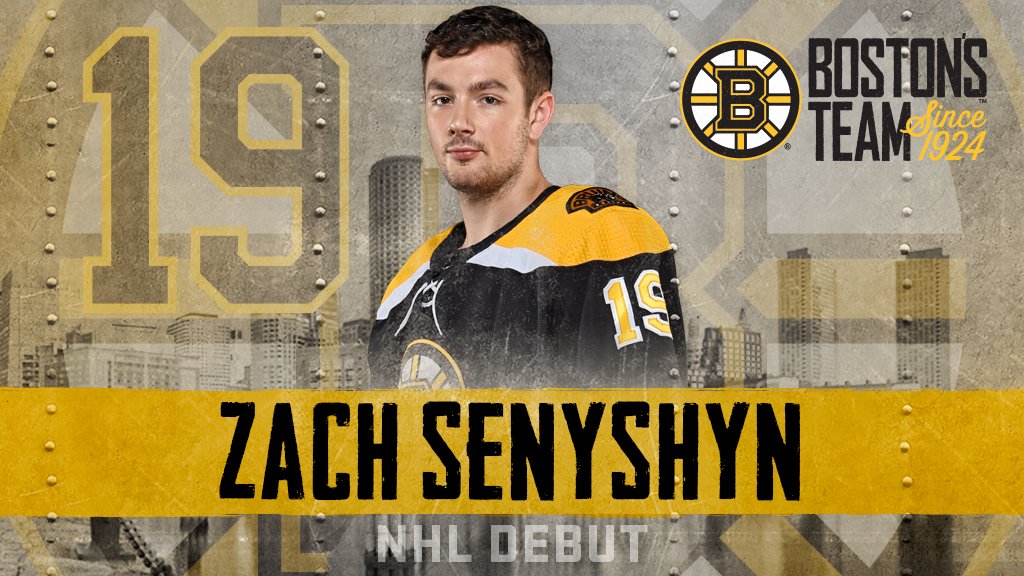