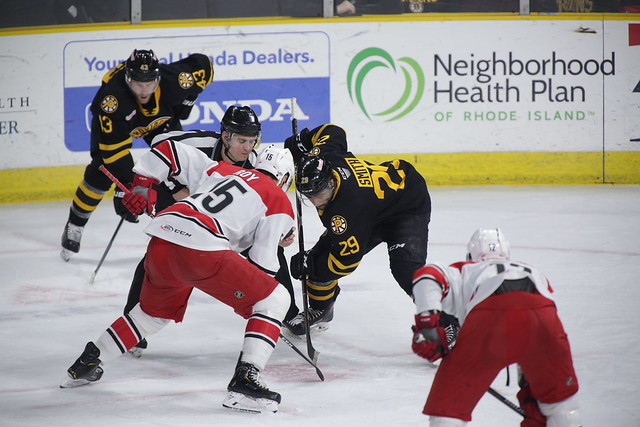 After a grueling 76-game schedule, the AHL regular season has come to an end. The Providence Bruins finished off the year 38-27-8-3 (87 points) and 5-5 in their last 10 games. This was not only good for fourth in the Atlantic Division, and seventh in the Eastern Conference but also a spot in the coveted Calder Cup Playoffs. Our baby B’s will take on the Carolina Hurricanes’ affiliate the Charlotte Checkers in the first round. The hard-hitting playoff action begins on Saturday, April 20, 2019, at the Dunkin’ Donuts Center in Providence, Rhode Island. It’s going to be an exciting series that you do not want to miss.

The Providence Bruins will be in the playoffs for the 22nd time since 1987 and the 20th time since the team moved to Providence in 1992. Their first two playoff appearances were as the Maine Mariners in 1987-88 and 1990-91. The baby B’s will look to capture their second Calder Cup with their only one coming in the 1998-99 season. Our boys in black and gold will take on the Charlotte Checkers who are the top-ranked team in the Atlantic Division as well as the Eastern Conference. The first-round schedule will be as follows:

The Charlotte Checkers finished the year 51-17-7-1 (110 points) and 8-2 in their last 10 games. During the regular season, the Providence Bruins and the Hurricanes’ affiliate played eight times with the Providence hockey club going 4-3-1. In the first installment of the season series, the Carolina Hurricanes’ affiliate beat the Baby B’s 4-3 with the Bruins getting goals from the now departed Jan Kovar, Trent Frederic, and Jordan Szwarz. Meanwhile, goalie, Dan Vladar had a rough night in net turning away 20 of the 24 shots he faced. The second meeting did not yield better results for our boys in black and gold as the Checkers won 3-2 with the Bruins getting goals from Peter Cehlarik and Ryan Fitzgerald while goalie, Zane McIntyre played valiantly stopping 17 of 20 shots in the loss.

In the sixth game of the season series, The Bruins beat the Checkers 2-1 in overtime getting goals from the now Ryan Donato, and Cameron Hughes (OT GW). Goalie Zane McIntyre was superb in net stopping 28 of the 29 shots he faced. The seventh grudge match saw the Baby B’s beat Charlotte 1-0 in overtime getting their game-winning goal from Gemel Smith. Goalie Dan Vladar was excellent in net turning away all 37 shots he faced. The final game of the season series saw Providence fall 3-2 getting goals from Paul Carey and Jakub Zboril. In net, Dan Vladar was good stopping 29 of the 32 shots that were fired his way.

Another major key to the series will be grabbing an early lead and keeping it. When leading after the first period, the Checkers are 30-5-1-1. The Providence hockey club is 17-7-3-1 when they are leading at the end of one. When ahead after the second period, the Charlotte hockey club is an astounding 38-0. The Bruins, on the other hand, are 30-4-2-2 in the same scenario. The other major key to winning is will the baby B’s get enough scoring. The boys in black and gold scored a total of 228 goals on the year which is 3.00 goals a game. This was good for 10th in the East. The Checkers only gave up 189 goals on the year which is 2.48 goals a game. Only one team was better than that in the Eastern Conference. If the Providence Bruins want to win, they are going to have to get scoring from everyone.

Who’s hot and Who’s not for the Bruins

Jordan Szwarz: Jordan Szwarz has had a great season for Providence. The Bruins’ Captain in 68 games played netted 23 goals while dishing out 23 assists for 46 points. That’s a point per game total of 0.67. That it includes netting five goals and dishing out 12 assists for 17 total points in his last 17 games. The OHL product has been essential to the success of the baby B’s and when he scored his 20th goal on the year, he became the fifth player in Providence Bruins history to score 20+ goals in three different seasons. It’s safe to say that if the gritty forward is doing well so are the Providence Bruins. If they want to take out the Eastern Conference-leading Checkers, then Szwarz is going to need a big series.

Gemel Smith: Gemel Smith has had an excellent season since coming over to Boston in a trade with Dallas back in December. After three games with the big club, the OHL product was sent to the AHL and excelled almost instantly recording points in nine of his first 12 games. Recently, he has still been great. Over his past nine games, the gritty forward has found the back of the net three times while also dishing out six assists for nine total points. The Former Stars’ draft pick is another player crucial to the success of the Providence Bruins as a whole, and they need him to come up big in the Calder Cup playoffs.

Peter Cehlarik: Peter Cehlarik has been good for the Providence Bruins as a whole this season, and his play recently shows that he might be turning the corner on the mini-slump that he was in, but I am not willing to say he’s out of the not category just yet. In 53 games with the Providence Bruins, he netted 12 goals and dished out 26 assists for 38 total points. That’s a point per game total of 0.71. The SHL product has not netted a goal since March 22, 2019, but has dished out seven assists in that time frame. Hopefully, the Slovakian native can pick up his game for the Calder Cup playoffs. The baby B’s are going to need all the scoring they can get.

Ryan Fitzgerald: Ryan Fitzgerald is another guy that overall has had a good season for Providence, despite some adversity. The former Boston College Eagle was arguably the best forward for Providence over the first few months of the season, and then injury derailed the year a little bit. In 61 games, the gritty forward has netted nine goals while dishing out 28 assists for 37 total points. This is a point per game total of 0.60. Despite this, Fitzgerald has only found the back of the net once and dished out three assists for four total points in his last 13 games. The Bruins will need the winger to pick up his play in the playoffs if they hope to capture Calder Cup immortality.

My players to watch this series

Trent Frederic: Trent Frederic has had an up and down season for Providence. It was his first full professional season, and he played well at times but also disappeared on the ice at times as well. The former University of Wisconsin Badger played in 55 games for the baby B’s as well as 15 games with the big club in Boston. With Providence, the young center netted 14 goals while dishing out 11 assists for 25 total points. That is a point per game total of 0.45. Despite this, his play has been strong as of late and he even registered his first career hattrick against Springfield in the playoff-clinching win. On top of that, he played very well against Charlotte this season netting four goals and dishing out one assist for five total points in four games against them this year. Look for him to have a big series and be crucial to the team’s success.

On the Blue Line:

Victor Berglund: This one may surprise you a bit considering he has only played in four games since coming over from the Swedish Allsvenskan league in late March, but I think he is someone that could end up playing a huge part in the Providence Bruins’ quest for the Calder Cup. In the four games he has played in he’s netted one goal and dished out 1 assist for two total points. To top it off, the young defenseman from Sweden played well overall. He looked good on the ice. The defense is something that is going to play a major role in the outcome of this series, and I think Berglund can help solidify Providence on the back end.

The Calder Cup playoffs are here, and our Providence Bruins are lucky enough to have a spot in the tournament. The baby B’s do have an uphill battle playing against not only the number one team in the Atlantic Division but also the Eastern Conference. Despite this, our boys in black and gold went 4-3-1 against Charlotte this season and over the past five seasons are 6-5-1. This means the teams are more evenly matched than stats and records may indicate. If the Providence hockey club can take both games at the Dunk this weekend, then I think they will go on to win the series. It all starts on Saturday and I hope everyone is excited. We will catch up with you next week to let you know how the team fared but feel free to send any questions or comments to me on Twitter. I hope everyone enjoys the series and Go, B’s, Go!