Bruins Need to Right The Ship…Quickly 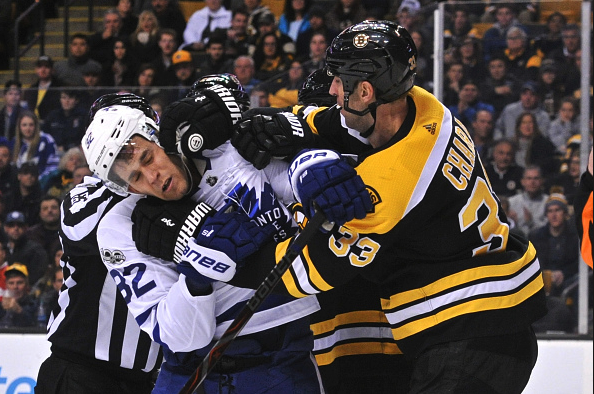 Put plainly, the Boston Bruins did not do enough to win Game 1 of their matchup with Toronto on Thursday night. You can point to the shot total and fool yourself into thinking that they outplayed Toronto, but that’s exactly what you’d be doing…fooling yourself. The Maple Leafs finished the game with more scoring chances, more physicality, and yeah… more goals. To drop the first game of the series at home by three goals is about as disappointing to Bruins fans as it is to the team itself, but the manner in which the game was lost made it even worse. The Bruins, for the better part of the game, looked disinterested, unengaged, and soft.

Brad Marchand: “I think maybe we thought it was going to be a little bit easier than it was out there.”

The Bruins surrendered far too many odd-man rushes. Amidst the myriad chances they allowed were a handful of breakaways, including a shorthanded breakaway, and subsequently a goal on a penalty shot. Boston’s neutral zone defense, which one might think would be a key point of emphasis against a team with Toronto’s speed and big-play potential, was absent. Stretch passes picked apart the defense. Gaps were poor. The speed of Toronto’s forwards wasn’t given the respect it deserved, and this became evident on several rushes.   While the Bruins’ play in their own zone was admittedly somewhat better, Toronto’s first goal was a result of a breakdown in defensive zone coverage. A tipped puck brought the attention of both Zdeno Chara and Charlie McAvoy to the crease, leaving Mitch Marner with the entire slot to himself, and enough time and space to pump one past Rask. Chara and McAvoy did not look like a top defensive pairing last night against Toronto’s skilled forward units.

It’s been said before, but Kevan Miller’s absence was notable last night. Aside from a big Connor Clifton hit in the first period, Toronto’s star forwards were able to navigate the ice sheet relatively undisturbed. For the Bruins to turn things around, this can’t continue. The Black and Gold defensive unit needs to inject a little grit into its game, and rough up the Toronto forwards at every opportunity. As good as the B’s skating on the back end is, they won’t outskate Toronto’s forwards. The fix to their Game 1 issues defensively will come in the form of smart gaps in the neutral zone and on transition, taking away time and space from Toronto in the Bruins’ own zone, and hammering them whenever the opportunity presents itself.

Toronto’s played very well tonight, but Bruins have made it easy for them. They’re really not forcing them into any uncomfortable situations.

Soft hockey won’t win in the playoffs, regardless of how skilled a team is. Hopefully, last night’s game was enough of a wake-up call to the Bruins’ back end to light a fire under their collective back end.

Too cute. Way too Cute. As easy as the Bruins’ first (and only) goal came in the first period, they looked as though they expected all of their goals to come as easy. Aside from Charlie Coyle, and David Krejci, very few Bruins forwards were driving offense and possession.

The Bruins had plenty of chances, and Frederik Andersen deserves a lot of credit for how well he played last night. But he didn’t steal the game from Boston. The Bruins simply didn’t put together enough sustained pressure to create the chances they needed to score on a good goalie. Anyone hoping for or expecting a recreation of the Bruins’ first-line dominance of last year’s series has a loose grip on reality.

Apart from the line of Charlie Coyle, Marcus Johansson, and Danton Heinen, Boston’s attack was quieted by the Toronto defense and the subsequent sustained pressure of Toronto’s attack. Any time the Bruins started to roll and pick up some much-needed momentum, they gave up a big play that put Toronto right back in the driver seat.

While the offense was not the reason why the Bruins surrendered an absurd amount of high-quality scoring chances, you can’t expect to beat a team like Toronto (or even a decent high-school team) by scoring just one goal. The aforementioned Coyle line drove much of the Bruins’ attack and accumulated a decent number of scoring chances, but was unable to bury the biscuit. The Bruins’ top two lines were essentially neutralized and unable to string together effective shifts. This can be attributed to the fact that these lines were relying too much on trying to make skill plays. The Bruins’ forwards are high-skill players, but playoff hockey is hard-nosed, fast-paced, and requires a willingness to keep things simple and get to the “dirty” areas (cliché much?) to win games.

Jake DeBrusk said it felt like the Bruins were “on the outside” tonight in terms of generating scoring chances. Most of Boston’s shots came from the wing and not from in front and driving to the net.

While it wouldn’t surprise me if Bruce Cassidy tweaked his line combinations to move some players away from matchups that hurt them last night, I do think the Bruins can win without that response. A commitment to shots on goal and sustained pressure—things that the third line did well on Thursday—will help rejuvenate the Bruins’ offense for Game 2 and likely the remainder of the series.

As far as possible line tweaks go, if something does change, it will likely be David Pastrnak coming off of Patrice Bergeron’s line. Toronto matched up against that line well, so much so that whatever chances Pastrnak did have came on the powerplay. The Bruins are at their best when Pasta is contributing to their 5v5 offense, and my guess is that we’ll see him on Krejci’s right on Saturday. In all likelihood, this will see Danton Heinen on Bergeron’s right, while Karson Kuhlman will join Coyle’s unit.

Don’t be surprised if David Backes slides into the lineup to bring some grit and toughness to the Bruins fourth unit, either.

Get real. There was nothing wrong with the goaltending. We’ve seen Tuukka stop a million breakaways as a Bruin, but you can’t give up 5 breakaways and expect him to stop them all. To his credit, he did stop a large number of high-quality chances, including a John Tavares (47 regular season goals, cute pajamas) breakaway, an Andreas Johnsson chance in a prime scoring area, and a few Auston Matthews chances that made every Bruins fan hold their breath.

As far as goaltending goes, Tuukka’s performance was no cause for concern. He’s a competitor, and losing at home will, in my opinion, only motivate him to come out and build on a solid Game 1 performance as the B’s try to turn things around.

For Bruins’ fans looking for anything to feel good about, welcome to my Spin Zone. Quite simply, as far as bad results go, this one was about as well-timed as it gets. It’s much better for the Bruins to lay down a stinker in the first game of the series, as opposed to the sixth or seventh. This way, the Bruins can clearly see where they need to improve their game early on in the series and have enough time to turn things around and win. With how relaxed they looked last night, a win might have almost been worse, as it would have positively reinforced that the series would be easy… we know now that it absolutely will not be. What a blessing for the Bruins to be shown exactly what they need to improve on so early on as far as systems, strategy, and mentality. For that, we say, “Thank you, Toronto.”

The Boston Bruins lost a few games last spring to this Toronto Maples Leafs club, and if anyone needs a reminder of the outcome of that seven-game series, I suggest you take a gander at the Youtube video below.

Interested in going to any Boston Bruins 2019 Stanley Cup Playoff games or the last regular season contests for the Providence Bruins? Take a look at the upcoming schedule and ticket availability from SeatGiant. Click the links below and use discount code BNGP to save a little cash!

—–> Click Here To Get Your Boston Bruins First Round Stanley Cup Playoff Tickets From The Great Folks at SeatGiant! <—-