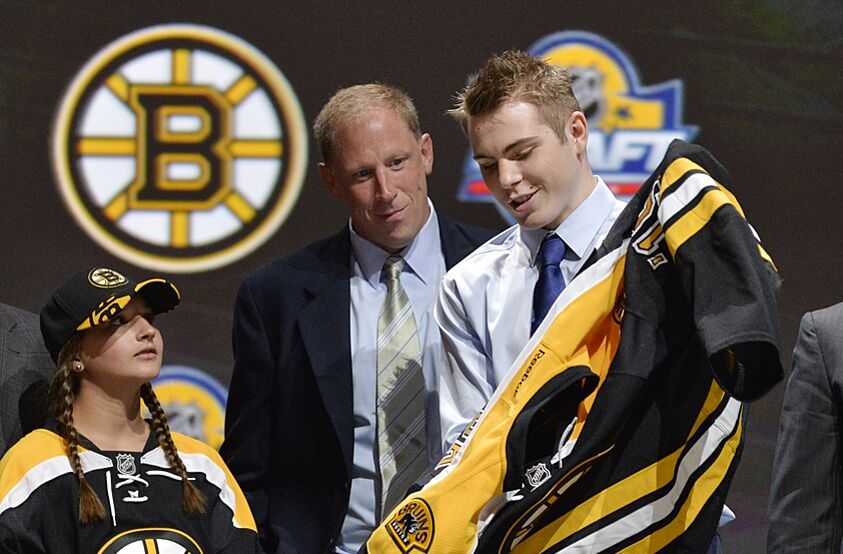 By: Lucas Pearson  |  Follow Me On Twitter @LucasPearson_
There’s no denying that this Bruins Stanley Cup roster is incredible, but how did they all get to the Bruins? Let’s take a look at their journeys to Boston.

Drafted by the Bruins in the 3rd round, 71st overall in the 2006 NHL Draft. The Bruins actually acquired this pick from the New York Islanders during the draft for their 4th and 5th round picks (who amounted to a whole lot of nothing).

Drafted by the Bruins in the 2nd round, 63rd overall in the 2004 NHL Draft. Krejci was actually another player the Bruins traded up to the draft. They acquired this pick during the draft for a 3rd, 4th, and 9th round pick.

Drafted by the San Jose Sharks 28th overall in 2010. He was a key piece in bringing Brent Burns to San Jose, getting dealt to the Minnesota Wild with a 1st and Devon Setoguchi for Burns and a 2nd rounder. Right around the trade deadline this year he was dealt to the Bruins for Ryan Donato and a conditional 4th rounder.

Drafted by the Chicago Blackhawks in the 3rd round, 90th overall in the 2010 NHL Draft. He was later traded to the Carolina Hurricanes before the 2015 season with Kris Versteeg and a 3rd rounder for a couple prospects and a 5th round pick. In 2018 he signed a two year, $2 million deal with the Bruins.

Drafted by the San Jose Sharks in the 5th round, 133rd overall in the 2011 NHL Draft. He was traded to the Bruins before the 2016 season

Acciari was signed as an undrafted free agent out of Providence College in 2015.

Drafted by the Anaheim Ducks in the 5th round, 122nd overall in the 2010 NHL Draft. After a small trade to Toronto and a couple of waiver claims later, Wagner ended up back on the Ducks. At the trade deadline last year he was dealt to the New York Islanders for Jason Chimera and after the season, he made his way to Boston, signing a two year, $2.5 million contract.

After four seasons at the University of Minnesota-Duluth, Kuhlman signed with the Bruins in 2018 as an undrafted free agent.

Originally drafted by the New York Islanders in the 3rd round, 56th overall in the 1995 NHL Draft. He was traded with Bill Muckalt and the 1st round pick that became Jason Spezza for Alexei Yashin. As a UFA in 2006, he signed with the Boston Bruins and has been with them ever since.

Another undrafted free agent signed by the Bruins in 2012 after three years at Michigan State.

Drafted by the Bruins in the 3rd round, 85th overall in the 2012 NHL Draft

Originally drafted by the Arizona Coyotes in the 5th round, 133rd overall in the 2013 NHL Draft, Clifton never signed a deal with the Coyotes and elected to sign with the Bruins in 2018.

Originally a 21st overall pick by the Columbus Blue Jackets in the 2009 NHL Draft. He was involved in a big trade when he went to the New York Rangers with Derick Brassard, Dereck Dorsett and a 6th rounder for Marian Gaborik. He was later dealt to the Arizona Coyotes with Anthony Duclair, a 1st and 2nd rounder for Keith Yandle and was signed by the New Jersey Devils in 2015. He finally made his way to Boston in 2015, signing a 5 year, $13.75 million contract.

Kampfer was actually drafted in the 4th round, 93rd overall in 2007 by the Anaheim Ducks and ended up being basically gifted to the Bruins in a trade in 2010 for future considerations. After a couple years (and a Stanley Cup win) Kampfer was traded to the Minnesota Wild for Greg Zanon in 2012, and was signed by the New York Rangers in 2014. He was traded again later that year to the Florida Panthers for Joey Crabb and in 2016, was traded back to the Rangers for Dylan McIlrath. Kampfer was brought back to Boston before this season with a 4th and a 7th round pick for Adam Mcquiad.

We all know the story here. Originally drafted by the Toronto Maple Leafs 21st overall in 2005, Rask was traded to Boston before playing a game with Toronto for Andrew Raycroft.

First drafted in 2003  in the 9th round, Halak spent a lot of time with Montreal until he was traded in 2010 to the St. Louis Blues for Ian Schultz and Lars Eller. He was then traded three times in 2014, the first being to the Buffalo Sabres along with William Carrier, Chris Stewart, a 1st and 3rd round pick for Steve Ott and Ryan Miller. Halak was then flipped to the Washington Capitals with a 3rd round pick for Michal Neauvirth and Rostislav Klesla. Finally, his FA rights were traded to the New York Islanders for a 4th round pick before free agency began. In 2018 he signed a two year, $5.5 million deal with the Bruins.
In all, this Bruins team is made up of 37% (nine) drafted players, 21% (five) acquired through trade, and 42% (10) free agency signings, although it is worth noting that four of the ten free agency signings were college free agents.

I’m excited to announce that I’ve joined the @DobberProspects team as a #Preds contributer. I would like to thank @_NickRichard & @hall1289 for this opportunity, ready to get to work!