After beginning the season on a tough Western road-trip against three playoff teams (the Dallas Stars, Vegas Golden Knights, and Colorado Avalanche) and a promising young Arizona Coyotes team, you would think the Bruins would catch a break and get to a bit of an “easy” part of their schedule. Well, after a couple of home games against the Anaheim Ducks and New Jersey Devils, the Bruins are about to enter their toughest challenge yet. Within the next week or so, the Bruins face have four massive games that, could really show what kind of Bruins team they really have this season.

The Bruins begin this stretch of games tonight at home against the all too dangerous Tampa Bay Lightning. This Lightning team is lead by one of the best first-lines in the league that consists of three bonafide superstars in Nikita Kucherov, Steven Stamkos and Brayden Point. In three games since Point returned from his injury, the trio has had a combined six goals and nine assists in those games. Touting an incredible defense lead by Victor Headman and Ryan McDonagh and Vezina winner Andrei Vasilevsky between the pipes, it will certainly be a tough start to this already challenging string of games. (To read more about tonight’s game, check out the preview by fellow Black N’ Gold Hockey Podcast writer Max Mainville here.)

After playing Tampa at home, they take a trip to their rivals in Toronto to play the Maple Leafs at Scotiabank Arena and then turn around to play those same Leafs at home three days later. Austin Matthews has been on a tear as of late, reaching the back of the net a whopping seven times in the Leafs eight games. Unlike the Bruins, secondary scoring has been the Leaf’s biggest strength this season with 14 players at or above a point every other game and they’ve had 12 different players notch a goal. The high-flying Leafs will be a little less potent without captain John Tavares, who went down with a broken finger, but it will certainly be a tough two games regardless. 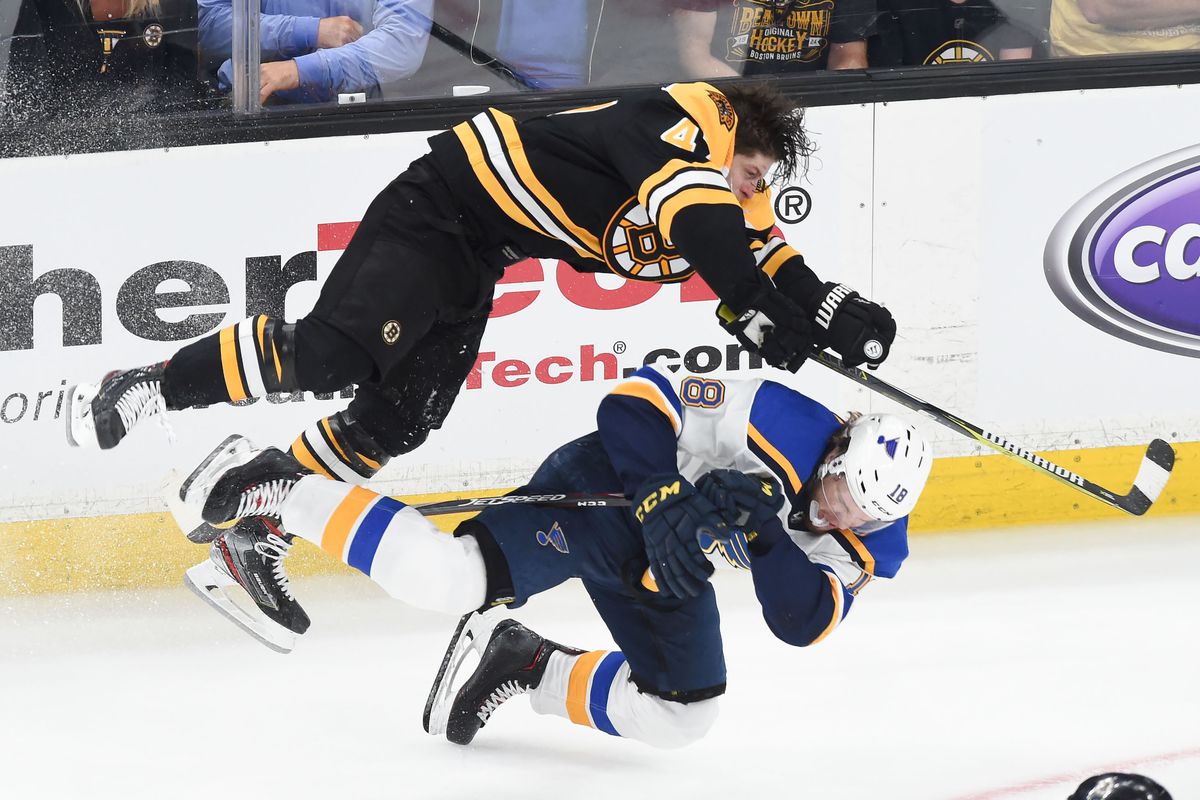 They end this stretch against the team that crushed all of Boston’s dreams last season in the Stanley Cup Finals, the St. Louis Blues. The Blues have maintained essentially the same roster we saw last playoffs aside from the departures of Joel Edmundson and Patrick Maroon, and the addition of Justin Faulk. The Blues are still the same hard-nosed team Boston saw all too much of in the Finals and have started the season well with eight points in six games. Much of the team has continued to build on their playoff success; Brayden Schenn already has five goals, Ryan O’Reilly has seven-point in six games and youngster Sammy Blais has three goals and five points to go along with a +4 rating. As we know all too well against the Blues, just because it’s a home game doesn’t mean it’ll be easy (that joke hurt to make).

So after all of this, what would really make this a successful couple of weeks for the Bruins? Well, to start,  if the Bruins were able to snag six points out of these four games, that’s a pretty big win. But the biggest win would be to overwrite the continued narrative of seemingly the past four seasons (at least) and that is to get some more secondary scoring.

While the Bruins have had a great start to the season, sitting at fifth in the league with a 5-1-0 record, goal scoring, and especially secondary scoring, has been abysmal. The top line of David Pastrnak, Brad Marchand and Patrice Bergeron have been great as they always are and have combined to score 11 goals in the B’s first six games. Well, the rest of the team has combined for just FIVE.

Jake Debrusk, David Krejci and Charlie Coyle have had just one assist apiece. Danton Heinen has looked good this season but has just one goal to his name. Karson Kuhlman, who has also looked good, has a goose egg in his points column and the revolving door of other wingers in the top-nine haven’t done much to help either. Whether it’s calling up someone from Providence (ahem, Anders Bjork) shaking up the lines (splitting up the top line) or eating some extra Wheaties in the morning, the Bruins need to figure out their scoring problem if they want to have some success in this tough group of games. The outstanding goaltending from Tuukka Rask and Jaroslav Halak can’t last for the entire year, this stretch is going to say a lot about this Bruins team going forward.

Check out the new Black N’ Gold Hockey Podcast episode 149 that we recorded on 10-11-19 below! You can find our show on many worldwide platforms such as Apple Podcasts, Google Podcasts, iHeart Radio, Spotify, SoundCloud, and Stitcher.