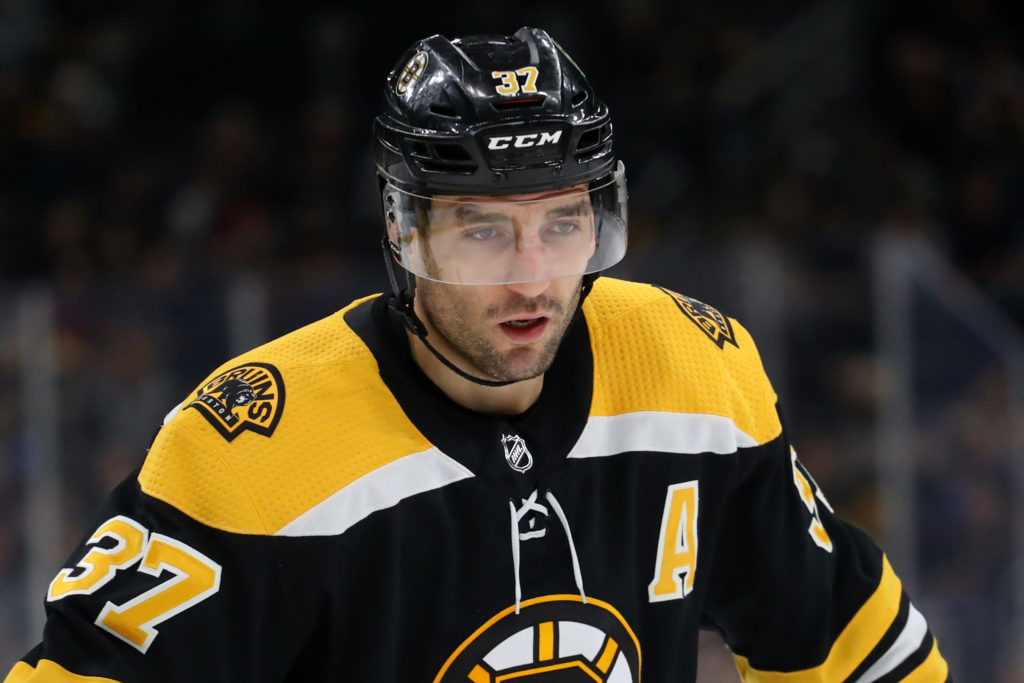 By: Yanni Latzanakis  |  Follow Me On Twitter @yanlatz
Patrice Bergeron is one of the best players to ever suit up in the Black ‘N Gold sweater for the Bruins. He has appeared in over 1,000 games while racking up almost 900 points, has taken home four Selke trophy’s as the league’s best defensive forward, a king clancy trophy, two-time Olympic gold medal champion, and of course a Stanley Cup in 2011. But best of all, Patrice Bergeron is one of the most genuine and caring individuals in the game.
In a recent video interview from TSN, Bergeron was interviewed about former teammate Gemel Smith who was going through a rough time in his life mentally as he was heading into a deep depression. It reminded the world that there is more to life than hockey. It also reminded the world how great of a person Patrice Bergeron is.

Gemel Smith was suffering with his depression in silence until Patrice Bergeron stepped in to help.

Last season, the Bruins claimed forward Gemel Smith off of waivers from the Dallas Stars. Smith only played in three games for the Bruins and was assigned to the Bruins AHL affiliate Providence Bruins. However, his short stint with the Boston Bruins was enough for Bergeron, a person who was also in a dark place at one time, to notice that Gemel Smith was not feeling himself. Bergeron explained that he knew there was stress and anxiety for a new player stepping into a whole new part of the country playing for a whole new organization but he still noticed something wasn’t right.
Bergeron initially reached out to Smith to welcome him to the team and explain that as a team and organization they were happy and excited to have him join the team. Bergeron knew that he was not in a good place and decided to help and shared some of his own stories and how he got through his hard times.
Bergeron was in a similar rough patch in life after he was hit by Randy Jones of the Philadelphia Flyers in Boston that knocked Bergeron out with a concussion that ended his season in 2007. Bergeron fell into a dark place and was having a tough time but shared with Smith and eventually the rest of the world that he got tremendous help from his family, friends such as Martin Lapointe, and a sports psychologist. He began to feel better by expressing his feelings and was able to break through the barrier of feeling alone and afraid.
Once Gemel Smith was sent down to the AHL by the Bruins, he did not forget what Bergeron told him during his short time with the NHL club. He began to see a sports psychologist and talk to his family and friends about how he was feeling. He began to feel better as he opened up about his struggles and could not thank Bergeron enough.
It is fantastic to see Smith doing well as he is now playing for the Tampa Bay Lightning organization for the Syracuse Crunch of the AHL. Appearing in 37 games so far this season, Smith has racked up 17 goals and 15 assists. Last season in 47 games with the Providence Bruins he scored 16 goals and dished out 24 assists for 40 points.

It’s okay not to be okay, end the stigma #BellLetsTalk

Wednesday, January 29th is Bell Lets Talk day, which is a mental health awareness day created by Bell Canada to spread awareness about the stigma behind Mental Health in Canada and has spread throughout the world through the help of hockey and the NHL. It is OK to not be OK! For every tweet and retweet that uses #BellLetsTalk, Bell will donate 5 cents towards Canadian Mental Health initiatives. To learn more visit their website here.
Watch the whole interview here.

Check out the new Black N’ Gold Hockey Podcast episode 162 that we recorded below! You can find our show on many worldwide platforms such as Apple Podcasts, Google Podcasts, iHeart Radio, Spotify, SoundCloud, and Stitcher.