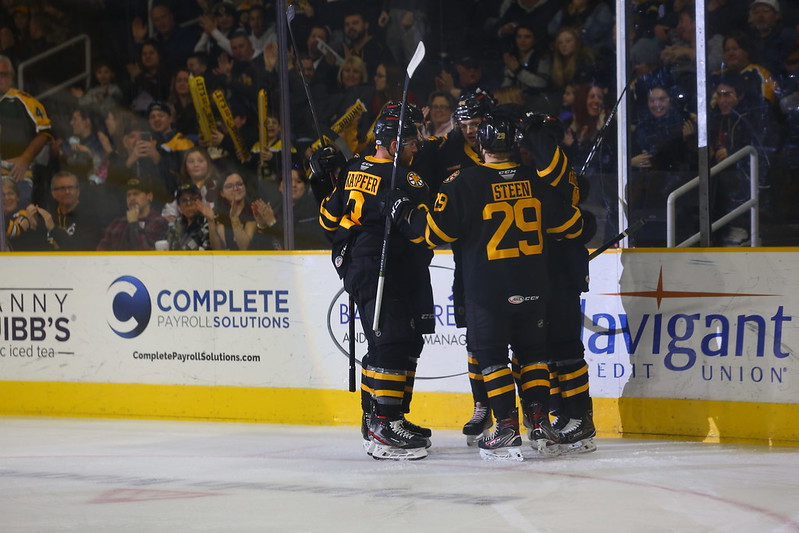 Week 21 of the AHL season as arrived. The Providence Bruins are looking to maintain their playoff position as teams make a final push towards the post-season. The Bruins skate into the week 29-18-3-3 (64 points) and 6-2-1-1 in their last 10 games. This is good for third in the Atlantic Division and fifth in the Eastern Conference. The Providence club is coming off a week that saw them beat Wilkes-Barre/Scranton 4-2. They would also beat Laval 3-0 before beating Bridgeport 3-2.

The Saturday matchup will be the ninth of 14 these two teams will have. In the first meeting, the Bruins would fall 5-2, getting goals from Peter Cehlarik and Anders Bjork. Goalie Dan Vladar was subpar in net stopping 23 of the 28 shots fired his way.

The second game saw the Bruins losing 5-4 in overtime while getting goals from Robert Lantosi, Joona Koppanen, Scott Conway, and Jack Studnicka. Netminder Max Lagace stopped 30 of the 35 shots fired his way. The third meeting saw the Providence club come out on top 5-4 in overtime. They would get goals from Jack Studnicka, Trent Frederic, Robert Lantosi, Peter Cehlarik, and Paul Carey (OT). Veteran netminder Max Lagace stopped 24 of the 28 shots he faced.

The fourth battle saw the Bruins come out on top 5-0. Jeremy Lauzon, Jakub Zboril, Jack Studnicka, Paul Carey, and Oskar Steen had the goals for Providence. Dan Vladar was out of this world in net stopping all 42 shots fired his way. The fifth game saw the Bruins come out on top 4-3. Robert Lantosi, Jack Studnicka, Ryan Fitzgerald, and Pavel Shen were the Bruins goal scorers. Dan Vladar was on his game, making 31 stops out of 34 shots.

The sixth battle would prove to be a good one. The Bruins won 5-2. Trent Frederic, Brendan Gaunce, Ryan Fitzgerald, Anton Blidh, and Karson Kuhlman would score goals. Dan Vladar stopped 26 of the 28 shots he faced in net. The seventh matchup would also be a good one.

The Bruins would win 5-3. Brendan Woods (2), Peter Cehlarik, Karson Kuhlman, and Anton Blidh would net goals. Max Lagace would go on to stop 21 of the 24 shots he faced in net. The most recent battle saw the Bruins lose 6-5 in OT. Paul Carey (2), Brendan Gaunce (2), and Peter Cehlarik had goals. Martin Ouellette stopped 24 of the 30 shots he faced.

The Springfield Thunderbirds come into the game 28-23-2 (58 points) and 5-5 in their last 10 games. This is good for fifth in the Atlantic Division and eighth in the Eastern Conference. Despite this, this is still a favorable matchup for the Providence Bruins. Over the past five seasons, the Bruins are 28-15-5 against the Panthers’ affiliate, including 14-8-2 at home.

The Thunderbirds have been winning with excellent defense. They’ve only given up 160 goals in 53 games while scoring 168. This is a plus-eight goal differential. This also means they are only giving up 3.01 goals a game while scoring 3.16. The Springfield club is 7-3 when leading after the first period. They are also 19-2 when leading after two periods. On the flip side, they are 5-10 when trailing after one period. They are also 1-17-1 when trailing after two periods.

To give some perspective to those numbers, The Bruins have given up 138 goals in 53 games while scoring 164. That is a +26 goal differential. That means they are only giving up 2.60 goals a game while scoring 3.09. The Providence club is 17-0 when leading after one period and 24-0 when leading after two. However, they are 3-11-1-1 when trailing after the first period and 1-14-1-2 when trailing after two. These two teams are evenly matched and getting and sustaining an early lead, are imperative to winning.

The home and home series will be the fourth and fifth of six matchups these two teams will have this season. In the first meeting, the Bruins won 6-0. They got goals from Tommy Marchin (2), Pavel Shen, Robert Lantosi, Jack Studnicka, and Peter Cehlarik. Goalie Max Lagace was superb in net, stopping all 38 shots fired his way. The second game saw the Bruins get shutout 1-0. Dan Vladar stopped 19 of the 20 shots he faced.

The most recent meeting saw the Bruins win 4-2. Josiah Didier, Brendan Gaunce, Joona Koppanen, and Jack Studnicka scored goals for the Providence club. Max Lagace would go on to stop 28 of the 30 shots he faced in net.

The Wilkes-Barre/Scranton Penguins skate into the contest 25-20-3-5 (58 points) and 5-4-0-1 in their last 10 games. This is good for sixth in the Atlantic Division and ninth in the Eastern Conference. The Providence Bruins have had some success against the Pittsburgh affiliate over the past five years, going 14-7-3-3.

This could be an opportunity for the Providence Bruins power-play to gain some momentum. The Penguins have taken 207 penalties in 51 games. That means they are giving up 3.98 penalties a game. They’ve also given up 38 goals out of those 207 penalty kill opportunities. That’s 81.6%, which is good for eighth in the Atlantic Division and 11th in the Eastern Conference. This seems like the perfect storm for the Providence club to gain confidence on the power-play.

Wilkes-Barre/Scranton is also excellent when they get an early lead and keep it. They are 12-2-1-1 when leading after the first period and 13-0-1-1 when they are leading after the second period. The home and home series should be a close one. These two games are ones the Providence Bruins need to win to maintain their playoff spot.

Who’s Hot and Who’s Not

Brendan Gaunce: Brendan Gaunce is in his first season with the Providence Bruins. The veteran forward spent the beginning of his career in the Vancouver Canucks’ system. In 43 games this season, he’s netted 14 goals while dishing out 13 assists for 27 total points. This includes netting three goals and dishing out two assists for five total points in his last six games. He’s also coming off an excellent weekend that saw him net goals in all three games. Let’s hope he keeps it up.

Jack Studnicka: Jack Studnicka is in his first full season with the Providence Bruins. The young forward is having an excellent season. He’s fully solidified himself as the Bruins’ top prospect. In 51 games this season, he’s netted 19 goals and dished out 20 assists for 39 total points. This includes netting five goals and dishing out four assists for nine total points in his last seven games. Studnicka is also coming off an excellent weekend that saw him record a point in all three games.

Robert Lantosi: Robert Lantosi is another guy that is in his first season with the Providence Bruins. The young forward came to Providence after spending last season in Slovakia. In 44 games this season, he’s netted 10 goals while dishing out 18 assists for 28 total points. This includes dishing out three assists for three total points in his last eight games. Despite an overall excellent season, his production has slowed down. Let’s hope he can find his offensive game this weekend.

Paul Carey: Paul Carey is in his first season as the Providence Bruins’ Captain. Overall he’s had an excellent season. In 52 games, he’s netted 18 goals while dishing out 15 assists for 33 total points. This includes netting one goal and dishing out two assists for three total points in his last 10 games. Despite his All-Star season, his production has also slowed down a bit. Let’s hope the former Boston College Eagle can find his offensive game soon.

Jack Studnicka adds his sixth shorthanded goal of the season by pulling off “The Forsberg.” Studnicka read and disrupted the play at his own blue line to win the puck and went off to the races. He accelerated, separated, cut inside and dangled. He’s the real deal. #NHLBruins pic.twitter.com/p2p6spaoVR

My Players To Watch This Weekend

Trent Frederic: Trent Frederic has had an excellent season for the Providence Bruins. In 50 games, he’s netted seven goals while dishing out 19 assists for 26 total points. The 26 total points are a new career-best for the former University of Wisconsin Badger. The young forward has also played well against the Bruins’ two-weekend opponents. In 10 games against Springfield and Wilkes-Barre Scranton, he’s netted two goals while dishing out eight assists for 10 total points. Look for him this weekend.

On The Blue Line

Jakub Zboril: Jakub Zboril is a guy who has had an up and down season with Providence. In 49 games this season, he’s netted two goals and dished out 10 assists for 12 total points. Despite his offensive numbers not being there, he’s played better this year than last. In nine games against Springfield and Wilkes-Barre/Scranton this season, he’s netted one goal and dished out three assists for four total points. Look for him to have a big weekend.

How strong is Trent Frederic? Here he is puck-carrying through the NZ while a defenseman lines him up for a big hit. The defenseman commits to the hit, Frederic lowers his shoulder and not only stands him up, but just completely drops him with a harder hit. #NHLBruins pic.twitter.com/GPoxiwCrSQ

The Providence Bruins are sitting firmly in a playoff position. Their games this weekend are against teams below them in the standings. This means they should come away with at the very least four points when all is said and done. This would help cushion their spot in the Atlantic Division. It should be an exciting weekend of hockey that you do not want to miss. Feel free to send me any comments or questions on Twitter. As always, GO, Bs, GO!