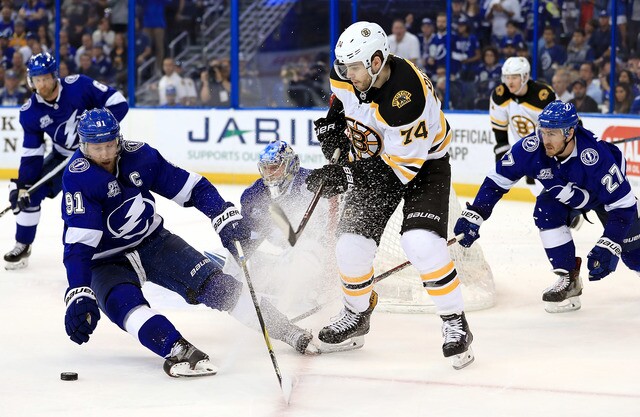 It was going to be a physically fast game and the Boston Bruins came out victorious as they defeated the Tampa Bay Lightning 2-1 tonight at the Amalie Arena.

The Bruins were more than ready to face the Bolts and with the start of the first period underway, the boys in Black and Gold kept momentum on their side. Shots favored the Bruins 13-to-9  and despite some push back from the Lightning, Boston would get on board first. With 55 seconds left in the period, Brad Marchand (who was a game-time decision) would tip in his 28th goal of the season, putting the B’s up 1-0.  Both teams each drew a penalty in the first period and had many golden opportunities to score (including a potential short-handed goal from Boston).

Continuing with the fast pace, Boston pushed hard towards the net with many missed chances early in the second period, forcing Andrei Vasilevskiy to make multiple saves.  As the Bruins tried to keep momentum on their side, Tampa Bay’s Yanni Gourde would score. However, Boston would challenge for an offside and the goal was reversed, stomping out hopes for a tie.  Moments after, the B’s would draw a penalty but the Lightning limited Boston’s shots on goal. With ten minutes left in the second period, Boston’s Jake DeBrusk would net the second goal of the night, ending a personal 10-game point-less drought.

As frustration grew for the Lightning,  Tampa Bay persisted with their game plan and was able to cut the lead in half as Mitchell Stephens scored his third goal of the season. With mere seconds left in the period, tempers flared between the teams as both Joakim Nordstrom and Yanni Gourde traded shots.

In the final period, the Bruins slowed the pace down in order to keep control of game-flow. The Bolts had a potential goal on a breakaway but were unable to capitalize as Tuukka Rask blocked their attempts.  With the Lightning hot on their heels, Boston had a hard time clearing the puck out of their zone. With time winding down,  the Bolts continued to put pressure on Boston but were unable to mount any sort of comeback. In the final minutes of the game, the Bruins kept the Lightning at bay. Boston would go on to win their third game in a row.

With the victory over the Bolts,  the Bruins widen the gap in the Atlantic Division with nine points over Tampa Bay. They improve their record to 42-13-12 while the Lightning are second in the league with a respectable 41-20-5 record.

Celebrate tonight's win in Tampa with the postgame infographic, presented by @CDWCorp. 🙌 pic.twitter.com/OfKMufyJeK

Check out the new Black N’ Gold Hockey Podcast episode 168 that we recorded below! You can find our show on many worldwide platforms such as Apple Podcasts, Google Podcasts, iHeart Radio, Spotify, SoundCloud, and Stitcher.