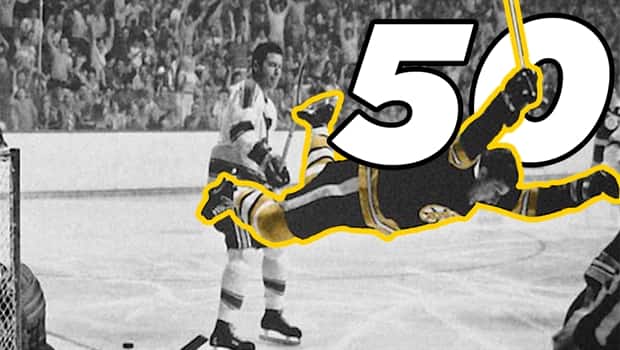 “Cleared, but not out. Bobby Orr… behind the net to Sanderson — ORR! BOBBY ORR! SCORES! And the Boston Bruins have won the Stanley Cup!”

Awesome way for @NHLBruins fans to celebrate the 50th anniversary of the 1970 Stanley Cup Winning team: share their love for how the famous #BobbyOrr goal was called!
🎙🏒🥅 🚨 @BlackNGoldPod #nhlbruins #HockeyTwitter pic.twitter.com/U2ElSty6QQ

When heralded hockey broadcaster Dan Kelly made that famous call on May 10th, 1970 (not to take anything away from the brilliant voice of B’s broadcast legend Fred Cusick), little did Kelly or anyone else know just how memorable or iconic it would become.

Now, fifty years to the day later, the Boston Bruins organization is celebrating it — and the team’s epic Stanley Cup-winning ’69-’70 season altogether — by asking fans to recreate how they would’ve voiced “The Goal.”

As Bruins celebrate 50th anniversary of 1970 title, it’s a good time to see where Bobby Orr’s golden goal ranks on @BuckinBoston‘s list of the 20 best broadcast calls in Boston history

In case you’d like to hear “The Call” in its entirety… look no further than another great online resource: Youtube!

As for this lifelong Bruins fan and former sports broadcaster, This Date in Bruins History will always be a special one for me… even if I didn’t get to experience it live and in person. It was the moment my dad and grandfather chose to introduce me to B’s fandom. It was how I learned to bleed BLACK N’ GOLD for the first time — by watching Orr score over and over and over.

I’ve got a sentimentally satisfying story for the @BlackNGoldPod blog: “Broadcasting Bobby” — 50 Years Later! for my OTDIH @NHLBruins series🐻🏒🥅🚨🏆 pic.twitter.com/j7kiuvaUal

And with so many fellow fans and Boston buddies doing the same thing right now, it’s as if Orr’s moment in history has once again becoming living history…

… As lifelike as the stunning statue soaring high above the ground outside TD Garden itself!

The sculptor of the Bobby Orr “The Goal” statue, which stands outside TD Garden, reveals the crucial role the Bruins legend played in creating the piece. https://t.co/8r4jp1z84z pic.twitter.com/dzjHp1chXE

Check out the new Black N’ Gold Hockey Podcast episode 177 that we recorded below on 5-3-20!