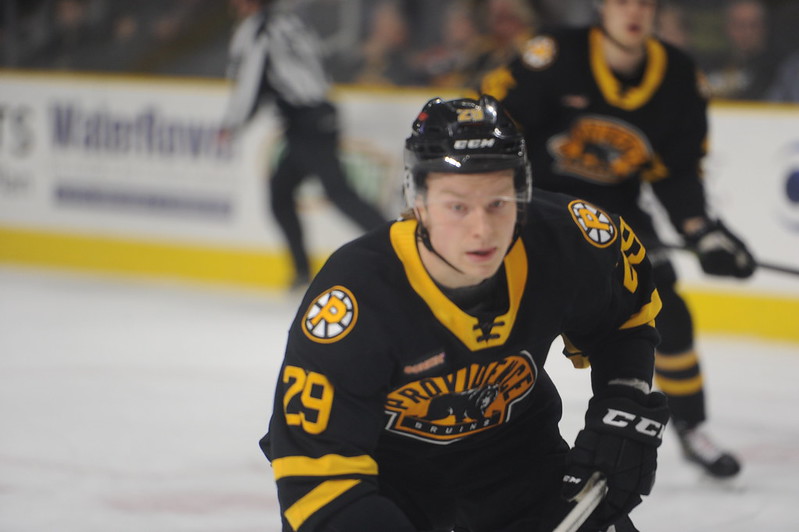 I am continuing my prospect season review with a player I like a lot, Oskar Steen. The Swedish forward was drafted in the sixth-round, 165th overall in the 2016 NHL draft. The 2019-2020 season Steen’s first in North America. He was coming off a breakout season with Farjestad BK of the Swedish Hockey League that saw him net 17 goals while dishing out 20 assists for 37 total points in 46 games played (stats courtesy of EliteProspects). Let’s dive into his 2019-2020 season and see how he did as a rookie.

Great feed from Trent Frederic and an even better finish by Oskar Steen on this 2-on-1 short-handed goal. The fights from Frederic are exciting, but he’s got plenty of skill and creates frequent opportunities. Steen started slow, but he’s been taking off as of late. #NHLBruins pic.twitter.com/Dcmv7QatbG

Oskar Steen shows off a good stick lift in the NZ to win the puck and gain a 2-on-1 chance. He opted for the shot and got a good one off that handcuffed the goalie a bit. Steen played center yesterday and looked far more engaged and active there than he has at wing. #NHLBruins pic.twitter.com/IsUoOXYNDw

Steen had the type of rookie season you can build on going forward. That’s all we could ask for in his first season on North American ice. The young center also displayed some integral parts of his game this year. One of those things was his intelligence on the ice. He’s able to read and react to a play quickly. It’s impressive for a young player to have that ability. He also proved to be a versatile player. He can play center as well as play wing. This is going to bode well for him moving forward with his development.

Oskar Steen snaps his 11-game drought and wires one home from the high-slot. Steen is at his best when he has the puck and the confidence to shoot it from around the net, slot or circles. Steen, 21, has been up and down this season. He definitely needed this one. #NHLBruins pic.twitter.com/VWrYsyzbDX

Steen was also able to show off his speed this season. He accelerates quickly and can move up and down the ice well. Finally, Steen is a good passer. He can see the passing lanes well, and get the puck where it needs to go. The young center also has a motor that doesn’t quit. He’s always moving on the ice. What happens next for the native of Sweden? I believe he will end up playing most if not all of next season in the AHL with Providence. While he had a successful first season, he still needs to gain some consistency in his game. I do think he will push for a roster spot in 2021-2022.

Oskar Steen gets the Bruins on the board against New Jersey. Watch Steen as he gains the line, skates towards the top of circle and lets his deceptive, quick, lethal snap-shot fly. If Steen isn't on your radar yet, you might want to put him on it. #NHLBruins pic.twitter.com/xHfTo0gsYw

Oskar Steen may end up being the steal of the 2016 draft. He’s the type of player that could end up being a middle-six forward for many years to come. I’d expect Steen to be part of the next crop of young core players coming through the system. He’s going to be exciting to watch for a long time. I hope everyone is staying safe. Feel free to send me any questions or comments on Twitter. As always, GO, Bs, GO!

Check out the new Black N’ Gold Hockey Podcast episode 191 that we recorded below on 8-23-20! You can find our show on many worldwide platforms such as Apple Podcasts, Google Podcasts, iHeart Radio, Spotify, SoundCloud, and Stitcher!