How The Boston Bruins Scored Their Goals in 2019-20 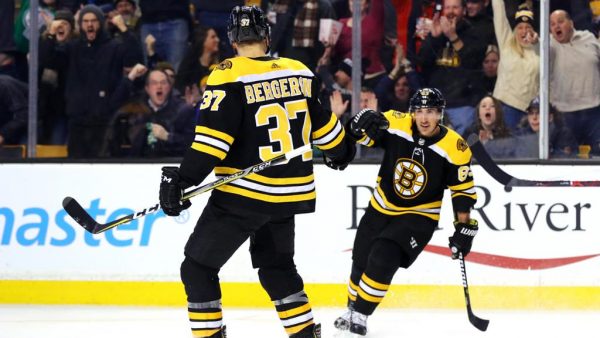 By: Max Mainville | Check me out on  Twitter @tkdmaxbjj

Goals in the National Hockey League are hard to come by. While the skill of the forwards and defenceman on the ice are arguably the most advanced overall that we have seen in the sport’s history, the players that defend the goal in between the pipes have also improved over the years. Players such as Washington Capitals forward Alexander Ovechkin who can consistently score at this time in the game make it all the more impressive.

In 2019-20, the Boston Bruins had the Maurice “Rocket” Richard winner in David Pastrnak, who scored 48 times, nearly the first Bruin to score 50 goals in a season since Cam Neely did it back in the 1993-94 season. Having won the Presidents’ Trophy as the best team during the regular season, the Bruins were bound to have scored a decent number of goals – 227 to be exact, tied for the seventh-most in the league. 57 of those tallies were on the power-play, tied for second-most in the NHL.

As most hockey fans know, there are many different ways to score those goals. Wrist shots are fast, precise, and don’t require a lot of wind-ups. Slapshots usually generate the most power due to the massive wind-up and typically come from the blueline or a booming one-timer. Snapshots, similar to wrist shots, have a very fast release and are great for firing on the net while in stride. Then, we have tipped and deflected goals. With those, the main goal is to re-direct the path of the shot to confuse the goaltender. Without further ado, let’s get into this.

During the season, the Bruins scored 118 wrist shot goals, the eleventh-most in the league. Pastrnak led the team with 19 followed by Bergeron (17), Marchand (16), and DeBrusk (12). Aside from Pastrnak, it makes sense Bergeron is second on this list. Patrice is known for scoring goals in the “bumper” spot, a position on the ice off to the side of the slot, but closer to the crease from the faceoff circle.

Brad Marchand has a great wrister and Jake DeBrusk is starting to come into his own when it comes to depth goal-scoring alongside second-line center David Krejci. Not many defencemen scored wrist shot goals on the team, as Charlie McAvoy scored three of them last year.

Pastrnak scored eight snapshot goals last season while Bergeron scored six. Again, Bergeron’s infamous bumper spot allows for a lot of these types of goals and Pastrnak has scored his by using his speed and elusiveness to drive into the zone and fire those quick shots.

As mentioned above, slapshot goals largely come from two places – the blueline and off of one-timers. David Pastrnak not only led the Bruins in this stat but led the entire league with 15 slapshot markers. A ton of these goals come from the cross-ice passes that set up Pastrnak all alone for a heavy slapper, making it extremely tough for the goaltender to slide over in time to make the save. The Czech Republic native often had Torey Krug to feed him these passes and as the top players on the team got better together, the plays got more and more impressive.

Torey Krug (5) and Zdeno Chara (4) were second and third on the B’s for the heavy bombs from the point and that comes to no surprise as both were quite active in shooting towards the net with those slappers, oftentimes creating second-chance scoring opportunities but as I just displayed, they sometimes beat the netminder on their own.

Tipped and deflected shots are indeed different. NHL.com provides the statistics of these two goal numbers, but do not explain the difference. However, I believe a tipped goal is when the shot is tipped along the ice whereas a deflected goal is either off of a body or a stick in the air – usually from a point shot.

Bergeron led the Bruins in tipped goals with four followed by Marchand and Pastrnak each with three. That top powerhouse line for the Bruins used brilliant spacing and awareness to make slick passes. A lot of the time, one of the three would race towards the net from the back door and beat the goalie. The chemistry that line has is one of the most entertaining things for hockey fans to watch.

Essentially, all of these stats show how well-rounded the superstar forwards of this team are. David Pastrnak can truly score in any way using the incredible finesse that he has and Patrice Bergeron is one of those hard-working players that always find ways, even if sometimes it’s not the prettiest goal, to score on the opposition.

Not only were the Bruins good at scoring, but it also didn’t matter when they scored for them to win games. Last season, the Black and Gold had a 26-7-8 record when scoring the game’s first goal and had an 18-7-4 record when the opposing team scored first. Boston was 12-4 in one-goal games, going undefeated (5-0) at home in the TD Garden.

Interestingly, the majority of the goals scored by Boston last year came in the third and final regulation period when they scored 82 goals followed by 71 in the second and 68 in the opening frame. It’s no secret that the Bruins were sometimes slow out of the gate and had to come back in a lot of the games, but as their record showed, they were able to win them. If they had a lead, however, they rarely lost. With a lead after the first 20 minutes, the B’s had a record of 24-5-3 and an even better record of 28-1-6 when they lead the game after 40 minutes.

Now, heading into the 2020-21 season, will the Boston Bruins be able to keep the goal-scoring up or will we see a decrease? Brad Marchand and David Pastrnak will miss time to begin the year while the loss of Torey Krug in free agency will slow down some of the power-play effectiveness and takes away one of your supreme playmakers. Let me know what you think via Twitter @tkdmaxbjj!

Statistics and information courtesy of nhl.com and hockey-reference.com.