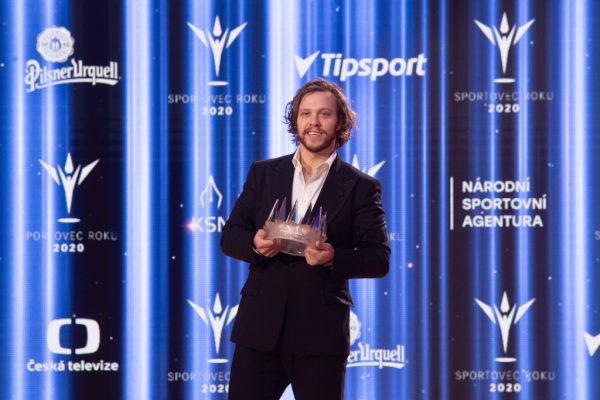 All hail King David as the 24-year-old Boston Bruin was named Athlete of Year in Czechia (or the Czech Republic as you may know it). Pastrnak became the first hockey player since 2005 to win the award, which was previously captured by fellow countryman Jaromir Jagr. The forward can now add that to his resume which includes winning the Czech Hockey Player of the Year title four consecutive times (once again matching Jagr).  Speaking with reporters (and written in loosely translated Czech) Pastrnak stated:

“Unbelievable, I could never have imagined that I could become the Athlete of the Year like them. After all, hockey is a collective sport, so individuals are viewed differently.”

The award, which is officially called the Sportsperson of the Year (Sportovec roku-Czech) is given to the best athletes and teams of the Czech Republic. The event was moderated by Daniela Písařovicová.  It is given to athletes who are voted by 214 journalists of the Sports Journalists Club (Klub sportovních novinářů, KSN).  Pastrnak is the fourth hockey player in the award’s 62-year history to capture the honor, joining Jagr, Dominik Hasek, and Josepf Mikolas.

In the Athlete of the Year poll, Pastrnak was among the top ten, jumping from fourth to third in previous years until his recent win in 2020. Since 1993, the award is accompanied by a crystal crown. The Czech native collected 1,253 points and won the award convincingly. Second place went to skier and snowboarder Ester Ledecka. The only other hockey player to place in the top ten was Tampa Bay Lightning forward Ondrej Palat, who finished sixth with 915 points.  From translated Czech, the Bruins forward stated:

“The most beautiful gift I could have received this Christmas. The crown is beautiful. Exactly magnificent. They made me a great Hall of Fame at home, so the crown will be under the tree first, and then in the most important place among all the trophies and awards I’ve won in my career so far.”

As the Bruins gifted fans an early Christmas present when they shared photos of players skating at the Warrior Ice Arena,  news of Pastrnak’s rehab came way of President Cam Neely. He spoke recently about the young forward’s return to Boston while continuing to rehab from a hip labral repair done arthroscopically (performed on September 16th). The projected recovery time is about five months. The hope is that both Pastrnak and Brad Marchand (who underwent a sports hernia repair on September 14th) will be ready sometime in February.

Although Neely couldn’t project a potential return-to-play date, he did offer some positive news on his top two forwards during a media call on Monday:

“Yeah, no other injury concerns right now as far as I know. And as far as hard dates it’s hard to put a hard date on those guys. Brad I know has been on the ice a couple times which is a good sign. David recently got back into town and will continue his rehab. I’m sure you know we can get you some dates as things progress here, but right now I don’t really have any hard dates for you.”

Pastrnak scored 48 goals last season, tying with Washington Capitals forward Alexander Ovechkin. Both players led the league in goals and were awarded the Rocket Richard Trophy. The Bruins forward also had a career-high of 95 points in 70 games. He finished the shortened season with 47 assists.