On This Day: Boston Bruins Attack the Stands in 1979 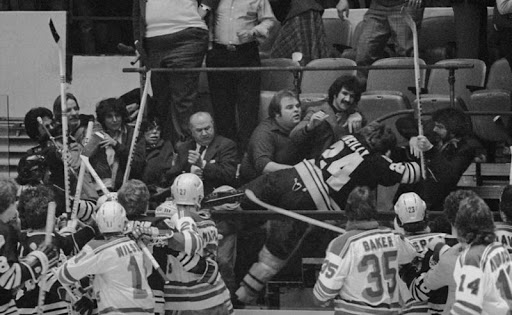 Historic franchises like the Boston Bruins have often been around for so long, that a character, no matter how much time passes – will always be associated with them. Ask any longtime hockey fan and the Boston Bruins were not called by their actual team name, no. They were known by most as the ‘Big Bad Bruins’.

Of course, during the early days of the National Hockey League, fighting was a typical event during a game. Fans often went to hockey games in hopes of seeing gloves sprawled across the ice surface, fists being thrown at helmet-less heads, and the resulting penalties that left players stranded in the sinbin for minutes. The Bruins, often in their heated rivalries with fellow Original Six combatants, participated in their fair share of brawls. However, none were quite as bizarre as the brawl on December 23rd, 1979.

The Bruins came into this Sunday night matchup as one of the best teams of the 1979-80 regular-season. The B’s had a 19-9-5 record and were taking on a Rangers team that was hovering just around the .500 mark with a 16-15-5 record. Boston was coming off of a 5-2 loss to the Philadelphia Flyers which was a game after a 10-0 blowout of the Toronto Maple Leafs.

Rangers’ Mario Marois opened the scoring in the first period and gave the Blueshirts a 1-0 lead into the first intermission. Bruins’ forward Rick Middleton evened up the scoresheet in the middle frame, but New York scored two more before the end of the period to take a 3-1 lead heading into the final regulation period.

In that final twenty minutes, Terry O’Reilly and Bobby Lalonde scored a power-play goal each to equal the score at three apiece – leading to Stan Jonathan’s sixth goal of the season to give Boston the 4-3 advantage – the goal that would end up being the deciding marker in this game, giving the B’s a win on the road.

Now it is important to note that this game was very physical. Fights and penalties filled the stat sheet and tensions were flaring on both sides. As the final buzzer rang, officially awarding the win to Boston, pandemonium ensued.

Bruins forward Al Secord started things off with a sucker punch to Rangers forward Ulf Nilsson as the players started to head to the locker rooms, saying it was “an eye for an eye” as Nilsson sucker-punched Secord earlier in the game. As both teams got into a scrum, a New York Rangers fan by the name of John Kaptain reached over the low-level glass and used a rolled-up program to hit Stan Jonathan in the head, drawing blood. Kaptain also took the stick of Jonathan’s right out of his hands.

“He just reached over the glass and whacked me with it,” Jonathan said. “I put my stick up to protect myself, and he just took it, and I can’t be hitting no fan with a stick, really, eh, so I just let him take it.”

Terry O’Reilly, known for his bruising attitude and constant fights throughout his career, racking up the most penalty minutes in franchise history with 2095 PIM, immediately stepped up to defend his teammate. O’Reilly climbed over the glass to go after Kaptain who still had possession of Jonathan’s stick. Once the rest of the Bruins saw O’Reilly charge the stands, they followed suit.

Before long, the majority of the players in Black and Gold were in the stands throwing fists with fans in the Madison Square Garden. Kaptain was able to get free of O’Reilly who said in an interview that he was attempting to detain the fan and headed up the rows of seats until Peter McNab and Mike Milbury chased after him, eventually grabbing ahold of the New Jersey native, bringing him back down to the ground.

It was at this moment that Milbury removed the shoe of Kaptain, gave him a whack, and tossed the shoe onto the ice as a sign of dominance, I guess.

“I grabbed his shoe, took a little tug on it, and then sort of double pumped,” Milbury said. “I don’t know if I hesitated for a minute because I thought I’d be vilified for the next 30 years, but I gave him a cuff across the leg, and then I did what I thought was probably the most egregious thing of all: I threw his shoe on the ice.”

Long after the ordeal, a group of roughly 300 Rangers fans rocked the Bruins’ team bus and had to be dispersed by eight local police officers.

John Kaptain, his brother, James, his father, Manny, and a friend, Jack Guttenplan were charged initially with disorderly conduct but were dropped at a later date. The fans also opted to not press charges on any of the eighteen Bruins who attacked the stands, including Milbury, McNab, and O’Reilly.

That doesn’t mean the Bruins got away without punishments, though. Terry O’Reilly was subsequently suspended for eight games, while Mike Milbury and Peter McNab were suspended for six. All of them were fined an additional $500 and all the other members of the Bruins roster were also fined up to $500. All except goaltender Gerry Cheevers who wanted nothing to do with the incident from the beginning, jokingly saying “I was already on my second beer”.

Not long after this dramatic event on the night of December 23rd, 1979, the league made the decision to raise the glass between the players and the fans which is what modern-day NHL fans should be used to.

Now only imagine if this happened in 2020.

Statistics and information courtesy of hockeyreference.com and nytimes.com.