Cratty: My Boston Bruins Picks For The 2017 NHL Draft

The first round of the 2017 NHL Entry Draft will take place tomorrow night, Friday, June 23. This draft is a little different than the past two in the sense that there isn’t a stud considered to be at Auston Matthews and Conor McDavid level. That doesn’t mean there isn’t a wealth of talent within the draft class. The Bruins first two selections in the draft are the most important, 18th overall and 53rd overall. Those are the picks that will be highlighted going forward. Their other selections include picks #111, 173, 195, and 204.

With the 18 overall pick, Don Sweeney attacks the team’s biggest prospect hole, the right wing position by selecting Kole Lind of the Kelowna Rockets. One major thing that will stick out to Don Sweeney is his positional versatility. What General Manager wouldn’t love a player who can play multiple positions? Lind can do that.

Where Lind will go is kind of a tossup, but Bruins fans shouldn’t be disappointed if they see Lind taken 18th overall. He is typically projected from pick 18 to late in the first round. He would add a great set of skills to a position within the organization that needs it. He was ranked 23rd on the NHL Central Scouting List for North American skaters. Lind is a player with high hockey IQ, an impressive ability to make things happen offensively and a solid shot. His high hockey IQ allows him to make plays with the best possible outcome in mind, set up offensive chances and pounce on loose pucks in the defensive, neutral and offensive zones. He isn’t the biggest kid, listed at 6-foot-1, 185 pounds according to eliteprospects.com, but that doesn’t seem to bother him.

This past season with the WHL’s Kelowna Rockets, Lind exploded for 30 goals, 57 assists, and 87 points in 70 regular season games. He then added six goals, six assists, and 12 points in 17 playoff games.

This was a massive improvement on the 14 goals, 27 assists, and 41 points he tallied in the 2015-2016 season with the Rockets. In this same season, he had zero points in the playoffs. To go from zero to 12 points during the part of the season with the highest amount of pressure shows great poise and confidence.

Another impressive facet of Lind’s game is his speed. His speed is a huge reason as to why he is so good at pushing the pace in the offensive zone especially. The combination of his many skills, mostly offensively, make him an attractive draft target. With some work on his defensive gain and physical maturity, Lind would be a welcome addition. David Pastrnak has clearly surpassed prospect status and Zachary Senyshyn needs some company in the right-wing core. Insert Kole Lind. 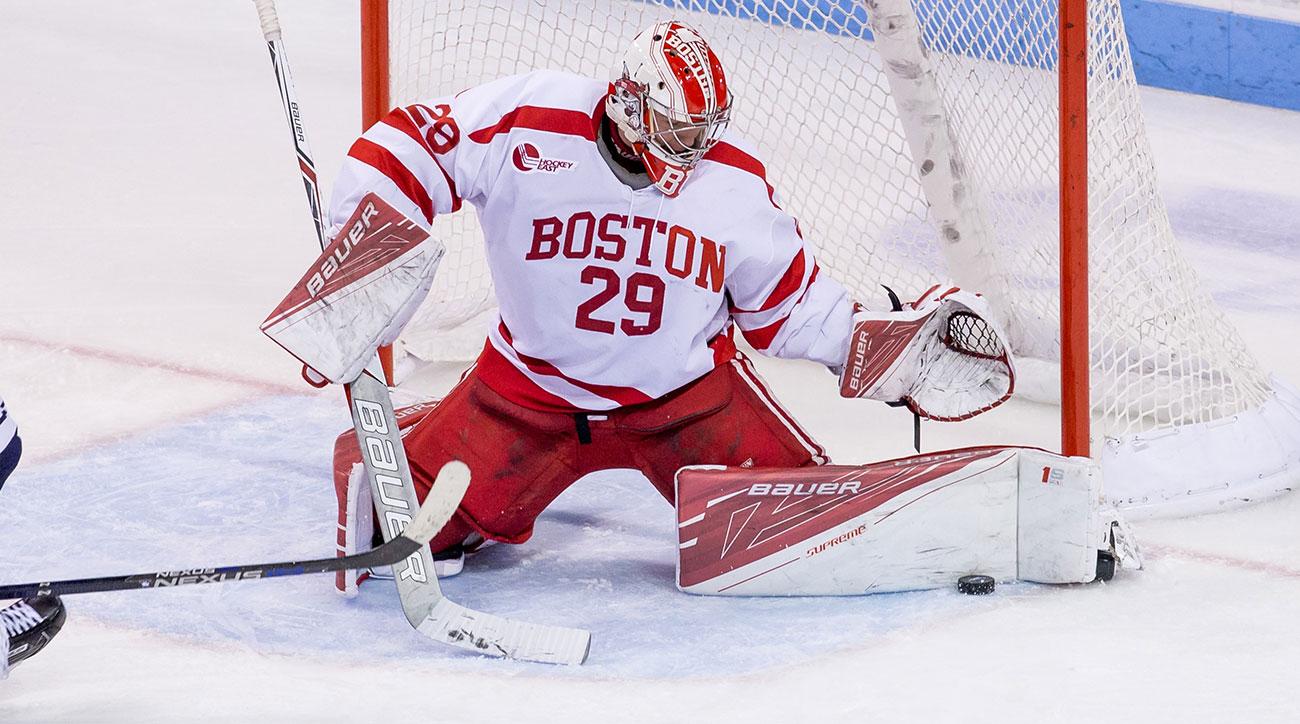 The Boston Bruins need a high-end elite goaltender prospect. They can get one this year and Jake Oettinger would be an excellent choice. Goaltenders are a bit trickier to project and evaluate than centers. Oettinger could very well be taken before pick #53, but his projections show him as a late first-round to second round prospect and possibly the first goalie off the board.

Having seen Jake Oettinger hold down the crease live numerous times, as well as on TV, he plays well above his age. As just a freshman this past year playing in Hockey East, one of the toughest conferences to play in throughout the NCAA, he was one of the nation’s top goaltenders. His poise, talent and athletic capabilities in the net are top notch. He displays excellent vision as well which makes tracking pucks easy and allows him to see the play in front of him at a high level.

He is a tower in the crease at 6-foot-4, 205 pounds according to eliteprospects.com and moves very swiftly and effectively for someone of that size. NHL Central Scouting has Oettinger ranked as the #1 North American goalie in this year’s draft class. He led Boston University to the quarterfinals of the NCAA tournament before falling to tournament finalist, Minnesota-Duluth. Oettinger’s endurance was tested in the two NCAA tournament games he suited up for. The Terriers first round matchup went to double OT against the University of North Dakota, then OT against Minnesota-Duluth. Both games in which Oettinger played very well in.

In 35 appearances with the Boston University Terriers, Jake Oettinger finished his freshman year with a record of 22-11-3, a 2.11 GAA, and a .927 save percentage. Extremely impressive numbers for any goalie, nevermind a freshman. Oettinger is a guy that I see as an elite NHL goaltender someday and Sweeney would be foolish not to take him, if he’s available, at 53rd overall.

If Don Sweeney manages to snatch up Lind and Oettinger, Bruins fans should be very happy. The Bruins would address their two biggest prospect needs and add some more talent to be excited about down the road.