PuckNerd: My Bruins Picks for the 2017 NHL Draft 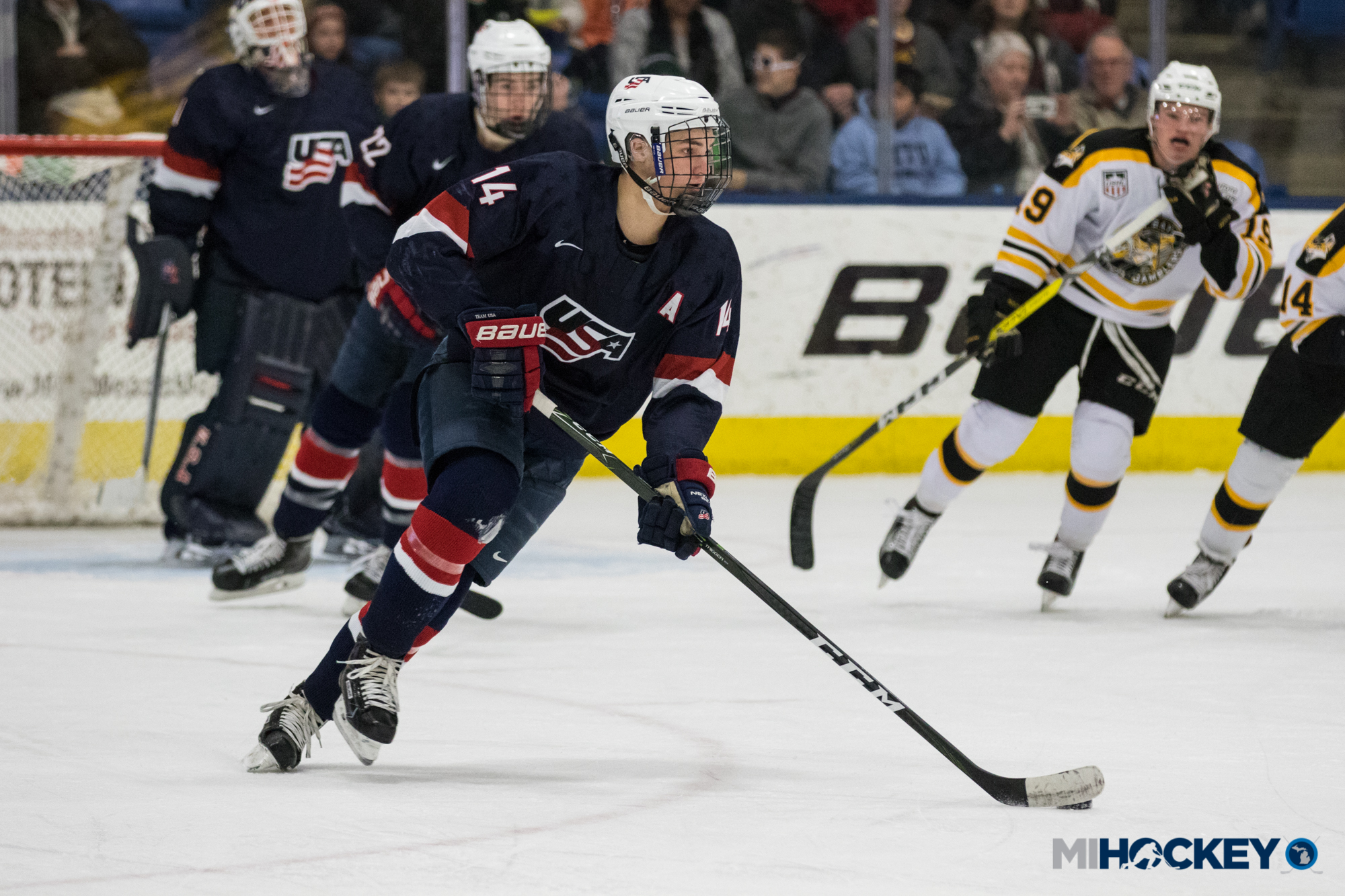 So, has everybody been able to recover after last night’s Expansion Draft? Well, too bad! It’s Draft Time! This is quite literally my favorite time of year, so I thought I’d provide some insight into who the Bruins will take in one of the wildest draft years in recent history. I want to start with a disclaimer – while this draft likely does not have a generational talent in the mold of Auston Matthews or Connor McDavid, this is by no means a weak draft. In fact, it seems to be one of the deeper ones in recent memory, as there is a tremendous amount of uncertainty and possible fluidity between picks 11 and 60. This causes quite a bit of trouble when attempting to project who will be taken at a specific pick within that range. Both players I will be discussing fall between the Bruins’ first two picks (18 and 53) in consensus rankings. Now, with that out of the way…

In the First Round, at 18th Overall, the Boston Bruins are proud to select from the US National Team Development Program in the USHL, center Joshua Norris. Norris has been a curious prospect all year. He has been praised for his two-way acumen – something that we know this Boston regime covets in their offensive picks. This is not why I think he makes a lot of sense, however. First of all, I would like you to all look at the Bruins’ prospect depth chart in the middle of the ice… Jakob Forsbacka Karlsson, and that’s it. I don’t particularly like drafting for need, but David Krejci and Patrice Bergeron are both 31, and David Backes is 33. Someone eventually is going to need to play center for this team.

Norris’ primary asset is the one that I covet the most in a young player – Hockey IQ. This is the one skill (apart from height) that you cannot teach. Either a player has it, or they don’t. Players who think the game at a higher level can find ways to outperform their potential shortcomings, whereas a player who relies solely on their physical abilities can sometimes crash and burn at the next level when, suddenly, everyone else has the same physical abilities. Norris is more quick than purely fast at 6’1”, 192 lbs, but is not slow by any means, and will head to the University of Michigan next fall. He also wore a letter at the USNTDP program this year, which shows that he is a high character individual. He put up 60 points in 61 games this past year and provides a wicked wrist shot and unabashed ferocity in the middle of the ice. Oh, and he also obliterated the NHL Combine. So, on top of his high-end hockey IQ, he clearly has the physical abilities to be successful at the next level. I see him as a potential Top 6 centerman when the current roster begins to be phased out due to age, and since he will be attending Michigan for at least next season, they can afford to allow him to develop until he is actually ready to step into the lineup.

With their second pick, 53rd Overall, the Boston Bruins select from Brynäs IF of the Swedish Elite League, forward Jesper Boqvist.

While most people have Boston taking a goalie here, I think that there is too much value to pass up on with Boqvist. He is an offensive wizard, who can play all three forward positions, and part of the reason he potentially is available at this point is a year that is perceived to have been a struggle. He scored zero goals and 6 assists in 16 games for Brynäs, then only 12 points in 19 games after being sent to Timrå IK in Sweden’s second division. However, he is 18 years old and got into 16 games in the SWEDISH ELITE LEAGUE. He wasn’t just along for the ride either, as shown by his 6 assists. This is a professional league, one of the best outside of North America, and Brynäs apparently believes that he has the ability to already play at that level. Receiving playing time at that level cannot be understated as it translates to the NHL, and Boqvist could be a perfect complement to a David Pastrnak or Zach Senyshyn in a few years.

In the next 72 hours, Boston needs to stand pat and make its picks. Nothing crazy, don’t reach, just take the best player available at each pick. With a prospect pool as deep as theirs, there is no need to reach for a specific position or player type at any point in the draft (this should not be done anyways, but GMs be GMin’). Keep an eye on overage defenseman Jack Achan and USHL goaltender Maxim Zhukov in the later rounds as potential steals, and Russian winger Klim Kostin if he manages to fall to the 18th pick. Kostin is another player who received playing time in a professional league (the KHL) this year but struggled with injury problems and inconsistency that spawned from the time he missed and the fact that he played for four different teams throughout the season. He’s also Russian with a KHL contract, which tends to be a turn-off for NHL teams. However, were his name Joe Smith, and he played in Kitchener, he would, without question, be a Top 5 pick. With a deep pool of prospects, the Bruins can afford a gamble at that point. Also keep an eye on Timothy Liljegren, who was a Top 3 player in the preseason, but contracted Mononucleosis, and has tumbled down draft boards as a result. Mono is a tricky illness, in that it can often take months to regain full physical strength despite not showing any symptoms, so I completely discount his struggles this season. If Kostin or Liljegren is available at 18, and Boston passes on them, my Twitter account may explode. You have been warned.