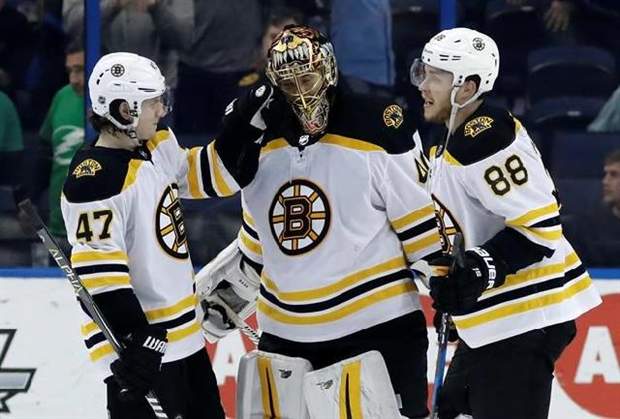 David Backes was hurt last game after taking a skate to the thigh and will be out for some time. Newly signed Ryan Donato comes into the lineup for his first career NHL game. He was supposed to be on the third line, but since Rick Nash didn’t take warmups due to an upper-body injury, Donato will fill in his spot tonight. Korpisalo and Rask will get the starts in nets tonight, Rask is coming off of a shutout down south in Tampa.

Ryan Donato has been one of the most talked about Bruins prospect since he was drafted in 2014, and tonight he gets a shot at playing with David Krejci. Once again, injuries will play a big part of this game with Backes and Rick Nash coming out of the lineup from last game both due to injuries.

Ryan Donato kicked off the game after he shot off down the left wing and battled for the puck, getting the first shot on net of the game. But just as Boston started to look like they were going to start to control the pace, The Blue Jackets pressured Carlo into turning over the puck that led to a Boone Jenner tip-in goal infront of Rask. Boston had a chance soon after to tie it back up when they went on the power play. Ryan Donato had three incredible chances and with great team puck movement, the Bruins managed to get six total shots on the man advantage, but couldn’t convert. But this did sway the momentum of the game as Boston started to click and get good shots on net. Kevan Miller was called for a “Closing Hand On Puck” penalty and while the Bruins did kill it off, they looked like chickens running around with their heads gone in their own zone. In the final two minutes, The Bruins got another oppertunity on the power play and even though they got some great chances they still couldn’t convert.

Columbus is known as 1st period team, and the Bruins came strong, resulting in an amazing first career goal by Ryan Donato off of a great one-timer. Right after that, the very elite Brad Marchand took the game into his hands as he froze Korpisalo with a deke and roofed a backhand shot to go up 2-1. After some more great chances down low, the Bruins headed back to the power play after another Ian Cole penalty. On this try, they finally converted. Riley Nash slapped home a rebound to put the Bruins up by two, but that wouldn’t hold for long. Less than thirty seconds later, Sonny Milano tipped in a Ryan Murray slap-pass to get it back to a one goal game. That took all the energy right out of the building, and Bosotn would head to the locker room holding a one goal lead.

Kevan Miller made sure that the Blue Jackets knew that he wasn’t planning on slowing down as he started off the period with a great chance that rung off the crossbar and out. Columbus would tie it up again after Thomas Vanek made a great redirection play to get one in. Boston continued to make good standup defensive plays at their own line, stopping Columbus almost every time. But after an icing, Panarin rifled a shot past Rask right off of the faceoff to go up 4-3. But just twenty seconds after that happened, the David Krejci line scored once again to make it 4-4 with Krejci getting the goal from a great pass by Donato. This gave Boston a shot of pure energy that resulted in many chances, like a Ryan Donato breakaway, free pucks infront of the net and hit posts. Rask and Korpisalo both had to come up big in the final few minutes, and because of that we are headed to OT.

The usual OT game winner Brad Marchand broke free with a Krug pass, but couldn’t convert with a Blue Jackets player drapped all over him. Rask came up huge with some great saves at the other end. After some conterversial non-calls, the Bruins let Cam Atkinson sneak in behind them and sniped a shot low glove on Tuukka to continue the Blue Jackets winning streak.

With injuries dropping Bruins players like flies, Donato is exactly the type of player that Boston needs. An effecient player that gives it 110% every shift. Even when people start to come back from IR, I think he’ll find a spot in the lineup.

1st: Ryan Donato – Wow. What a game by a guy who was just signed yesterday. A goal and two assists with six shots is incredible. A great signing so far for the Bruins and will continue to be in the lineup with this kind of play. He could have a great career here in Boston if he plays as hard as he did tonight.

2nd: Brad Marchand – A textbook Brad game where he scored a highight reel goal, had eight shots on net, had an assist and was a monster in OT. If there was, for some odd reason, a chance that you didn’t believe that Marchand was elite, this is one of his many games that tell you different.

3rd: David Krejci – When the Bruins need a clutch goal, he’ll be there. If there’s a second line that needs to be productive and cycle the puck for a full shift, he’ll be there. David Krejci has stepped his game up after what people called a down year last season, and is doing great with this never-ending rotation of wingers he gets played with.

MUP (Most Under-Appreciated Player): Riley Nash – This is the second game in a row where I have Riley Nash as the MUP of the game. This is because he is doing such an incredible job while replacing future Hall of Fame-er Patrice Bergeron on the top line where he plays elite, top notch guys every night. He had 22:09 TOI tonight, along with another goal to add to his ever growing total this year.

Bruins about to get squatters rights in the Columbus zone

KM: "C'mon ref! That's a rule? Krejci did it last week and we scored!"

Ryan Donato finishes out his first period of NHL hockey with four shots on goal.

JUST LOOK AT IT! https://t.co/nfkgbtPbN7

how this period is going pic.twitter.com/F6BRdriDSy

Wednesday, March 21st in St. Louis vs the Blues