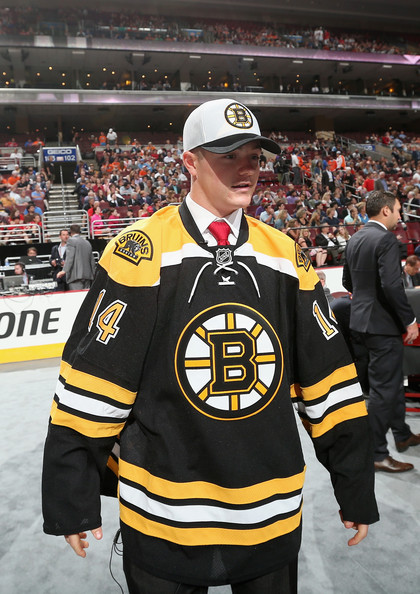 Ryan Donato meets his team after being drafted #56 by the Boston Bruins on Day Two of the 2014 NHL Draft at the Wells Fargo Center on June 28, 2014, in Philadelphia, Pennsylvania.
(June 27, 2014 – Source: Bruce Bennett/Getty Images North America)

This led to the saw debut of Ryan Donato. Donato is a junior at Harvard. Once Harvard was eliminated from the NCAA playoffs,  the 21-year old Donato junior made the decision to waive his fourth year of NCAA eligibility.  (Donato had been drafted in the second round of the 2014 NHL Entry Draft. He was a second-round pick (like Patrice Bergeron and Brad Marchand) and was the 56th pick overall.) He then signed with the Black and Gold the very next day.

This was a big opportunity for the Mass native to showcase some of his skills. By and large, he succeeded. Donato earned his first NHL goal, and his first assist as well.

In the end, Donato ended up with a three-point night and found himself all over the ice. Coach Bruce Cassidy had Donato on the power play and even gave him some ice time during the overtime period.

Current members of the team were certainly pleased with Donato’s debut in Boston. “Ryan played a good game,” said Bruins forward David Krejci on Donato’s first game in the spoked ‘B’.  Donato’s third point of the season came from Krejci’s goal in the middle of the third period. That goal opened the way up for the B’s to take the see-saw game to overtime.  “Good for his confidence to get the first one. That is always the hardest, but he’s got to keep playing the way he played today. I thought he played well and he made some good plays. He easily could have got a couple of more, but that’s a good start for him.”

This was a fantastic debut for the Scituate native.  Even in the loss, Donato was excited to don the spoked ‘B’ and carry on another father-son tradition in Boston. The Donatos are the sixth family in Bruins history to carry on the Black and Gold legacy from father to son.

“I mean, it was fun,” said Donato of his first game for Boston. “Obviously it ended tough, but at the end of the day I was excited and I think it all went well personally, but I’d say it’s still bitter because of the loss.”

Donato’s arrival is certainly a good sign for Boston. Even with some of their best players out of action, the depth of this team is incredible. They’re competitive with other playoff teams and are even capable of shutting out some of the best teams in the NHL. Donato’s strong play once again validates Boston’s “next man up” philosophy.

In the end, Donato and the B’s weren’t able to pull off the win, but they did get that important OT point. This gives the Bruins 99 points for the season. The Black and Gold should find themselves holding onto an automatic playoff spot the next time they earn any kind of point in their next eleven games.