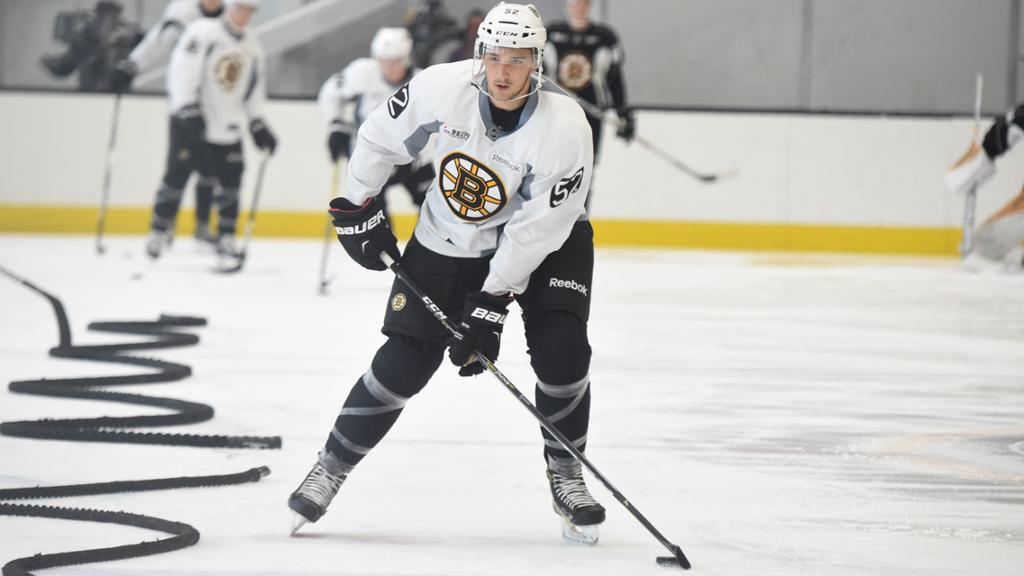 Reports out of the Quebec Major Junior Hockey Leagues Saint John Seas Dogs organization is Boston Bruins prospect and Sea Dogs forward Cedric Pare is heading to the American Hockey League for the remainder of the season. With Saint John’s 2017-18 regular season ending on March 17th, 2018, the 2017 sixth-round selection became available to join the top minor-pro affiliate of the National Hockey Leagues Bruins in the AHL.

Three #SJSeaDogs are heading to the AHL for the remainder of the season.

Pare is a 19-year-old and is ineligible to play in the AHL on a permanent basis per CHL/NHL agreement stating any player under the age of 20 either has to sign a full-time NHL contract or be returned to his Major Junior team. The Pintendre, Quebec native, has yet to sign an Entry-Level contract, so his movement up to the minor-pro level means he will likely not get into any of the 12 remaining regular-season games with Providence or upcoming Calder Cup playoffs.  His level up, for the time being, is likely a move to keep him practicing and staying in shape while being surrounded in a professional atmosphere. If an injury happens to a player on the current Providence Bruins roster, he could be an asset and ready to play, but that remains to be seen of course.

The reason why I’m optimistic on Pare playing in any games with his stay around the Baby B’s is the fact that  2015 first-round selection Zach Senyshyn joined Providence after his commitment to his former OHL’s Ste. Marie Greyhounds was over Zach appeared in zero regular-season games in the Spring of 2017. He did, in fact, get involved in four post-season games in the playoffs with Providence but that was due to an injury to fellow prospect and fellow right-winger Peter Cehlarik and although played decent he didn’t contribute on the stat sheet.

#QMJHL: The rout is on as Daniel Hardie feeds Boston Bruins prospect Cedric Pare for another PPG. Four-point nights for Hardie (3g, 1a), Pare (2g, 2a) and Radim Salda (4a) as Saint John leads Halifax 6-2 late in 3rd. pic.twitter.com/AdwVR4ReWf

The 6′-3″ 205-pound center finished his 2017-18 campaign and second full season in the QMJHL with 13-24-37 totals and career 54 points in 129 games. Playing most of his “Q” career as a bottom-six player, he was forced into a higher role on the team when the Sea Dogs traded Joe Veleno to the Drummondville Voltigeurs for a significant amount of draft picks seemingly setting up for a Saint John’s rebuild. After the Veleno trade in December of 2017, Sea Dogs first-year Head Coach Josh Dixon had confidence and knew what type of leader and player Pare would be with an increased role as a top-six forward and special teams member for the remainder of the season.

#QMJHL: Sea Dogs tie it on the PP as RW Ostap Safin (EDM 4th/2017) and LHD Radim Salda (Ranked No. 39-OA) both thread the needle and LW Cedric Pare (BOS 6th/2017) hammers it home. Joe Veleno doesn’t get an assist but his zone entry made it happen. pic.twitter.com/qEOBsa9zHB

Unfortunately, the Sea Dogs had a disappointing 2017-18 season only posting 14 victories in 68 games ending up in the last position tied with the Shawinigan Cataractes with 39 points. With a boat-load of draft picks coming up for the Sea Dogs and their additions moving forward, the return of Pare to the “Q” and said leadership will be a valued asset to both him as a developing player and Sea Dogs organization who won the President’s Trophy as the best club in the 2016-17 season and a right to represent the QMJHL in the 2017 Memorial Cup  that was held at the WFCU Centre in Windsor, Ontario.

As per source @SJSeaDogs C #NHLBruins 6th round pick @CedricPare12 will likely be joining @AHLBruins at the end of the @QMJHL season. Pare amassed 37 pts (13 G 24 A) in 58 games for #SJSeaDogs Pare is a solid two-way center who can play in any situation pic.twitter.com/2PpIWCL9WQ

The @SJSeaDogs confirm that C Cedric Pare will be joining the Providence Bruins for the remainder of the season. Pare (173rd-overall 2017) had a breakout season this year & doubled his production from last season. Providence adds a versatile, reliable center. #NHLBruins