Bruins Cassidy Should Be In The Running For Jack Adams 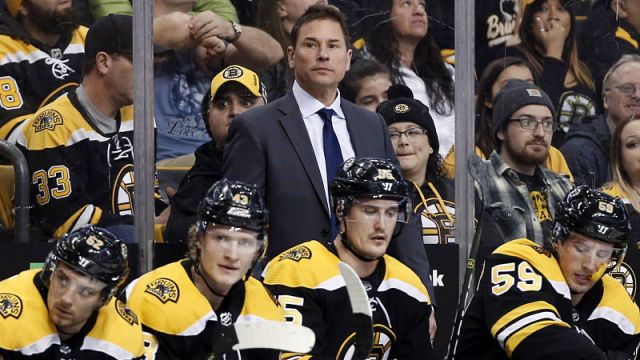 By: Max Mainville | Check me out on Twitter: @tkdmaxbjj

It is fairly safe to say that Boston Bruins’ current head coach, Bruce Cassidy has come a long way to being one of the best coaches in the National Hockey League. We know he is here now, but how exactly did he get here?

The Ottawa, Ontario native was drafted eighteenth overall by the Chicago Blackhawks in the 1983 NHL Entry Draft. However, he could not consistently remain in the league for an extended period of time. Cassidy would play a few games with Chicago, only to be sent down to the IHL, the former NHL affiliate league. Once the 1989-1990 regular season ended, Bruce would no longer dress in an NHL sweater again, as a player at least.

It would be at this time, that Bruce Cassidy would move to Italy, playing with Alleghe HC in the Italy-A league. The current Bruins’ coach would tally 75 points in 36 games in the first year, followed by another 42 points in 25 games in the second year. After a short stint in Germany, and another three-season span in the IHL with the Indianapolis Ice, the playing career of Bruce Cassidy was over.

In the very same season that he ended his playing career at age 31, Cassidy took the head coaching position of the Jacksonville Lizard Kings of the ECHL mid-season from Mike LaZazzera. In his first 50 games behind the bench, Cassidy had a personal record of 15-25-10. Bruce returned to the Lizard Kings for the entire campaign in the 1997/98 season, helping transform his team to a 35-29-6 record, missing the postseason by only three points.

Due to his playing roots in Indianapolis, Cassidy would return to the IHL and coach the Ice to a playoff berth, only to lose in the second round to Detroit Vipers. He would go back to the ECHL, lost in the Finals, then back again to the IHL, which in 2001, became the AHL as we know today.

According to the right people, the coaching job of Bruce Cassidy was NHL-caliber. In his first official NHL coaching job, Bruce Cassidy guided the Washington Capitals to a 39-win season, only to lose to the Tampa Bay Lightning. Unfortunately, his career with the Capitals would not last much longer after the 2002-03 campaign. Instead, he would only coach 25 games for Washington before he was relieved of his duties.

After a brief assistant coach role with the Chicago Blackhawks, it would be back to the OHL for Bruce, this time with the Kington Frontenacs.

Now, finally, his true potential as a head coach began to come through. From 2008-2011, Cassidy was the assistant coach behind Rob Murray for the Boston Bruins’ AHL affiliate team, the Providence Bruins.  It was not until the 2011-12 regular season that he would get the reigns of the P-Bruins.

His first season as head coach of Providence was a lackluster one, only finishing with a 35-34-7 record, good for 77 points, but not quite a good enough record to make the playoffs. Cassidy’s second season showed some drastic improvements, leading the team to fifty wins and the best team in the American Hockey League. Providence would defeat the Hershey Bears in the first round, only to blow a 3-0 series lead to the Wilkes-Barre/Scranton Penguins.

Following the success of the 2012-2013 AHL season, Cassidy’s Baby B’s racked up forty-win seasons for the next three years, losing in either the first or second round.

Meanwhile, the NHL’s Boston Bruins were struggling with the head coach at the time, Claude Julien. The team had missed the postseason for two consecutive years, something they had not done since 2005-06/2006-07, and the team was in obvious need of a change. At this time, Cassidy was brought up from Providence to help coach the Bruins, but only as an assistant role for the beginning portion of the 2016-17 season.

On February 7th, 2017, Cassidy was named Interim Head Coach, after the Bruins fired Claude Julien, who happened to find his way back to the Montreal Canadiens. Bruce would take the team under his wing and lead them to a playoff matchup against the Ottawa Senators, one that they would lose in seven games, but to Bruins fans, just being able to see that Boston logo during the postseason was something to be happy about.

All this backstory now leads us into the current 2017-2018 NHL regular season and how the Boston Bruins have surprised the entire league to become possible Cup favorites.

The first portion of the season was not the best for the club, struggling with injuries to some key players and a starting goaltender who was having trouble finding his game. However, backup goalie Anton Khudobin was able to keep the team afloat during the rough patch with wins when needed the most. It was then that the Bruins became healthy and when the Boston Bruins became a powerhouse.

The Black and Gold cruised to eighteen straight games with at least one point earned, from December 14th to January 31st. Instead of slowing down after the stretch, the Bruins kept up the consistency, something that was lacking in years prior. The wins continued to pile up, along with the individual point totals of the players on the roster.

But once again, Bruce Cassidy is faced with an injury-riddled lineup, with major players such as Patrice Bergeron, Charlie McAvoy, Zdeno Chara, David Backes, Torey Krug, Jake DeBrusk, and Rick Nash. The youth has been called to action, with success. Part of the success with these mini defeats can be attributed to Bruce Cassidy. Constantly shuffling lines, mixing up specialty teams, all while trying to keep already built chemistry. Boston was able to clinch the playoffs for the upcoming 2018 postseason, the second Eastern Conference team to do so, behind the Tampa Bay Lightning. In addition, the B’s have hit the 100-point plateau for the 22nd time in team history, the most among all NHL franchises, and the first time since their President’s Trophy-winning 2013-2014 season.

Add in a 100-point season to the mix for the @NHLBruins.

What a year it's been so far. pic.twitter.com/AVKb7tBGwX

With the impressive position that the Bruins are currently in, Head Coach Cassidy should have his name in the hat for a possible winner of the Jack Adams Award, for the best coach in the National Hockey League. Without question, however, Vegas Golden Knights Head Coach, Gerard Gallant will be one of the three nominees for such an award. Not a single coach in the history of expansion teams has accomplished what he has with the Golden Knights including being one of the top teams in the Western Conference.

Columbus Blue Jackets coach, John Tortorella claimed the award last year after he turned the Blue Jackets into a playoff team. Along with that, the last Bruins coach to win the award, was Claude Julien back in 2008-2009.

In closing, in your opinion, what are your thoughts on having a Bruins coach in the running for the Jack Adams? Do you feel that he could indeed be one of the select few to be nominated by the National Hockey League Broadcasters Association?