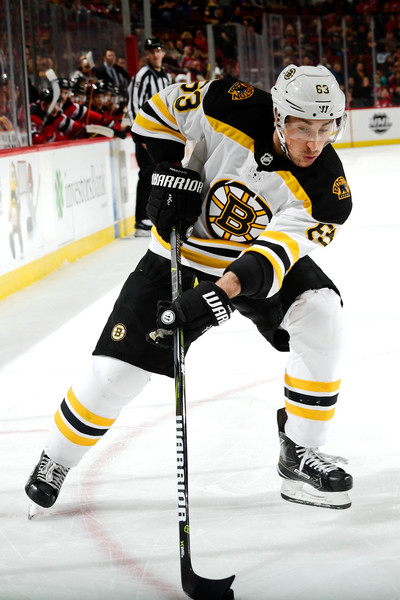 Brad Marchand may be the most polarizing player currently on the Boston Bruins roster. Bruins fans love him. When it comes to other teams, their fan base fans usually complain why a player like him is even allowed in the league.

The reason why Marchand is in the NHL is simple: He’s one of the best players on the ice at the moment. Once again, the 29-year old winger proved his mettle for the Black and Gold. His overtime goal against the Minnesota Wild on Sunday night gave the B’s another two points as they start their final push to end the season atop the Atlantic.

Marchand’s game-winner was his fifth overtime goal this season and the 12th of his career. He’s the fourth player in NHL history to put up five overtime goals in a single season. Only Steven Stamkos (2011-12), Jonathan Toews (2015-16), and Alex Galchenyuk (2016-17) have been able to tally that many overtime goals, and it puts Boston’s Little Ball of Hate (or Great) in with some very elite company.

For all his recent success on the ice (22 points/ 9 goals in the last 13 games), Marchand doesn’t expect things to always go his way. Thankfully, he’s got the skill set to makes things happen for the Bruins.

“You get that confidence a bit, but it all has to go right,” said Marchand on how the Bruins react in overtime situations. “Guys have to make plays and you have to start with the puck a lot of times which we were able to get it back tonight. You need a lot of things to go right, but sometimes you benefit from certain plays, sometimes you don’t.

“This year I’ve played with a lot guys that can make plays and I’ve benefitted from that.”

Bruins bench boss Bruce Cassidy (who should be in serious consideration for the Jack Adams Award) had nothing but positive things to say about the B’s top winger.

“At some point, when he’s out there and you get puck possession, he’ll probably generate something. He’s really been able to finish,” said Cassidy on Marchand’s performance. “Overtime specifically and especially this month, he’s sure come through for us. He’s an elite player. We expect him to get his looks every night because he’s hard on the puck and a competitor.

“Doesn’t surprise me. Again, he was hard on it tonight…their line was very good again tonight.”

His teammates were also not shy on heaping on the praise. “He wants to be the guy, he’s got that edge to him,” said Bruins defenceman Torey Krug of Marchand. “He wins a lot of 50-50 pucks. When you’re 3-on-3 on the ice and he’s winning those battles it’s gonna lead to a chance for your team.

“We expect him to come out on the right side of the puck most of the time and that’s what good players and leaders on our team do.”

If it wasn’t for his suspension earlier in the season, Marchand should have been part of the discussion for this year’s Hart Trophy.

The B’s latest win gives the 104 points for the season. Now their just two points behind the Tampa Bay Lightning with a single game in hand.  The Bruins can easily end up as the best team in the Atlantic by the end of the season.  The B’s are currently enjoying their 22nd 100+ point season and a healthy part of the team’s success has been Brad Marchand.