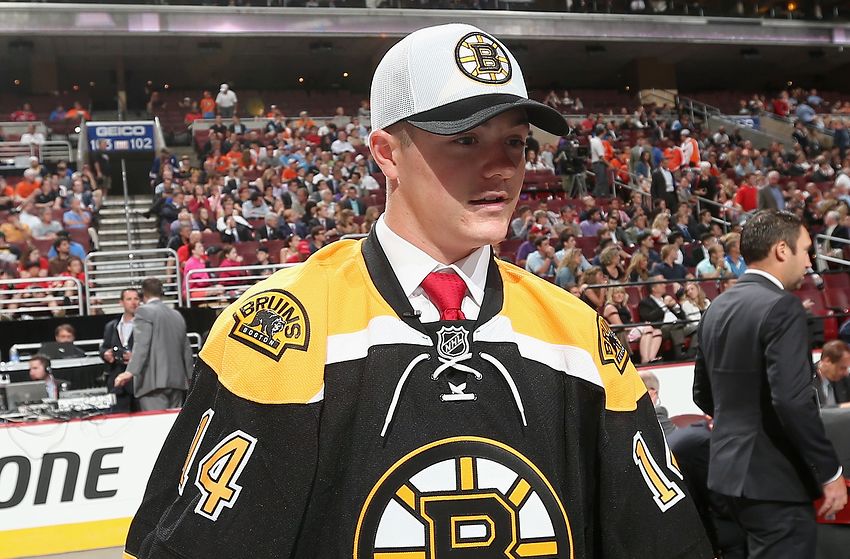 PHILADELPHIA, PA – JUNE 28: Ryan Donato meets his team after being drafted #56 by the Boston Bruins on Day Two of the 2014 NHL Draft at the Wells Fargo Center on June 28, 2014 in Philadelphia, Pennsylvania. (Photo by Bruce Bennett/Getty Images)

The Boston Bruins announced earlier this evening that they’ve signed prospect and Harvard University forward Ryan Donato to an entry-level contract.  This year was a career season for the Crimson Junior as he posted 26-17-43 numbers in in 26 games and was the ECAC Player of The Year and a nominee for the prestigious Hobey Baker Award given to the best NCAA Men’s Ice Hockey Athlete annually. The 21-year-old was also selected to the United State hockey team that played at the 2018 Winter Olympics and played very well with six points in five games (5-1-6).

Donato, a second-round selection of the B’s in 2014 has really taken a huge step in his development over the past year and deservingly generated a great deal of hype from those professional opinions down to the fans that pay close attention to the developing youth on a yearly basis. Although I knew Ryan was going to be signed at some point in 2018, my projection of when was way off as I had him coming to the National Hockey League during the offseason as I believed the Bruins would go with the roster that’s had so much success in 2017-18. Regardless of my projected timeline, I’m very excited to have him with this team and look forward to seeing him when he makes it on the roster with 12 games remaining in the regular season and upcoming playoff schedule.

This is what Ryan had to say shortly after signing his entry-level deal with his beloved Boston Bruins…..

“I am excited to announce that today I have fulfilled a lifelong dream, signing a NHL contract to play for the Boston Bruins,” Donato said in a statement. “While I am beyond thrilled for this next opportunity, it comes with a bittersweet feeling, as my time as a student-athlete at Harvard comes to a close. I am so thankful for every day I have spent at Harvard and the remarkable people I have met along the way, from the classroom, to the ice, and beyond. It has truly been a privilege to wear the Harvard jersey and represent my school alongside such incredible teammates and coaches. My time in the Harvard hockey program has provided me with some of my closest friends and fondest memories, and I will strive to continue representing Harvard well from afar as I enter this next stage of my life.

“While no longer on campus, I am so proud to consider myself a member of the greater Harvard community, and I am still fully dedicated to working towards another lifelong dream of mine: a degree from the university that has given me the best three years of my life.”

Sweeney on Donato (cont.): “He’s a kid that’s got a confidence about himself, a talent level, and he’s got some details he’s gonna have to work on – all young players do. But he’s a player that has hard skill. We’re looking forward to having him…get immersed and get a taste.”

With the current injuries on the Bruins coming down the stretch, this is a solid depth move for the organization with players like David Backes, Patrice Bergeron, and Jake DeBrusk returns up in the air with a dozen games to go before the Mid-April Stanley Cup Playoffs begin, the addition of the young Donato wasn’t exactly shocking. Regardless of how much action he gets into, he has to be a serious candidate at this point to make a full-time NHL player next season as current players that will be unrestricted free agents this summer might not be coming back and creating a permanent spot for him in 2018-19.

By signing this deal & playing for @NHLBruins Ryan Donato will not be eligible to play in AHlL playoffs this season. Whether he plays a lot remains to be seen, but he will get NHL life experience being around the team all the time.

I’ve seen many games that Ryan’s played at the NCAA level and every Bruins development camp that he’s attended and in my opinion, he’s got the skills of an NHL player now, and the pedigree is there with his father and former Crimson coach for the last three seasons Ted Donato who spent several seasons in Black and Gold cannot be denied. The way this kid can skate and stickhandle in traffic is second to none, and he does possess an NHL release. Now his development has brought him to the highest level in the world and can’t wait to see him play NHL opponents shortly as he’s been rumored to get his first taste of the top tomorrow night when the Columbus Blue Jackets come to the TD Garden in Boston. I have to go with a few professional analysts and say I doubt he plays against the Jackets tomorrow night without practicing with the team. Wednesday on the road in St. Louis is a better opportunity in my opinion as he’ll be more acclimated to his new club.