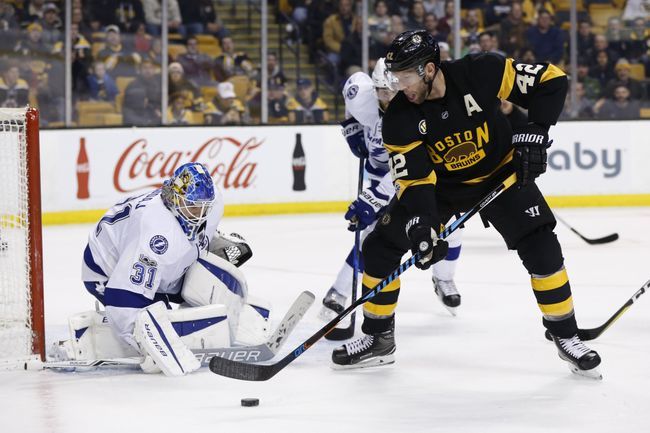 As the Bruins face their toughest opponent yet on this road trip, David Backes slides into the top center position in between Marchand and Pastrnak. Rask and Vasilevskiy take their respective nets as these two titans get set to play a potential playoff matchup.

We'll wrap up the road trip with this lineup. #NHLBruins pic.twitter.com/g6h9kZXI1b

Backes is finally sliding into the 1stC role. The offensive production should be way better than it was last game with a veteran guy like Backes. The 48-86 defensive combo will be nice to see because they have very compatible playing styles.

Tampa started to control the play right off the opening faceoff and would hold the puck in the Bruins zone for a while until the B’s defense started to throw some big hits below the goal line to create some turnovers. Boston was finding success early entering the zone and got some good opportunities early, including the great play from Krug to find the streaking Pastrnak, who would score on a simple forehand-backhand move. Boston continued to shoot from every angle, resulting in lots of rebounds. The Bruins defense played a big part of their offense in the first half of the period with Torey Krug and Nick Holden being the standouts. After Tampa Bay captain Steven Stamkos was called for interference, Boston took little time in scoring their second goal of the game, scored by newly appointed first line center David Backes. Boston continued to get great chances, but couldn’t get the puck in the net. Tampa picked up the pace as they had two great shifts in the Bruins’ end that forced Boston to ice the puck at the end just to catch their breath. David Backes was hurt with less than a minute left in the period. This will be a big loss for Boston if he doesn’t come back.

David Backes was not on the bench when the second period started. Rask was tested quickly but stood strong. Boston had a couple more great chances from using the d-men and tipping pucks, but Vasilevskiy did a good job of staying in place. Brandon Carlo took a tripping penalty. Not something that you want happening against the second best PP team in the league. Rick Nash and Brad Marchand both had incredible offensive chances on the PK, but couldn’t convert. Tuukka Rask continued to make great saves and the physical presence ramped up even more. This game has more of a playoff game feeling than some actual playoff games. Boston would go back on the power play after Brian Gionta was high sticked. This resulted in a Riley Nash goal off of a rebound in front of the net. After a great play to spring a Bruins favoured 3-on-2, Noel Acciari was given a goaltender interference call after failing to stop before crashing into Tampa’s net. The Bruins killed it off after some great saves/blocks, but right after Brandon Carlo took another penalty. Tuukka Rask was all over Tampa Bay’s cross-ice one-timer. He seemed to have been in place for years when receiving the shot. Rick Nash killed off quite a bit of time after he found his way into the Lightning’s zone and held the puck along the boards even though four Tampa players were attacking him. The period would end with David Krejci almost popping in a rebound at the horn.

Tampa controlled the puck off the faceoff and Boston’s defence and netminder needed to be sharp right from the start. Adam McQuaid made a spectacular poke check to keep Tampa away from a great chance and Rask made a save on a completely open net. Boston kept the Lightning out of their end by cycling the puck in the offensive end. Victor Hedman took a high stick penalty and the Bruins headed back on the PP. While they got some decent chances, Boston couldn’t convert. But the B’s held on, and even with the goalie pulled Tampa couldn’t get many good chances. 3-0 the final.

If that isn’t commitment to defense, I don’t know what is. Boston made the best scorers in the league obsolete.

1st:  Tuukka Rask – This was the first time that Tampa was shut out. ALL. YEAR. While he only faced 23 shots, he kept the puck out when needed. Stellar performance.

2nd: Torey Krug – A great game at both ends of the ice for Krug tonight. He had 2 shots, along with assisting on all three goals. He shut down the Tampa offense and was incredible when breaking the puck out.

3rd: Rick Nash – Nash played some of his best hockey in awhile this game. While he did get an assist, his work on the penalty kill was crucial for the Bruins. On multiple occasions, Nash stood up the Tampa defense at their blue line and took the puck away from them. Great defensive game.

MUP (Most Under-Appreciated Player): Riley Nash: After he filled in for Backes on the first line, Nash was great all around. He even scored the third and final goal.

Well that's a good way to start the game

#Bolts first shot on goal comes 9:01 into the game. Attempts have been there but most shots have been wide of the target. #BOSvsTBL

Rick Nash trying to go reverse between the legs to try and beat 3 defenders whilst shorthanded is peak Rick Nash and it's fabulous.

#TBLightning have SEVEN shots on net in 31 minutes vs. #NHLBruins

Man, if you can't score on that you're probably not scoring at all tonight.