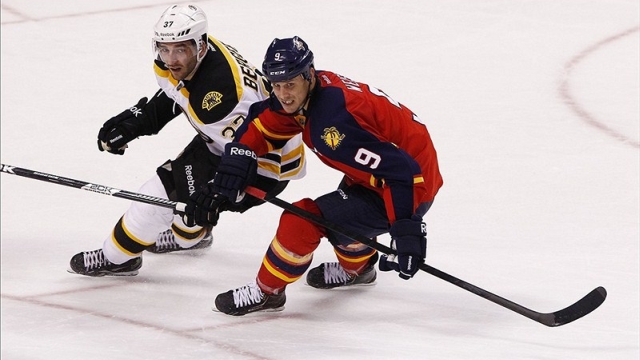 While Boston has been in a playoff spot for quite awhile, the Florida Panthers have just recently gotten into the hunt after going 15-4-1 since the All-Star break. James Reimer takes the net for Florida. The two players called up from Providence (Postma and Blidh) will both sit the game out.

Starters and lineup here in Florida. Torey Krug is in the lineup. #NHLBruins pic.twitter.com/ffdvJZIUlH

It seems like this has been happening every game, but even more key players for Boston are out this game. The list now has Bergeron, DeBrusk, McAvoy, and Chara. Brad Marchand and Tuukka Rask have both been rumored to have been injured within the past five games. It’ll be a scrappy one tonight, as Florida has the most fights in the league this season with 42.

After some funny bounces early on, old friend Frank Vatrano headed to the box after he ran right into Anton Khudobin just a 1:27 into the game. Florida continued to dominate on the penalty kill and was able to kill it off. The offense really started to tick after the fourth line got the puck on net and started to cause some chaos. Even Kevan Miller got into the action when he took the puck and powered into the zone to get a quick shot off. But while the Bruins were creating confusion in the offensive end, the Panthers were able to freely move positions to get Aaron Ekblad in position to smack in an airborne puck. Florida continued to be hard to stop on the entry and converted on a streaking redirection to go up by two. Adam McQuaid was able to get a couple shots on net and a minute later, David Krejci was flying into the Panther’s end with Matt Gryzleck where a flurry of chances occurred until the net came off of its pegs. With just under two minutes to play in the first, David Backes hit Vincent Trocheck, which resulted in a fight and a “Hit From Behind” match penalty to Backes, even though the only part he contacted was the front of Trocheck. But that’s not for me to decide. 2-0 at the end of one.

Florida started on the power play from the Backes penalty, but the Bruins were able to kill it off. After the penalty, Boston struggled with getting effective shots on net. They would get a couple good chances because of good passing, but nothing significant. Rick Nash was penalized for goaltender interference and on the ensuing penalty kill, Vincent Trocheck sniped top left for the third goal against Khudobin. Brad Marchand had some great chances, but couldn’t get the shot off. Bruins couldn’t put anything in the net, and the period would end 3-0.

The Bruins got a chance early on in the period when Keith Yandle took a hooking penalty but once again the Panthers were able to shut down the Bruins power play. Danton Heinen had a great shift controlling the puck and defending it from Florida until he could get the pass off. Boston would head back to the power play after a penalty by Bjugstad but once again James Reimer and the Panthers kept the Bruins from scoring. With a lack of scoring, Bruce Cassidy resorted to pulling the with just less than three minutes left, but this changed nothing and the game would end with Reimer shutting out the B’s. 3-0 the final in Florida.

Pastrnak also played a minute and a half of shorthanded time too, which is interesting

The Bruins sent out a broken down roster to play a team that is on fire recently and lost one of their top players in the first period, which didn’t help. Those two points would have been great for Boston, but right now they are not the team that they actually have. That shouldn’t give a pass to the team to throw in the towel though. With a whole bunch of games against playoff teams coming up, this group of rag-tag misfits will have to figure out a way to win without key players if they want to keep/add on to their current playoff position.

1st: Torey Krug – One of the few Bruins players to have an even +/- on the night, Krug had EIGHT shots on net, the most of any player in the game tonight on either sides. He also led the Bruins in TOI and played through an injury. Good game for him.

2nd: David Krejci – After a game like this, there are very few shining stars. But once David Backes went out of the game, Krejci’s TOI skyrocketed. He also led the power play (Even though it wasn’t effective) and did an ok job defensively.

3rd: Danton Heinen – After being called up to the Krejci/Rick Nash line to replace DeBrusk, Heinen did a fine job of keeping up with the line, and contributing five shots on 15:23 of ice time.

MUP (Most Under-Appreciated Player): Anton Khudobin – Even though he only saved 25 shots, he kept the lead reachable all night. But you have to remember, this is a game without Chara, McAvoy, and Bergeron. Those are the teams’ best defensive players. The goals that did go in were 1. Whacked out of mid-air 2. A 3-on-2 where the D didn’t cover the third guy and 3. A great shot from Trocheck. Overall a decent game.

The only thing missing from that Pele-esque play by Rick Nash was a bicycle kick.

Here’s the Backes hit. Seems similar in a way to McAvoy hit with Trocheck putting himself in bad spot but with Backes just coming back… pic.twitter.com/g8YteA2jIz

Gotta call your own fouls in street ball https://t.co/CObbsqwQ6B

Correct me if I’m wrong, but the Bruins haven’t been shut out since September 30th (only time all season) and of course tonight is when I do a ‘first goal giveaway’. This is on me.

It's time for Bruce Cassidy to put Matt Grzelcyk on the ice and leave him there until he scores the rally-starting goal. Isn't that how this works? #NHLBruins

Just the second time that the #NHLBruins have been shutout this year. Last shutout came in just the second game of the year (A 4-0 loss to the Avs, Semyon Varlamov in goal).

Saturday, March 17th in Tampa vs the Lightning