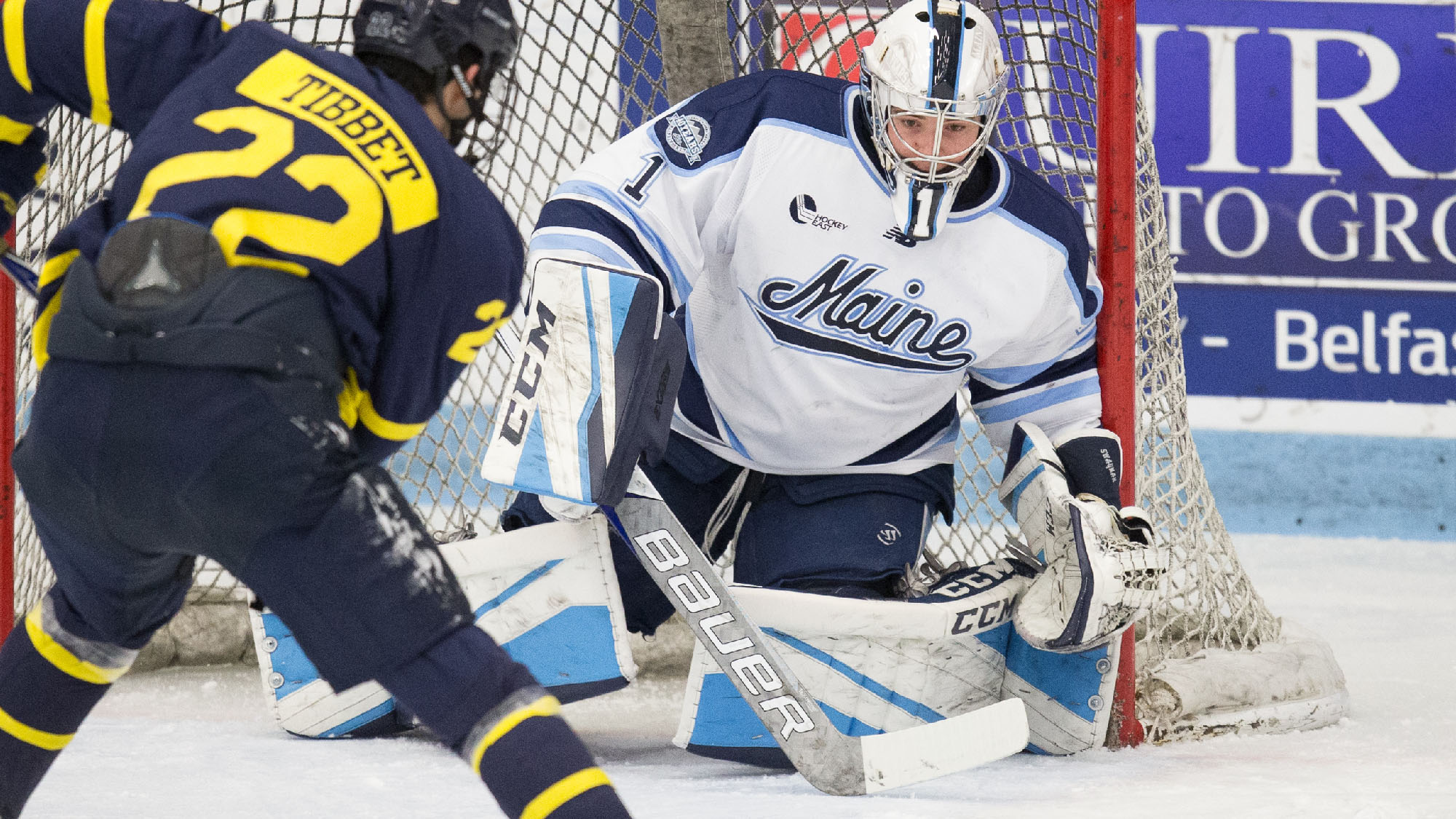 The verdict is in: UMaine Goaltender Jeremy Swayman considers a hot dog a sandwich.

The Boston Bruins’ 4th round selection in 2017 (111th overall) was in Providence this weekend with his teammates from the University of Maine to face-off against the Friars in the Hockey East Quarterfinals. Despite an early lead in Game 1 of the best of 3 series, the Black Bears fell prey to a sneaky comeback from the Providence College squad. In a winner take all game the following night, the Friars took the early lead and nearly ran the Black Bears out of the building and back to Alfond Arena in Orono, Maine with 3 early goals and one waved off due to goaltender interference. The Black Bears surged in the second with 2 goals less than a minute apart, but the comeback would fall short.

.@DonatoRyan and @JeremySwayman picked up some end-of-season hardware this week.

Despite a sour note to end their hopeful season on, the UMaine Men’s Ice Hockey team has plenty of positive takeaways in the 2017-2018 campaign. With an 18-15-4 record, the Black Bears have had their first winning season since 2013-2014 where they went 16-15-4. This season also marks the deepest the Black Bears have gone in the playoffs since 2006-2007.

Fittingly, the Black Bears beat their cross-border rival New Hampshire Wildcats in the opening round of the Hockey East playoffs advancing to their quarterfinal Providence showdown. UMaine snuffed out the UNH Wildcats on back-to-back nights Friday and Saturday of last week by the score of 4-1 and 3-2 respectively.

Unfortunately, this year’s era of good feelings came to an end in the Ocean State.

In football they say “Defense wins championships”; in Hockey, the tender between the pipes can be the difference maker for your season. A hot goalie can carry you, while a cold one can sink you.

Jeremy Swayman knows this; he’s been the key to this year’s UMaine Men’s Ice Hockey season. Despite the losses in Providence, Swayman stopped 37 of 41 shots (0.902 SV%) Friday night, and 38 of 41 shots (0.926 SV%) Saturday night. Considering the jump the Friars came out with both nights, Swayman acquitted himself admirably with the amount of rubber he faced.

The Anchorage, AK native has plenty to be proud of this season: His 16 W’s are the most by any Freshman Maine goaltender since Ben Bishop in 2005-2006. From Dec. 2nd 2017 to Jan. 19th of this year, he had 8 consecutive games of 30+ saves. During the World Junior Championship, he was elected to represent his country in Buffalo with team USA. He has been named NCAA’s “Rookie of the Week” last November, this past January, and the previous week. On Dec. 11th of 2017, he was named NCAA’s “Player of the Week.” Swayman also helped break a multi-game losing streak at Boston University’s Agganis Arena dating back to January 28th, 2012; Not only did Swayman help secure the win, but he also blanked the Terriers for only the 5th shutout in 130 contests between the two clubs.

Bruins Nation was introduced to Swayman on Saturday, June 24th, 2017. When I spoke to him, he recounted the experience fondly. Because of the time difference between the Draft in Chicago, IL, and his home in Anchorage, AK, the news came down around 6 AM local time. “[The call] was pretty surreal…When you get called [in the Draft] let alone to the Bruins, an Original Six team, the great history behind it.” Surrounded by family, the first inkling he was drafted by the Bruins was friends texting him congratulations. “[It was] the best day of my life.”

July is a special month in the offseason for Bruins fans and media, as draft selections and prospects along with invitees attend Bruins Development Camp which is open to the public: a glimpse into the future of the Black and Gold. Jeremy Swayman appreciated the on-ice portions of the 4-day long event, where he was introduced to Bob Essensa, Bruins goalie coach. “He critiqued every little thing he saw” noted Swayman, who was grateful for the attention to detail. “I took it to heart, and still use it in my game today.” Swayman also spoke glowingly of the friendly but competitive environment of Development Camp under the watchful eye of the Bruins brass. He reminisced about hitting it off with fellow prospects Ryan Donato who reached out to him before development camp, Jesse Gabrielle, Trent Frederic, and ex-Bruins prospect Ryan Lindgren (now a New York Rangers prospect). In Development Camp 2018, Swayman said he looks forward to working with the coaches, Bob Essensa especially, in a more one-on-one setting.

Congratulations to #NHLBruins prospects @tfreddy42, @Lindiesal, and @JeremySwayman on capturing the bronze medal with Team USA at #WorldJuniors! 🇺🇸 pic.twitter.com/p9FySvmwPh

Swayman was a UMaine commit before he was drafted, but Development Camp brought him together with a future Maine teammate months before he took to the ice in Orono. Robert “Bub” McGovern was an invite to Bruins Development Camp, where he and Swayman got acquainted before the NCAA season began: “It was a surprise for both of us. When I got the call from a couple of the scouts, [they said] ‘Hey we’re actually bringing your goaltending partner in,’ It was great, I got to start the relationship before the season even started.” Upon arrival in Orono, ME, Swayman worked closely with assistant coach and former UMaine goalie coach Alfie Michaud. “He’s been tremendous. I can’t speak enough about him. He’s really more than a goalie coach, he’s been my mentor, he’s been my role model. If I have any problems, I go straight to him… I know we’re gonna have a great, long relationship together.”

Thanks again @JeremySwayman for making this little guys day, week, and year. 👊🏼 pic.twitter.com/xC3FKLxPOf

Looking toward the future, Swayman is content to let Don Sweeney steer the helm of his development. “It’s absolutely a Sweeney decision. I firmly believe they have the best interests [in mind] for me. If they want me to develop here, I have no problem with that, I absolutely love it at Maine growing as a player and a person as well.”

Time will tell how soon Swayman makes it to Providence or Boston, but in the meantime, the University of Maine – Orono has a rising star in its midst.