Should Bruins Fans Be Worried Headed Into The Postseason? 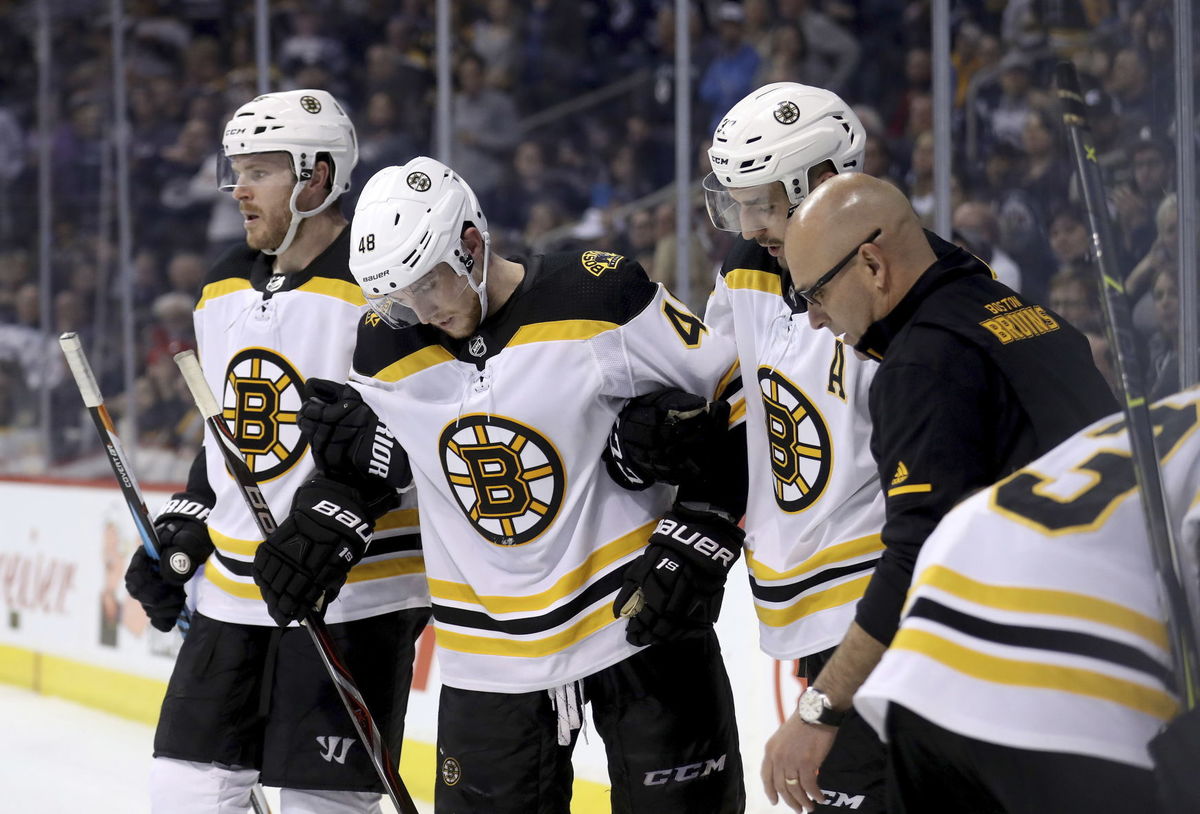 It may sound absolutely ridiculous/manic/borderline insane to even attempt to ask Bruins fans if they are worried about their team headed into the playoffs.

Boston is currently one point out of first place in the Atlantic Division, with one game in hand and with two matchups left against the Tampa Bay Lightning in the last two weeks of the regular season.  The B’s host the Lightning on Thursday night and a victory would vault Boston into first place in the East for the first time this season.

The Bruins have been on an absolute tear since mid-November, transforming themselves from a borderline playoff team to one that is on the short list of viable Stanley Cup contenders.  And although the injury bug has hit them hard in the last few weeks, the B’s are still consistently racking up points, going 2-0-2 on their most recent four-game road trip that ended in a dramatic 5-4 shootout loss on Tuesday night in Winnipeg.

“Great resiliency…we responded and got on the power play, got ourselves back in the game.”

📝Three PPGs in the third helped the B’s to a point on Tuesday night in Winnipeg: https://t.co/XCXKfFhdt1

But that game may have brought to light several concerns with this Bruins team, and while I’m not considering hitting any panic buttons, I think there are things to be worried about as the B’s head to the postseason.

Winnipeg may have found the blueprint to silence the Bruins’ top line.

Boston has one of, if not the best top lines in the entire league, as the trio of Patrice Bergeron, Brad Marchand, and David Pastrnak have been phenomenal and guided the B’s to their spot near the top of the NHL standings.  The Jets employed a unique strategy on Tuesday night, sticking their fourth line of Andrew Copp, Adam Lowry, and Brandon Tanev, and that ploy worked wonders for the home team.  Not only did the Jets neutralize Boston’s top line, the fourth line combined for three goals (all from Tanev) and three assists while stashing a +8 rating (compared to the -8 combined from Bergeron, Marchand, and

Not only did the Jets neutralize Boston’s top line, the fourth line combined for three goals (all from Tanev) and three assists while stashing a +8 rating (compared to the -8 combined from Bergeron, Marchand, and Pastrnak).  Winnipeg was also extremely physical with the top line, with Marchand and specifically Pastrnak on the receiving end of several huge hits.  Those body blows likely cost Boston the game, as Marchand looked a bit sluggish on his late breakaway attempt at the end of overtime.

Physicality (or lack thereof) is a current issue with the Bruins.

I preface this by saying that the lineup that the Bruins are employing currently will likely not be the one that starts the postseason, but there is a lack of big, physical bodies that are willing to exchange blows on the ice for Boston.  The fourth line has no problem being physical, especially in the forecheck, and Kevan Miller is always willing and able to bring the pain along the boards and in open ice.  But without David Backes and Rick Nash, there aren’t many forwards on the current roster that can match up to a physical, big lineup.

The same can be said on defense, as guys like Torey Krug and Matt Grzelcyk just don’t have a big presence at the blue line as Boston would have with a healthy Zdeno Chara and Charlie McAvoy. The league is obviously trending towards speed, and the need to stockpile bruisers is very limited, but these clearly aren’t the Big Bad Bruins that we saw during the last successful run of contention.  Winnipeg is a rare breed, as they are full of large but extremely talented bodies, but opponents could look to play a more physical and rugged style of hockey to disrupt Boston during the postseason.

Are we 100% certain Boston will be totally healthy once the playoffs begin?

The B’s have been slowly regaining their health with less than two weeks left in the regular season, as both Bergeron and Krug recently returned to the lineup while Backes, Chara, McAvoy, and Jake DeBrusk are all inching closer to action.  But there is little to no news on the health of Rick Nash, and there is growing concern that the veteran may not return unless the B’s make a deep and lengthy run in the playoffs.  Boston’s depth is a strong suit, as even without Rick Nash in the lineup, coach Bruce Cassidy will still have some extremely difficult decisions on who should start and who should sit.  But even though the B’s have gotten tremendous production from DeBrusk, Danton Heinen, and more recently from Ryan Donato, there would be a hole in their lineup if Nash could not return.

“I do believe Zee, Charlie, and DeBrusk will join us. I can only speculate is it this weekend? Thursday is maybe. But probably by the weekend we hope.”

🎥 Bruce Cassidy on the B’s injuries and the recent play of Brad Marchand and Tuukka Rask: pic.twitter.com/rBXx0naIq2

As previously mentioned, Nash’s big body can affect games on both ends, and he was quickly developing some impressive chemistry with Krejci and DeBrusk on the second line.  Nash also brought a different look to Boston’s power play, and while Donato has taken over as the person screening at the front of the net on the first PP unit, there is a large difference between seeing past Donato’s slender frame and Nash’s wide physique.  Boston may also be without Grzelcyk, who is being evaluated after being hit up high by Josh Morrissey at the end of the second period on Tuesday.  Grzelcyk has proved all season long that he deserves a spot on the playoff roster, and losing him for any period of time would be a blow even though Boston will likely get Chara and McAvoy back before the season ends.  All hands need to be on board for Boston to succeed in the postseason.

Boston cannot afford to have lapses in production or be dominated like they were in the second period.

No team can and should be expected to play great, consistent hockey from start to finish in every game, but Boston has been totally outplayed for long stretches of games, which leads to the need for more and more outrageous comebacks.  Winnipeg dominated play for most of the first and second periods, with the B’s fortunate to be tied at 1-1 after 20 minutes, and lucky to trail by just two after a mostly atrocious second period.  Boston cannot rest on their laurels and think that their unlikely success when both allowing the first goal of the game and trailing entering the third period will just continue once the playoffs start.

They can’t afford to need stellar goaltending to stay in a game, and they can’t spend entire shifts of even strength hockey defending in their own zone like they did against the Jets.  Playing with fire in the regular season, knowing that there will be another game to play, is one thing, but doing that in the playoffs when every goal matters is another thing.  Every player on Boston’s roster needs to bring their max effort from start to finish in the postseason, or else they will have yet another quick exit from the playoffs.

Goaltending is key to playoff success, and it hasn’t been as sharp recently.

The Stanley Cup playoffs are by far the most unpredictable postseason in sports, and success regularly comes to the teams that have the hottest goaltender.  Tuukka Rask is in the midst of a fantastic season, as he turned a poor 3-8-2 start into a terrific 32-11-5 record, but as of late his play has dipped.  That dip should be expected since Rask did go nearly 2.5 months without losing a game in regulation, but it is still a concern headed into the postseason.  Rask has allowed four or more goals in six of his last 12 starts, and just three times total in his previous 37 starts.  Rask is 8-0-1 in his last nine starts and has had three quality starts in his last four outings (including a huge shutout win over the Lightning on March 17).

His postseason numbers are very strong, with a career 2.12 GAA in 53 starts, so hopefully, this latest stretch is just a brief bump in the road, but Rask will have to revert back to the dominant force that he was in December and January for the B’s to hoist another Cup.  Anton Khudobin has been solid all season long, but he has also been sketchy as of late, with 17 goals allowed in his last five starts (1-2-2).  Let’s be honest, if Boston needs to use Khudobin in the playoffs, then they are in deep trouble.  No offense to Dooby, but he’s a backup goalie, and Boston needs their starter to be fantastic in order to succeed.