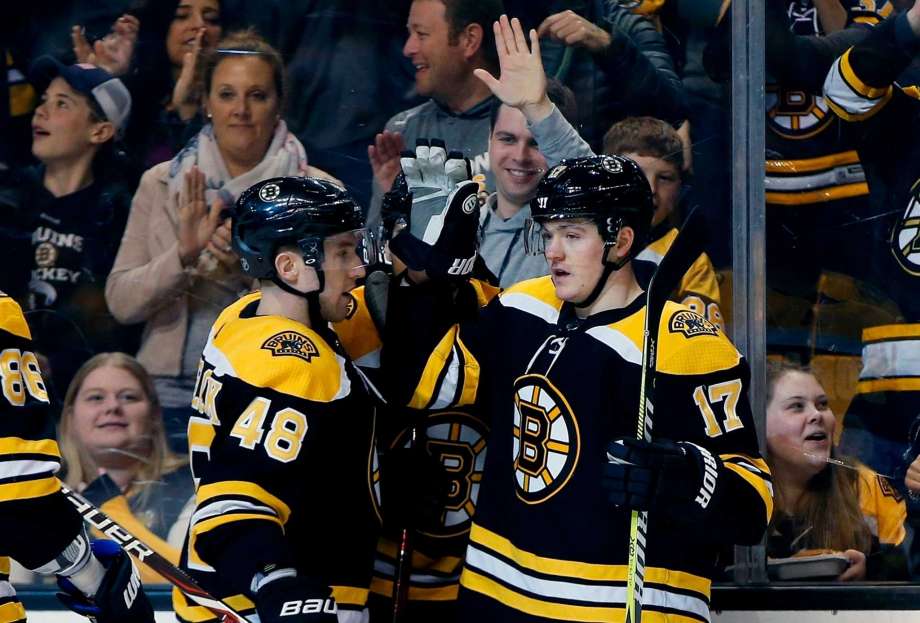 Back in late September, I made predictions (Here’s the link) about who would be the leaders for the Bruins in different stats categories. I also did a mid-season check-in (Link here) halfway through the season. Now that the regular season is over, it seems like it’d be a great time to look back at the season that was and see what predictions I hit, and which ones I missed by a mile. Halfway through I had 6 of 14 categories right.

All stats from NHL.com

This one is kind of surprising. Marchand is known as the Bruins top pure goal scorer, but David Pastrnak really stepped up this season. It also helps that Pastrnak played the full 82 games (Tim Schaller was the only other Bruin to do so) while Marchand played 14 less with 68. I do believe that if Marchand had played all 82, he could have hit the 40 goal threshold, but that wasn’t the case.

Krug was close with 45, but that wasn’t enough to top Marchand’s 51. While Krug did play an important part of the Bruins offense, Marchand’s role was bigger. Brad actually had more assists this year with fewer games played than last year (46 in 80 in the 2016-17 season) so it was a big offensive year for Marchand.

With Marchand’s incredible offensive production this season, this is no surprise. A lot of points usually mean a lot of pluses to your +/- rating. Simple math.

Miller is one of the most physical players on the team. His physical presence is his best defensive tool, which he uses to turn plays into offensive opportunities. Backes missed considerable time because of the colon surgery and leg injury that he had during the season.

This is probably the one that I expected the most. Bergeron is a wizard in the faceoff dot and has made a career of winning important draws. While he was hurt and practicing with Providence, the young players there all gathered around him to learn from the master. (Ryan Donato had a 75% on 12/16 draws, but I didn’t count that as a full season of playing center)

Pastrnak has become a staple on the Bruins first power-play unit. He has been the Bruins one-timer guy on his off wing at the top of the faceoff circle all year. He isn’t like Ovechkin yet and I’m not sure he ever will be, but he has the makings of becoming a very dangerous and consistent part of the Bruins special teams.

Time On Ice Per Game Played

This came as a bit of a surprise after Chara’s season last year, as it looked like he was going to be slowing down and taking fewer minutes. But this season has shown just how well his body is holding up. It’s also no surprise to the people who have read the Sports Illustrated feature on him that claims that he once asked the Ottawa Senators coaching staff to play the full 60 minutes in a game. I personally think he could have back then.

One goal behind Pastrnak and a six-assist lead over Krug for a five-point total lead of 85 points. Marchand is elite. End of story.

Pastrnak is almost always on the ice during power plays. This resulted in all of his goals, and his ability to rotate the puck down low and across the ice led to lots of points off of assists.

Marchand is known as a clutch player, and this stat directly helps that argument. Wheather it was from all of his OT goals or good timing, Marchand got the job done when needed.

My original prediction was WAY off. Boston had six overtime goals, and the only other player to score was Charlie McAvoy. We saw Marchand single-handedly take over games in OT, mainly due to his ability to transition and pivot incredibly well while controlling the puck which is a great type of way to play in 3-on-3. Puck control in overtime is key.

This result was pretty much due to injury. Pastrnak played all 82, but Bergeron only played in 64. Bergeron is known as someone who takes good shots and hits the net. Pastrnak is known as a full-throttle shooter, so it isn’t unexpected that he’d lead the team. The Marchand/Bergeron/Pastrnak line had a total of 652 shots this season and were all in the top four in shots for the Bruins (Krug is the only other with 197)

This is pretty easy to break down. Miller had four fights, while Marchand didn’t have any. While Marchand did have a pretty high total, the second most at 63 PIMs, he stayed away from the big numbers, which kept the total low. The way that Miller plays usually leads to lots of penalties, so it’s understandable that he leads the team in PIM’s.

Tim Schaller showed us all just how valuable he is on the PK this season. He was regularly asked to play hard minutes and came up clutch. I definitely overestimated the number of points that the Bruins would get.

That just goes to show you how different a season can make. Injuries, replacements and the emergence of different stars. Or I’m just not that great at predictions. Maybe it’s a little of both. Oh well, onto the playoffs.