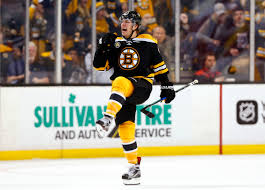 David Backes started the game with a physical shift as the Bruins looked ready to go right from the start. Seemingly every Bruin finished their check in the opening minutes as they looked to set the tone. The Bruins went to the powerplay with 14:56 to go in the period as Rick Nash drew a hooking penalty on James Van Riemsdyk.

Brad Marchand wasted no time as he scored 24 seconds into the man advantage, taking a great feed from Torey Krug. David Pastrnak picked up a secondary assist on the goal.

Brad Marchand gets the party started in Boston! 🚨 pic.twitter.com/Q3YLf4TbcO

David Krejci then went off for a hook just 26 seconds after the Marchand goal as the Maple Leafs looked to answer. The Bruins killed off the penalty, getting a few shorthanded chances in the process. Tyler Bozak and Charlie McAvoy got tangled up behind the Bruin goal leading to a small scrum that involved Backes taking down Van Riemsdyk. The Bruins did a good job in the first frame of not giving the Leafs time and space in the offensive zone. Jake Gardiner nearly tied the game with a long-distance slapper but the shot rang the iron. The Leafs finally found their legs as Zach Hyman scored with a tremendous burst of speed to tie game with just 3:08 to play in the period.

Just 59 seconds into the period, Zdeno Chara went to the box for a holding the stick penalty. The Bruins killed it off as Tuukka Rask made a couple of key saves to keep the game tied.

The Bruins answered the Leafs strong start to the period with a couple of good shifts by the first and second lines. The Leafs went to the powerplay yet again as Danton Heinen went off for slashing with 13:11 remaining in the period.

The Bruins killed the penalty as the Leafs struggled to hit the net despite numerous chances. Neither team found good chances in the middle parts of the period as the intensity ramped up exponentially.

The Bruins went to the man advantage as Patrick Marleau got hit with a hooking call with about six minutes left in the period. Backes found the back of the net on a net mouth scramble with just 16 seconds left on the penalty to give the Bruins the lead once again.

A strong shift to close the period by the first line resulted in a goal for Pastrnak off a sweet feed from Marchand to make it a two-goal Bruins lead with just 38 seconds to go.

PASTA🍝🍝🍝 David Pastrnak with the absolute snipe to put the B’s up 3-1 at the end of the 2nd! #NHLBruins pic.twitter.com/Ss5eudfBEz

The Leafs took a too many men on the ice penalty about two minutes into the period as the red-hot Bruin powerplay went to work for the third time in the game. The Leafs killed off the penalty as the Bruins failed to get any great scoring opportunities. Soon after the penalty, Nazem Kadri hit Tommy Wingels from behind as the Bruins went to the man advantage again.

Here’s the 1st Kadri hit on Wingels which led to Kadri yapping at the refs and smashing his stick in the box. In this context the 2nd one is even worse. He’s clearly targeting Wingels after the first hit. Doesn’t get more obvious that he was making the hit with an intent to hurt. pic.twitter.com/Mp9zxIuzUn

The Leafs killed off the penalty as the Bruins again couldn’t get any great chances and the game remained just a two-goal margin. Sean Kuraly finished off a rush to the net by Pastrnak, batting the puck out of mid-air to give the Bruins a three-goal lead with 12:19 to play.

Sean Kuraly scores to put the Bruins up 4-1 pic.twitter.com/flyGzlCB88

Kadri went to the box again after a cheap shot on Tommy Wingels. Kadri got a match penalty for the hit and the Bruins went on a five minute major powerplay. Krejci banked a pass into the net off of Frederick Anderson to extend to lead to four with 8:31 to go.

David Krejci scored from behind the net. The Playoff Phenom strikes again. 5-1

The Leafs killed off the remainder of the penalty with the Bruins only scoring once.

Pastrnak took a puck up high with about three minutes to go and immediately skated toward the bench, being assisted by Marchand and Bergeron.