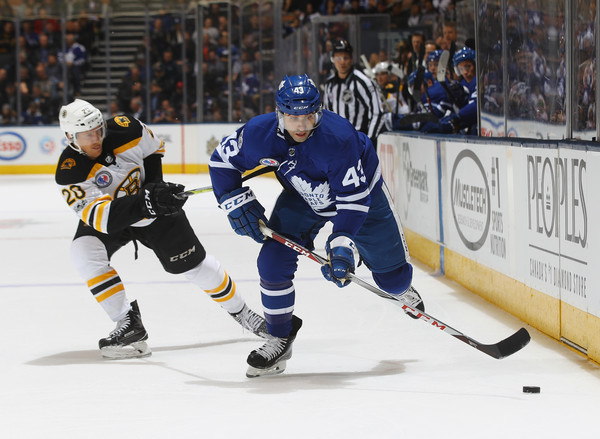 The Stanley Cup Playoffs are some of the most intense two months you’ll see in all of the professional sports. Sixteen teams battle in four rounds of hockey. They all have one goal in mind. To bring the Stanley Cup home.

Hockey is a passionate sport. Sometimes players will go out there and do stupid things. As a member of the Boston Bruins fan base, many of us have had to defend the actions of our players during past playoffs.

Let’s face it, defending Brad Marchand can be a full-time job for many fans of the Black and Gold.  Marchand going ‘Fifty Shades of Bruin’ on Leo Komarov will certainly be generating some anti-rat buzz for Boston’s ‘Little Ball of Hate’ tomorrow.

I won’t be surprised at all if the home office in Toronto throws some kind of fine at him.

But for all of Marchand’s antics Thursday evening, Leafs forward Nazem Kadri’s dangerous play takes the cake.  Kadri made two separate hits on Bruins forward Tommy Wingels in the game.  He was penalized for both hits and was given a game misconduct for the second one.

Toronto’s Nazem Kadri will have a hearing Friday for boarding/charging Boston’s Tommy Wingels.

Kadri will almost certainly be suspended for the hit. The Leafs will be down one of their best players, and Kadri could easily find himself watching the rest of the series from the ninth level.

Here’s the 1st Kadri hit on Wingels which led to Kadri yapping at the refs and smashing his stick in the box. In this context the 2nd one is even worse. He’s clearly targeting Wingels after the first hit. Doesn’t get more obvious that he was making the hit with an intent to hurt. pic.twitter.com/Mp9zxIuzUn

“Sure hope Marchand doesn’t do anything dumb”

Kadri: “Someone say do something dumb?!?” pic.twitter.com/PbVxUGOpQF

This is what Kadri had to say in his defense of the (second) hit on Wingels.

“Well, initially I just thought (Wingels) made contact with (Mitch Marner’s) head to start,” said Kadri postgame, “and I didn’t see a call there. He was turning up the wall, so I was coming into the hit, and then he ended up falling. It happened pretty quick, and I think he was reaching for the puck. I haven’t really watched it yet, but I don’t think I stuck my leg out or my arm out. or whatever the case is, but it’s in the NHL’s hands at this point.”

Kadri (like Marchand) is considered a repeat offender. He has been suspended three times in his career.  He (like Marchand) has been fined in the past for various violations of league rules. The Department of Player Safety will (or at least should) take his past transgressions into account when the penalize him.

This looks like it should be a two or three-game suspension. Personally, I’d rather see three. It was a dangerous hit, and it wasn’t Kadri’s only attempt to injure another hockey player. One stupid hit in a game is being like Brad Marchand. Two or more and you start looking like Matt Cooke.

Hopefully, the Department of Player Safety gets this one right. Fingers crossed, but the DoPS have let us all down before.