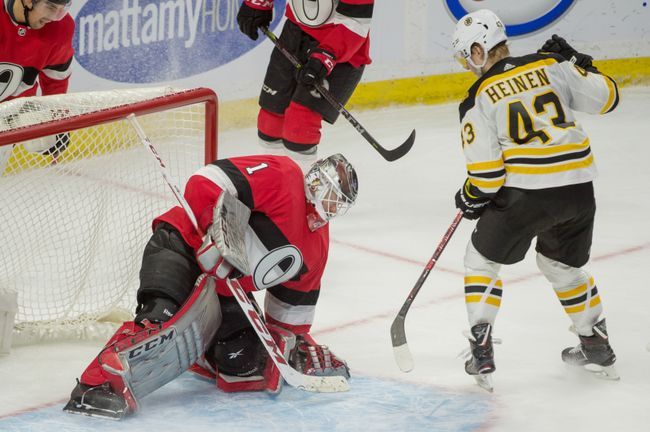 Kicking off Saturday night with these guys. #NHLBruins pic.twitter.com/5B4xsa1MQO

After a deep playoff run last spring, the Ottawa Senators are looking towards the draft lottery after a disappointing season, while Boston has its sights set on the next few weeks. The depleted Ottawa defense and goaltending will have their hands full with this Bruins lineup who will be hungry to get two points tonight. Danny Taylor gets the call tonight in his first appearance with the Sens, while Anton Khudobin is in nets for Boston.

Tonight’s game gives Boston another chance at sweeping the season series of yet another Atlantic division team, the first being Montreal. But more importantly, this game gives them an opportunity to get the top spot in the Eastern Conference. While Boston has already clinched a playoff spot, there is still the question of seeding and who they will play in the first round of the playoffs. And with Tampa also playing tonight, we’ll have a better look at what it’ll be like after tonight. It should be a shooting gallery tonight since Ottawa always gives up a lot of shots and Taylor hasn’t played in the NHL since the 2013 season.

After a somber opening with a touching tribute to the Humboldt Broncos hockey organization, the game got underway. Boston came out hard and got some good zone time to start off the game, but couldn’t convert early. The Bruins were given a power play after a pretty weak call on Zack Smith and only got one shot on net during the two-minute advantage. The Sens struck first after Boston had some bad defensive play inside their own blueline. Ottawa continued to get good chances with their speed. The game started to get more physical around the five-minute mark. The teams headed to the dressing rooms with Ottawa leading by one. Boston was getting chances throughout the opening period but just couldn’t get anything solid going.

Boston came out of the intermission on a mission. While only minutes into the period, the Bruins looked like a team trying to force OT late in the game. Desperation plays at the offensive bluelines and pile-ups in front of the net. The Bruins also played well on the penalty kill. After a dangerous hit by Mark Borowiecki on Jake DeBrusk, the Bruins headed to the power play which didn’t last long. Pastrnak scored less than ten seconds after the puck was dropped to kick off the power play after a great cross-ice pass. Right after the game-tying goal, the Bruins were right back at it in Ottawa’s end. The line of Schaller, Acciari, and Wingels were buzzing around the zone, hitting anything that moved. This resulted in a turnover where Tommy Wingels walked into the slot and wired a shot that bounced around after the initial contact and was eventually knocked into the net by Taylor himself. 2-1 Boston. After some good defensive play, the Bruins sent the puck out of their own end to their blueline where Thomas Chabot was waiting for the puck, but it bounced through his feet which led to a two-on-one which ended with Danton Heinen picking the far corner with his great shot. 3-1 Boston at the end of two.

Bobby Ryan started off the period by running Anton Khudobin over, but no penalty was necessary because it wasn’t called a goal. Boston continued to get chances, but Taylor was solid the first five minutes. Ottawa clawed their way back into the game after Ryan Dzingel walked around Anton Khudobin and tucked it in to close the gap to one goal. Backes was called for a trip with 7:22 left to play, but this would be uneventful. Noel Acciari would seal the game with a great breakaway move that went five-hole on Taylor. Backes would add an empty-netter to end the game at 5-2.

Corsica released their hockey WAR metric. Here's the B's. The defensive component has Grz ranked 11th of 217 defenders and Chara only 70th. Can't wrap my brain around that one. pic.twitter.com/af9OdhIix5

With most of the Bruins defense finally healthy, it’ll be hard to say which one will be the odd man out this playoff season. While the Bruins brass may not be looking too far into these stats, you have to think that it’ll be a difficult decision when it comes down to it.

1st: Anton Khudobin – Without the play of Khudobin, the Bruins wouldn’t have been in this too long. Only needing to face 28 shots tonight, Khudobin came up big on power plays and was stellar in the final minutes when the Sens brought the heat.

2nd: Patrice Bergeron – Bergeron was great as usual tonight. He drew a penalty and had three shots on net with a 60% win percentage in the faceoff dot. He was also credited with two takeaways and assisted on the Bruins first goal. He may not have been on the scoresheet too much, but he played a great game defensivly and creating oppertunites in the offensive zone.

3rd: Danton Heinen – The only Bruins player to get two points tonight, including the game-winner and an assist on the empty net goal. A great game for the rookie tonight, or as captain Zdeno Chara wants them to be called, first-year player Danton Heinen.

MUP (Most Under-Appreciated Player): The Forth Line – I couldn’t decide who was the stand out on this line tonight. They all battled and mucked up the corners every shift. It’s great to see Tommy Wingels fit in so well with this line with Sean Kuraly out of the lineup.

It will never not blow my mind that this Senators team was a game away from the Stanley Cup Final last year.

Hurricanes doing everything they can to help the Bruins tonight. As I have always said, Raleigh is the greatest city in America.

#NHLBruins are 2nd best team in East but somehow have allowed the first goal 43 out of 81 times this season.

Strong bumper presence by Patrice Bergeron. Pulls Tom Pyatt toward him, which opens up the seam for David Pastrnak.

Hurricanes win. Bruins can officially get No. 1 seed with win Sunday night against Panthers.