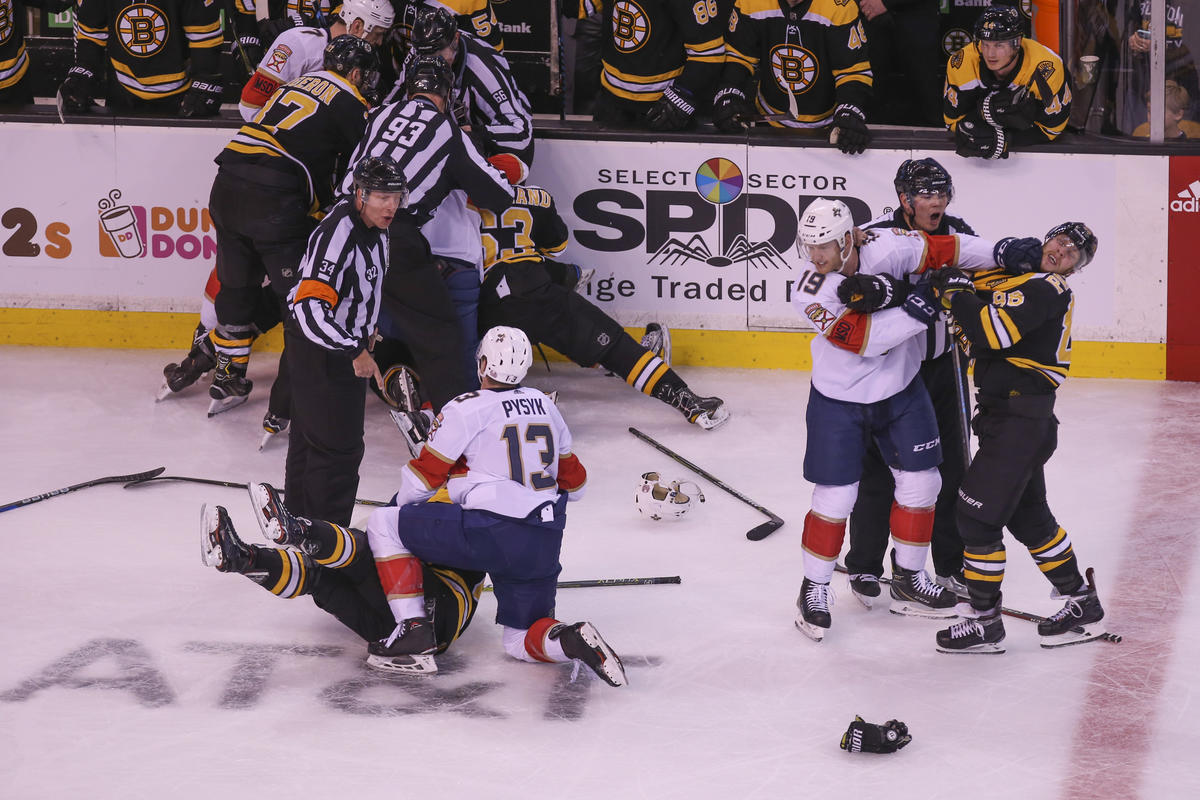 Here's how we'll line it up for Game 82. #NHLBruins pic.twitter.com/gb2LkLrtRG

Tonight marks the last game of the NHL regular season and a celebration of the great career by Garden legend, Rene Rancourt, who has 42 years of singing with the Bruins to his name. Boston’s lines were shuffled a little from yesterday’s game, but aren’t too different from usual. Rask and Reimer take the nets.

Boston should come out strong tonight since they need this win if they want home ice throughout the playoffs. Do or die.

After a heart-warming opening ceremony in honor of Rene Rancourt which included a ceremonial puck-drop, the game got underway in a hurry. McAvoy threw a couple heavy hits early on and made sure that his presence was made. After a quick, hard-hitting first shift, the Bruins gave up a weak goal to Henrik Borgstrom that fluttered in over Rask’s glove and in. After some nonchalant back and forth, Chara took a penalty by tying up the legs of a Florida player with his stick. But on the ensuing man-advantage, Tuukka Rask and the rest of the penalty killers made sure that they wouldn’t go down by two goals early on and made the successful kill. After the PK, the Bruins were able to get some solid zone time, which ended up with shots on net and the eventual one that would pop out so David Backes could reach it and send it into the back of the net to tie the game. Boston would get a chance on the power play, but the Bruins didn’t get anything going. Former Bruin Frank Vatrano struck again against his former team for his second point of the night. Overall, Boston seemed sluggish and passive, instead of the powerhouse team that we’ve seen in the past. They need to bring the power and attack in the next two periods if they want to get those last two points and win the East.

Patrice Bergeron was able to set a play before the puck drop to start the second period, and it worked decently for the Bruins. They got the puck at the net but weren’t able to keep it in Florida’s zone. Boston started to show better puck movement with the fourth line, but Reimer kept their attempts out. Just over five minutes into the second period, Brad Marchand made a great defensive play to keep the puck in the zone, which gave David Pastrnak a great opportunity to take a shot on net which resulted in a penalty against Vincent Trocheck for slashing. While the Bruins would end up getting some decent shots and chances, Reimer stayed solid and didn’t let anything in. The momentum of the game started to change in favor of the Bruins following that power play. But as soon as it felt like Boston was starting to put the pressure on the Panthers, Maxim Mamin scored after some great cross-ice passing by Florida. Jake DeBrusk had a great chance at a goal on a breakaway, but couldn’t pot it. Boston definitely showed more life after the late tv timeouts, but no results. Florida holds a 3-1 lead going into the third.

As everyone expected, Boston came out of the locker room with a bit more desperation in their play, throwing anything they can on net early on. Bergeron got a nice chance, followed later by Heinen in the low slot on a bouncing puck. Charlie McAvoy was called on an elbowing penalty that was kind of weak, but understandable. While out there on the PK, Brad Marchand made sure that his presence was known by hitting everyone and forechecking aggressively on the PK. Zdeno Chara took a high stick straight to the bridge of his unprotected nose, which resulted in a bloody nose and a four-minute power play for Boston. After some bad plays, while trying to keep the puck in the offensive zone, Boston passed it around and Bergeron finally found David Pastrnak across the zone for a catch-and-release goal, which came less than two minutes into the four-minute power play, which reset the clock to a two-minute power play. The Bruins actually got more shots and looks on these two minutes and with a few seconds left in the power play, Florida was forced to make a goalie change after James Reimer was in a great deal of discomfort. Roberto Luongo came into a high-pressure game with no warm up after taking his last shots in the pre-game skate. He held his ground through the first couple of shots. After a bouncing puck gave Vincent Trocheck a breakaway in the last five minutes of the third, Rask came up massive and kept the game close with a great save. But just as soon as Boston thought that they were destined to win, Evgeni Dadonov picked up a rebound after being left in front of the net all alone and put it in to expand the lead to 4-2. Boston pulled the net with 1:30 left in the game, but it wouldn’t matter since Boston could not score a goal with Rask out of the net. Next stop, the playoffs.

Exactly what the team has looked like at times during the past two games. The third period was much better, but if they plan on beating the Leafs. With the Bruins lose tonight, they won’t have home ice advantage if they end up playing Tampa Bay, which may be a deciding factor.

1st: David Pastrnak – Scoring a goal tonight, Pastrnak played pretty well. He had lots of opportunities around the net. He had seven shots on net and was always involved in the power plays.

2nd: Patrice Bergeron – Bergeron will always be a star during games, but tonight he really dazzled. He was great defensively as always and controlled the puck in the offensive end. Bergeron is a presence on the ice.

3rd: Tuukka Rask – Even though Rask only made 22 saves, he kept the Bruins in it until the Dadonov goal. He made big stops when needed.

MUP (Most Under-Appreciated Player): Zdeno Chara – After taking that high stick straight to the nose, Chara was out on the power play before the PP was over. His nose hadn’t even stopped dripping with blood. Chara played a hard, physical game.

By the way, Rene Rancourt will continue to sing the anthem through the playoffs, so it's not over yet.

I used to love you, Frank Vatrano

For the second time in as many games against his former team, Frank Vatrano has himself a goal. Panthers take the 2-1 lead.

BREAKING: Brad Marchand has been suspended for four games in response to Charlie McAvoy colliding with a referee. Wow #NHLBruins

Me reading the history of James Reiner vs the Bruins w a multi goal lead pic.twitter.com/zPMgX1iLBo

NO ONE MAKES ME BLEED MY OWN BLOOD pic.twitter.com/n29jcWVA4e

That means:
Maple Leafs vs Bruins
Devils vs Lightning