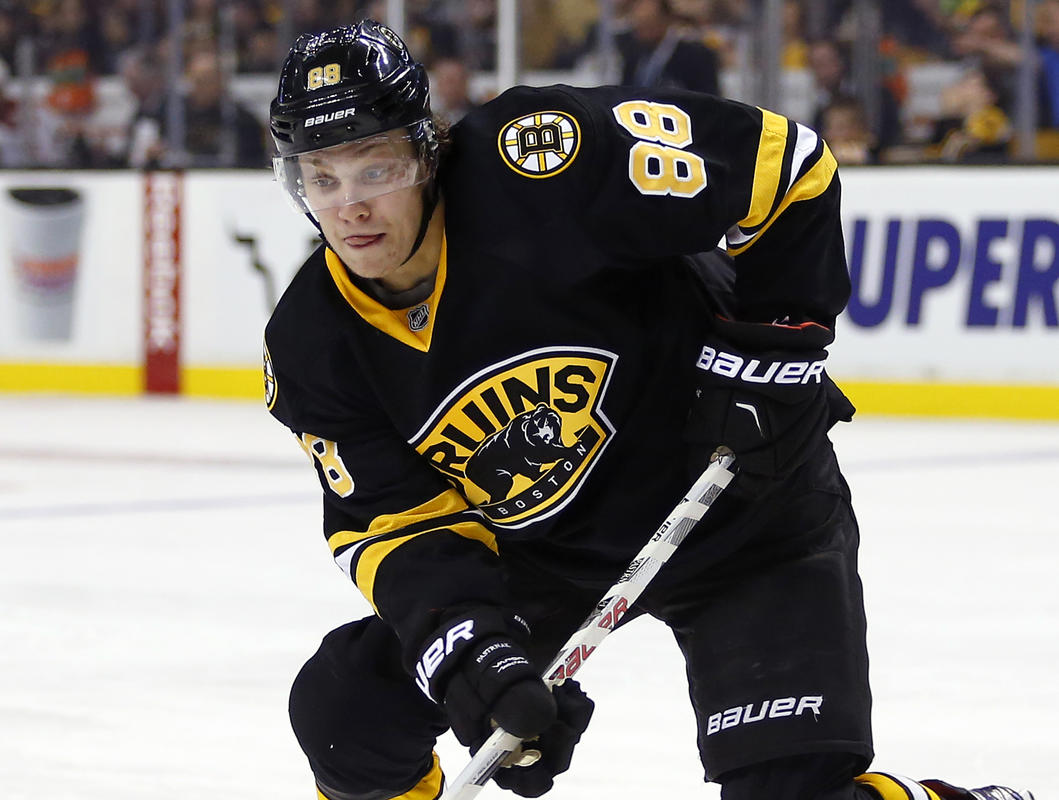 About 90 seconds in, Jake DeBrusk sprung Rick Nash on a breakaway but he missed wide on Frederick Andersen’s stick side. The Leafs came out a bit more aggressive than in Game 1, resulting in some early chances.

The hitting picked up as Kevan Miller took a run at James Van Riemsdyk as the Bruins looked to get physically involved. David Pastrnak cleaned up some garbage in front of the net to pick up his second goal of the playoffs to give the B’s a 1-0 lead with 14:34 remaining in the period.

The Leafs got hit with a too many men on the ice penalty as the Bruin powerplay went to work after a dominant performance in Game 1. Kaspari Kapanen got in alone after a turnover at center ice but hit the post. DeBrusk made it 2-0, tipping home a pass from Torey Krug on the powerplay with 10:14 to go in the period. It was the rookie’s first career playoff goal.

After a tremendous shift, Miller scored as his attempted pass deflected into the net off of Nikita Zaitsev to make it 3-0 with 7:47 left in the period. It was Miller’s first career playoff goal.

After Tim Schaller finished his check on Mitch Marner, Ron Hainsey dropped the gloves as the he tried to get his team going.

Tim Schaller takes a run at Marner, Hainsey didn’t like it. pic.twitter.com/gr0o1jtR2S

The Bruins picked up a powerplay as Hainsey got an extra two minutes for roughing. Nash made it 4-0 after finishing off a rebound in front for the Bruins second powerplay goal of the period with just five minutes remaining in the period.

🚨RICK NASH🚨 The B’s are loading it on! 4-0 Boston! #NHLBruins pic.twitter.com/pZyZzWh1Z8

Marner tallied a goal for the Leafs just 1:22 into the period as Zach Hyman zipped a pass through the crease to the hard-charging Marner.

.@Marner93 gets the @MapleLeafs on the board early in the second. pic.twitter.com/0XnjEhliDA

David Krejci tipped a Pastrnak pass past Curtis McElhinney with 16:14 to go in the period to make it 5-1.

Deflection by David Krejci makes it 5-1 Bruins. Fourth point of the night for Pastrnak pic.twitter.com/KNu4knZ4ky

Just seconds after the goal, Nash went to the box for high sticking as the Leafs looked to score their first powerplay goal of the series. The Bruins killed it off as the Leafs failed to get any offense momentum. Connor Brown fired a pass in front that Tyler Bozak put in to make it 5-2 with 10:58 to go in the period. It was Bozak’s first goal of the series.

Van Riemsdyk went to the penalty box after tripping Brad Marchand as the Bruins went to the powerplay again. The Leafs killed it off despite a few good chances for the Bruins.

The Bruins went to the powerplay yet again as Marner sent a puck over the glass for a delay of game penalty. The Leafs killed it off as the Bruins only put one shot on goal during the man advantage.

The Leafs started to generate some momentum early in the period but Tuukka Rask made some huge stops to keep the game in control. The Bruins would go shorthanded as Matt Grzelcyk took a hooking penalty with about 15 and a half minutes left in the game.

Pastrnak made it two goals on the night as he scored on a wrap around after a incredible stick play by Bergeron to make it 6-2 with just 7:26 left to go.

David Pastrnak roofs it for his 2nd of the game, 6-2 #NHLBruins pic.twitter.com/HHFnLXhcys

With 5:40 to go, Krejci went off for a holding penalty to give Toronto yet another powerplay opportunity. Van Riemsdyk potted a rebound in front just 33 seconds into the man advantage to cut the lead to 6-3.

Pastrnak finished off the hat trick with a marvelous move in front to give the Bruins a 7-3 lead with just 1:36 to go. With the goal, Pastrnak picked up nine points in the first two games of the series, including six in Game 2.