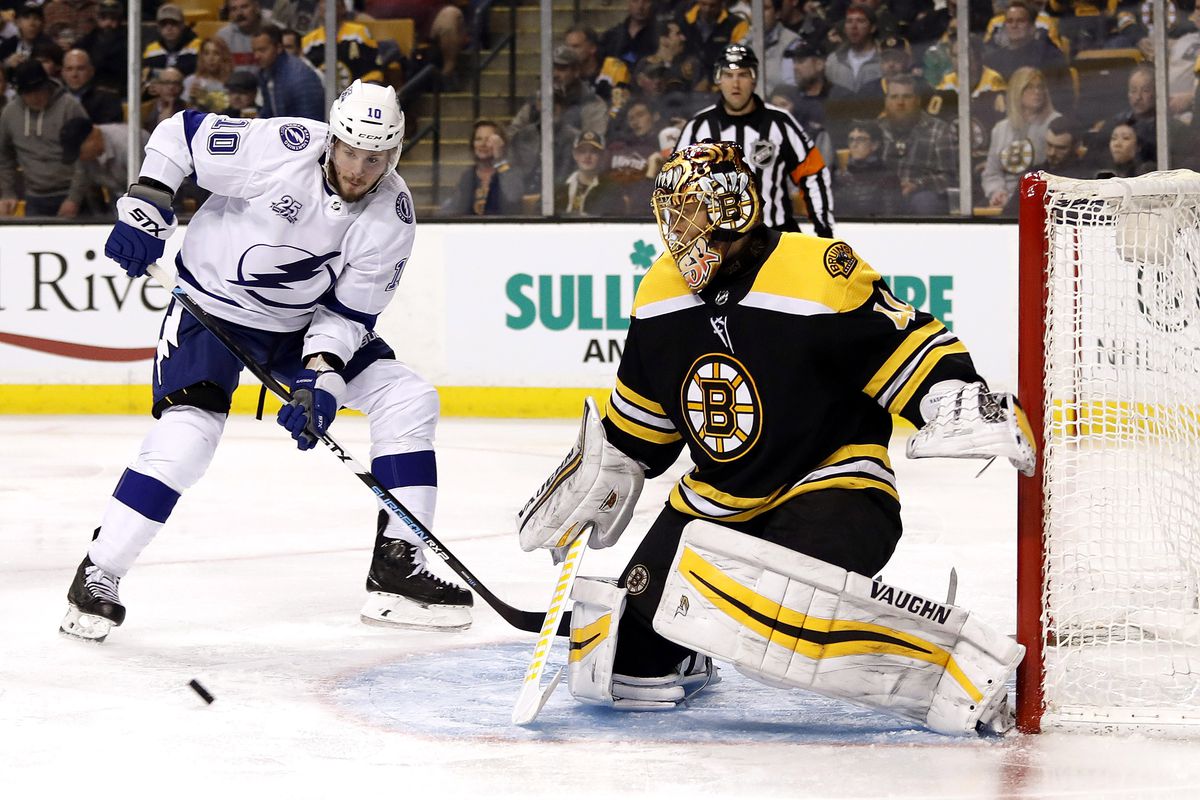 Bruins forward Ryan Donato will make his series debut on Friday in Boston according to Head Coach Bruce Cassidy. Who he will play with is not yet determined. Donato played one game against the Maple Leafs, finishing with three shots on goal and a -1 rating.

Ryan Donato will play tonight, per Bruce Cassidy. Still TBD who he will play with. #NHLBruins

Both Tommy Wingels and Riley Nash are expected to not play in Game Four while Brian Gionta will make his playoff debut this season on the right side with Sean Kuraly and Ryan Donato.

No Riley Nash or Tommy Wingels on for warmups.

What Needs To Happen

Following two consecutive losses in Games Two and Three, the Bruins are now down in the playoffs for the first time during the course of this postseason. The Bruins struggled to score on their home ice, scoring only once in a 4-1 loss, which came after they trailed 2-0. Clearly, the offense will need to show up if Boston wants to return to Tampa with a tied series, rather than a 3-1 series deficit.

Following a decent start for the Bruins including some chances in the offensive zone, Lightning forward Brayden Point takes a Bruin neutral zone turnover to dance around Chara while driving to the net, scoring on Rask. A tough goal against as it comes only 4:36 into the game.

Following the Point tally, the Bruins continued to make bad breakouts, leading to a bad tripping penalty by Rick Nash. On the delayed call, the B’s left Brayden Point open once again, leading to a 2-on-1 with Steven Stamkos, who just fired the puck high of the net.

On the penalty-kill, captain Zdeno Chara attempted a clear, but the puck went up and over the glass, leading to a delay-of-game penalty. Once the 5-on-3 was killed off, the Lightning utilized the umbrella system to a tee, which eventually led to the one-timer from Nikita Kucherov who finally scored his first of the series.

Boston was granted with their sixth power play of the series and first of the game thanks to a tripping minor by Tampa Bay forward Yanni Gourde. However, after some good puck movement and shots, the Bruins would not convert on the man-advantage, a lost opportunity for the Bruins to cut into the lead over halfway through the period.

Then, with 4:32 left to trail in the period, on a second straight power play, David Pastrnak would slap a rebound past Vasilevskiy, making it only a 2-1 game. That would be Pastrnak’s twentieth point of the playoffs.

David Pastrnak hits 20 playoff points in Round 2. One back of Jake Guentzel. The kids are all right.

Not much else took place in the remaining time, Tampa Bay leads 2-1 after one.

Only 42 seconds into the second period, the Lightning take their third penalty in the game. With a chance to tie the game at two, Patrice Bergeron buries a one-timer from a beautiful feed down low by Torey Krug, tying it at 2-2.

Less than a minute after the tying goal, Boston gets caught defensively, leading to a breakaway by Steven Stamkos. However, Tuukka Rask would make a stellar glove save, most likely his best save of the postseason. Both the goal and save caused the crowd in Boston to get loud, something needed in these desperation home games.

Just to grow the fire in the Garden, Charlie McAvoy lays out Ondrej Palat along the boards, erupting the fans.

McAvoy with a crushing hit on Palat; Acciari, Backes, and Schaller put together a high energy shift. The Garden is rocking.

The Bruins continued to ignite the TD Garden with massive hits along the boards and in open ice, including several by Zdeno Chara and Charlie McAvoy. D-man Adam McQuaid would get nailed in the offensive zone as he attempted to pinch, leading to a scuffle between both teams. Brad Marchand, involved in the mess, appears to lick Ryan Callahan. I guess he has to lick one person in each and every series this year.

The Bruins are throwing BODIES around right now

BRAD IS AT IT AGAIN. #StanleyCup pic.twitter.com/idE04bYoNb

Boston would extend the chances in the second period in what is quite possibly the best hockey we have seen by Boston in this series. Tampa has struggled to get out of their own zone, while Boston is doing great in all zones. Rask has needed to make some crucial saves, which to his credit, he has done a great job of doing so.

The only real negative in the period was a questionable hit by Brad Marchand. Marchand bent down to hit Ryan Callahan near the knees, a play that was unneeded as a shoulder-to-shoulder hit would have sufficed.

At that, the period would come to a close. Some strong play for every line, especially the bottom-six. The second period was often in the Tampa Bay zone, leading to very few offensive zone faceoffs for the Bolts.

Another twenty minutes of this for the Boston Bruins and we could very be headed back to Florida with a tied series.

The score is tied 2-2 after forty minutes.

Roughly five minutes into the final period, Bruins are called on a weak penalty, but the call ended up helping the Bruins, as an exhausted Brad Marchand fed the puck towards the net, allowing Patrice Bergeron to deflect the puck top shelf, past Vasilevskiy, giving Boston the 3-2 lead.

Marchand and Bergeron connect while shorthanded to give the Bruins a lead pic.twitter.com/kejEnN5pcX

Not long after the goal, while on the same penalty kill, Zdeno Chara would level Tyler Johnson in the defensive zone with a clean, solid hit. In retaliation, Johnson would hook Chara where the sun does not shine, an obvious penalty.

Tampa would, however, be able to successfully kill the penalty off, bringing the game back to 5-on-5 with less than ten minutes left on the scoreboard.

As the intensity increased, Torey Krug went into the boards very awkwardly as he was racing for the puck, with Alex Killorn right behind him. Krug did the splits and his ankles bent in an odd way. He limped off of the ice and headed down the tunnel.

Torey Krug with one terrible crash into the boards. He gets up to his feet and down the tunnel with help. That looked ugly.

After the earlier hooking call against the Bruins, Kucherov looked to hook McAvoy behind Tuukka Rask, who ended up falling to the ice and turning the puck over. Somehow, Steven Stamkos would be fed the puck by J.T. Miller in the slot, scoring the one-timer. 3-3 with 6:26 to go.

Acciari gets called for taking down Hedman and Kucherov doesn’t for that? Man… #NHLBruins

Lightning get away with a hold, Stamkos ties the game pic.twitter.com/VCrepEpP11

Back and forth action would lead us to the end of the game. Before that though, some good zone possession from the Bruins, only for Kevan Miller to fan on the puck on the blueline. Nikita Kucherov would race down the ice, but some great defense by Matt Grzelcyk would prevent the shot.

Torey Krug would not return to the game in the third-period, no word on the extent of his injury at this point.

Boston’s play in the third was far inferior to the second period. 3-3 after 60 minutes means overtime for the first time in Boston’s playoff year.

Just prior to the beginning of the first overtime session, the Boston Bruins announced that defenceman Torey Krug will not return to the game due to the lower-body injury sustained in the third period.

Boston opened up overtime with a great shift by the DeBrusk-Krejci-Rick Nash line, but no such luck when it comes to winning the game.

However, not even four minutes into the overtime, Tampa Bay’s Dan Girardi scores the game-winning goal. Brian Gionta standing right beside Girardi.

The second loss at home for the Bruins, now down 3-1 in the series, headed back to Tampa.

Dan Girardi gets it by being in front of the net. He’s not there often but it paid off. Great job by Ryan McDonagh on the pinch and by Alex Killorn to keep it in, take it down and put it to the net for Girardi. Lightning up 3-1 in the series.

A real heartbreaker for a team who played so well in the second period, but the focus needs to turn to Game Five, possibly the last game of the 2017-18 season.