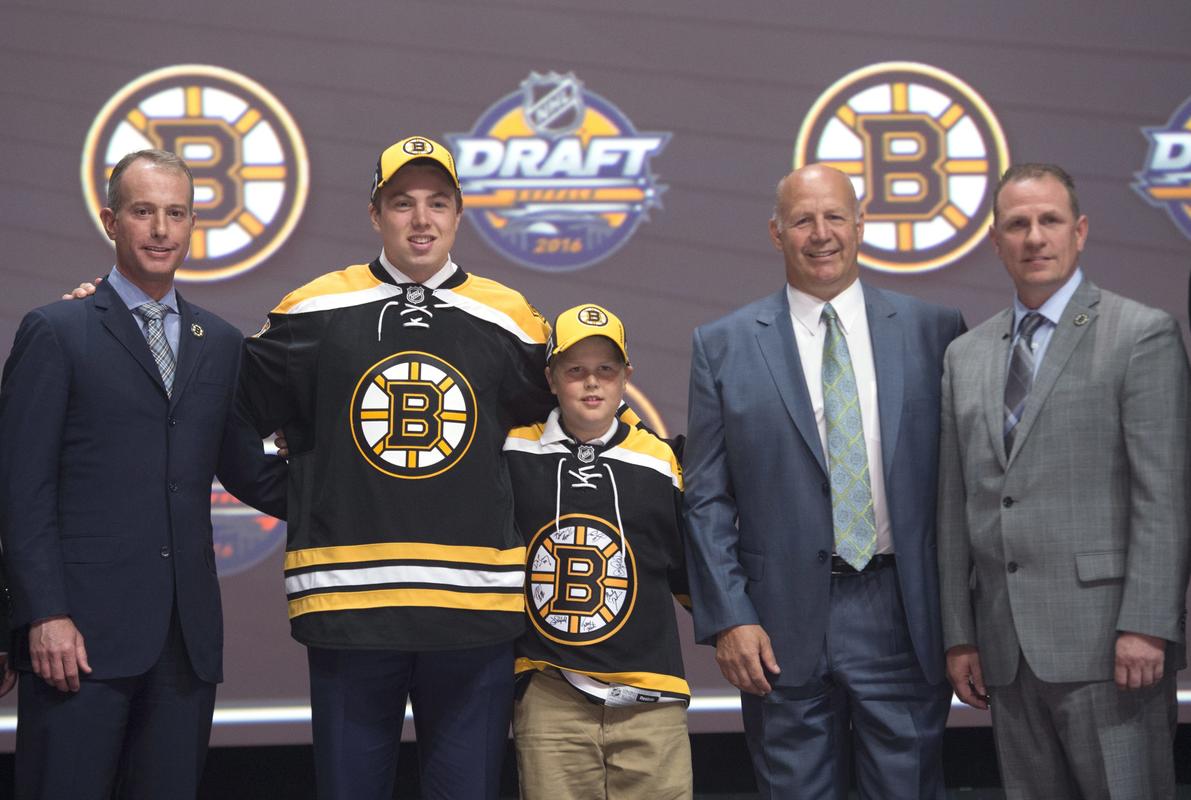 A mere few seasons ago things were not looking too hot for the boys in black and gold. After a start to the season in which the Bruins continued to look like the perennial playoff contenders they had been since the 2007-2008 season, they stumbled down the stretch and missed the playoffs on the final day of the regular season. This would mark Peter Chiarelli’s last season as the general manager of the Bruins, and his shoes would be filled by former player and assistant general manager Don Sweeney on May 20th, 2015.

Some of Sweeney’s initial moves were somewhat questionable, specifically at the 2015 NHL Entry Draft in Buffalo, New York. Originally just having a single 1st round pick, Sweeney went out and acquired both the Calgary Flames’ and Los Angeles King’s draft picks for Dougie Hamilton and Milan Lucic, respectively. This gave Bruins management picks 13-15, and the goal at the time was to move up into the top 5 and likely select defensemen Noah Hanifin. However that didn’t pan out, and the Bruins selected defensemen Jakub Zboril at 13th overall, winger Jake DeBrusk at 14th overall and winger Zach Senyshyn at 15th overall.

Both Zboril and Senyshyn are still developing, but Jake DeBrusk had an impressive debut season in 2017-2018, tallying 16 goals, 27 assists for 43 points in 70 games. Most impressively was the 6 goals and 2 assists he scored in 12 playoff games this spring.

DeBrusk showed a jump and energy in the playoffs that the Bruins desperately needed. He brought a 110% level of effort on every shift and managed to score 2 goals in game 7 against the Toronto Maple Leafs, the second of which was the game-winning goal. DeBrusk was one of the most consistent players during the Bruins short playoff run. He gutted out tough shifts when he had to and came through massively in clutch moments. It could be said that without DeBrusk’s performance, the Bruins would not have beat Maple Leafs in game 7 to advance to the conference semifinals.

DeBrusk hasn’t been the only shining star to come out of the draft since Sweeney took over general manager duties. The Bruins’ 1st round pick in 2016, defenseman Charlie McAvoy, also selected at 14th overall made the jump to the NHL during the 2017 Stanley Cup Playoffs. McAvoy seamlessly fits into the Bruins’ D corps in their 6-game series loss to the Ottawa Senators. Starting on the top pair on Zdeno Chara’s right side, McAvoy had a solid rookie season, potting 7 goals and 25 assists for 32 points in only 63 games played.

McAvoy also showed to be a clutch player when it came down to it in big moments during the season, winning 2 shootouts, one against the New Jersey Devils in the 11th round, and one against the Winnipeg Jets, giving the Bruins valuable extra points. Not only impressing in the shootout, but the young defenseman also scored the game-winning goal to cap off a 2-goal comeback against the Carolina Hurricanes down the stretch to keep a strong points streak going for the Bruins.

McAvoy and DeBrusk fit so well into the Bruins’ lineup this past season, and their strong rookie seasons helped propel a team that wasn’t expected to even make the playoffs to a 50-win, 112-point season. Much of that is a credit to the players themselves, but head coach Bruce Cassidy gave them confidence by playing them in high-pressure situations. Zdeno Chara and David Krejci must be given some credit too as they were the perfect mentors for two young guys just getting the initial taste of NHL action.

These two are special players, as are many other young guns in the Bruins’ system. It is only a matter of time before they occupy the status of the NHL’s elite players and hopefully a space on one of the Stanley Cup’s rings too.