Rehashing The Bruins’ Approach To The 2018 NHL Draft

Earlier this season, I did a deep dive on what I felt the Bruins could do at the 2018 NHL Draft. Obviously, several things have changed since then. For one thing, the Bruins no longer have a 1st Round Draft pick, as it was surrendered in the Rick Nash trade. Additionally, my opinions on players have changed and evolved as the season has gone forward. So, let’s take another look at what the B’s could do with their later picks, in order to maximize the value of the pick. A few things before I begin.

The Bruins have the following selections in the 2018 NHL Draft:

3rd Round: 77th Overall (via Florida in the Frank Vatrano deal)

So, who do I think they should target given that they won’t have a 1st Round pick? The idea is to find guys that have slipped through the cracks for a variety of reasons, who will then be available later in the draft. 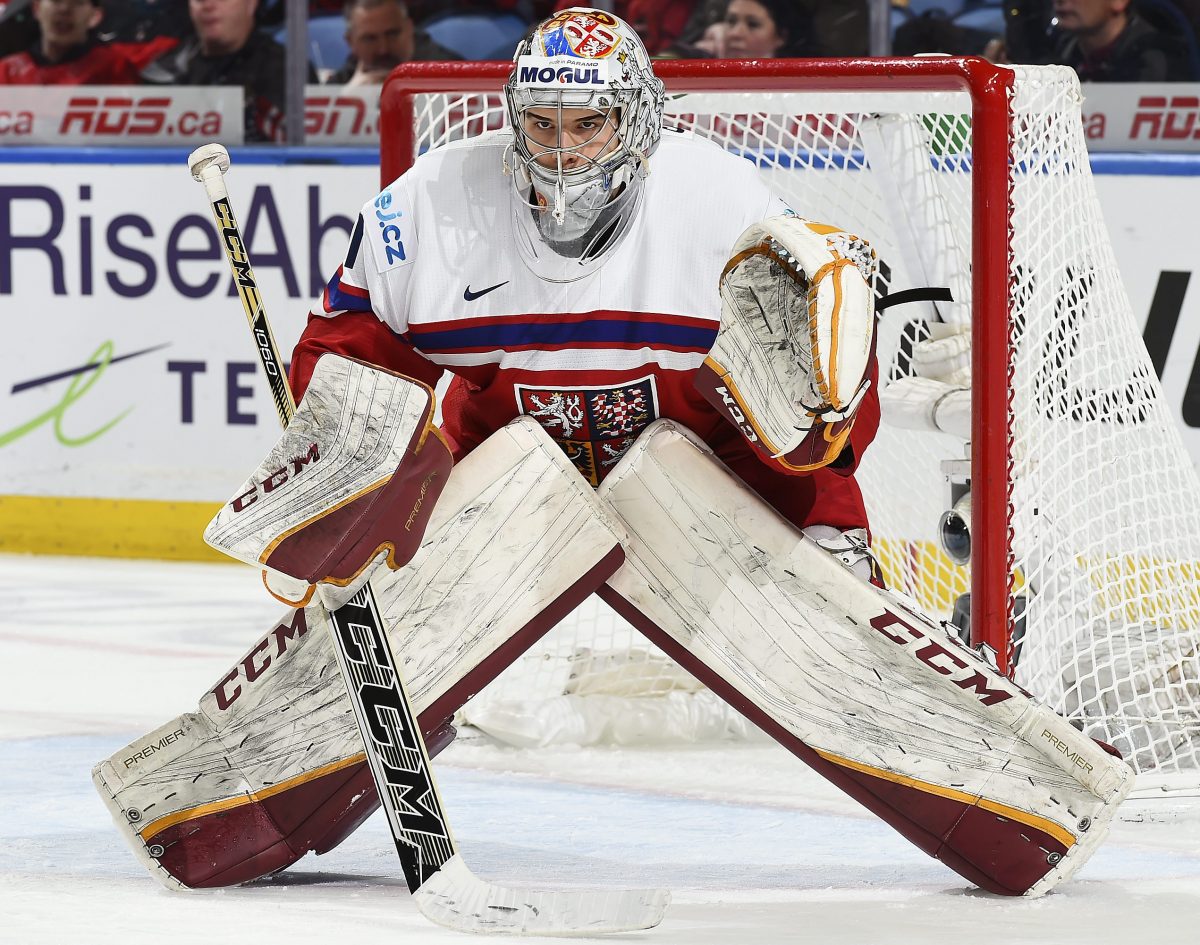 The Bruins had a plan in place with their goaltending and promptly watched it disintegrate when Malcolm Subban was claimed on waivers by the Vegas Golden Knights. Daniel Vladar looks good, not great, and Jeremy Swayman had a good freshman campaign at the University of Maine, but neither one projects as a truly elite goaltender. Skarek is the one goaltending prospect in this year’s class who has the ability to become one. He has been impressive in the professional ranks in his native Czech Republic since the age of 16, an impressive feat for any player, let alone a goaltender.

He has decent size, impressive athleticism, and his positioning is progressing nicely. He had a horrendous World Junior Championship, but that should not scare any team away from taking him. This is a player who should be available in the range of the B’s 2nd Rounder, and if he is available, they could replace the upside Subban brought to the table with Skarek. The underrated upside of this pick is that he could remain in the Czech Republic for a few more years before even attempting to come over to North America.

With the limited number of spots available for goaltenders within the organization (realistically, only 6 lineup spots, and 3 starters), the ability to have Skarek play in a decent professional league while getting the bulk of the starts cannot be undersold. 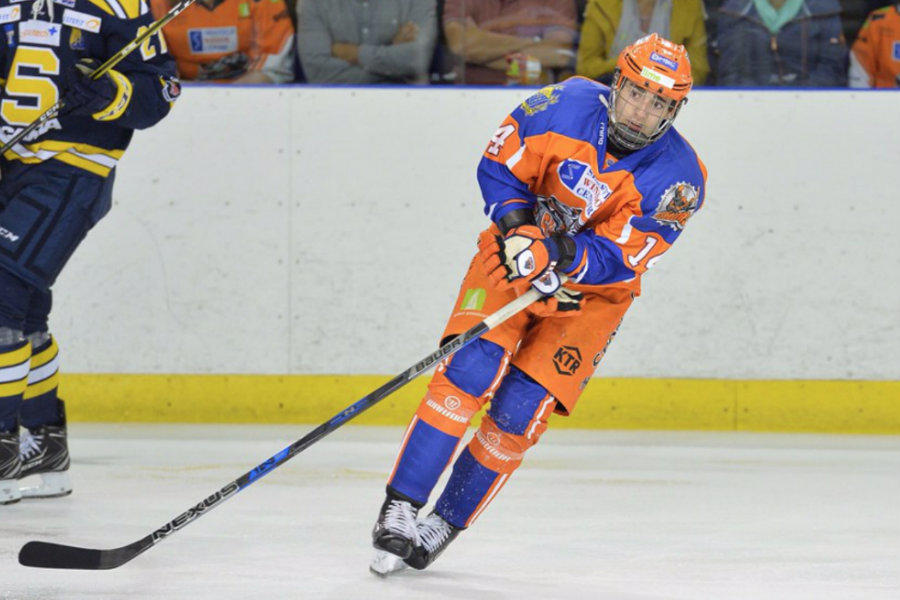 Kirk wins the “Who in the heck is that guy” award. The British native has never played outside his home country but has been playing in the EIHL (English Ice Hockey League) for two years already. In the Brits’ U20 games this year, as they attempted to be promoted from the Division 2A level, he had 7 goals and 7 assists for 14 points in 5 games. As a 17-year-old. He is easily the most talented player the British system has ever developed solely on their home turf – and the hockey world has taken notice. More than half a dozen teams have already expressed interest in drafting him, and he plans to (and will likely be drafted into) playing in the Canadian Hockey League next season. He needs to fill out his frame significantly, but he is one of the most dynamic players in the draft and has Nikolaj Ehlers-esque afterburners.

As a 15-year-old, he played in 10 games at the U20 level in England and put up 44 points. He played 17 games at the U18 level that same year and scored an absurd 98 points. Because of the unique situation he presents, the plan is for him to come over to North America and skate for a few NHL teams before the draft. It’s not just him either. His teammate, Kieran Brown, is a year younger than Kirk and is already being discussed as a potential draft pick in next year’s NHL draft.

The closest a player born, raised, and trained solely in the United Kingdom has come to the NHL since Tony Hand was taken by the Oilers in 1986 (Hand is widely considered the greatest English-born hockey player of all time, and has drawn praise for his ability from Wayne Gretzky) was the son of Rod Stewart (yes, THAT Rod Stewart), Liam, who spent time with the Spokane Chiefs of the WHL, became a go-to offensive player for them, eventually wore a letter for them, and played a few seasons in the ECHL before heading back home across the pond. Kirk will almost certainly surpass Stewart and Hand. Get ready, NHL. The British are coming. 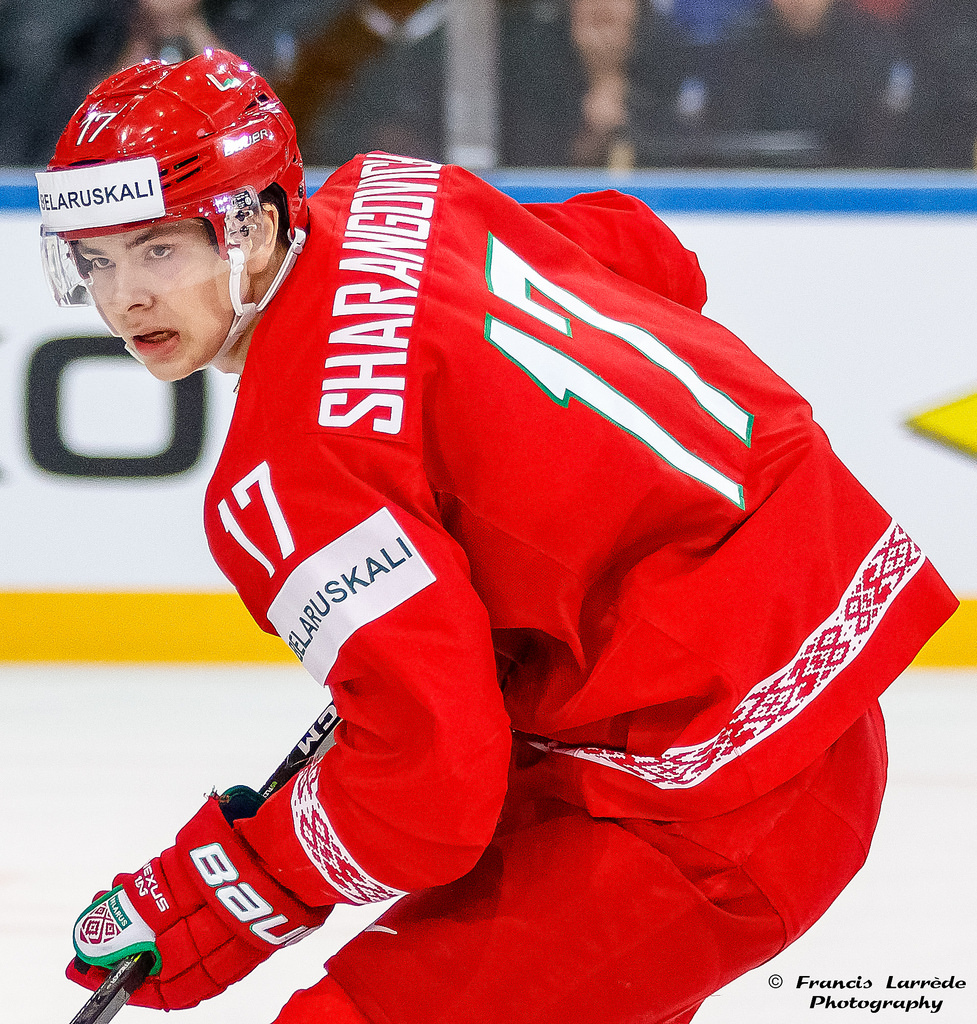 Scott Wheeler (The Athletic): Not Ranked

Everybody has that one prospect that they can’t get enough of, and Yegor Sharangovich is the guy I’d die on a hill for (metaphorically speaking). He’s been passed over twice already, but every time I watch him play, I’m more and more convinced that he’s going to be a player. He was far and away the best player for Belarus at the World Junior Championships this year and has routinely been a part of the Belarussian team at the World Championships in the spring.

He also got regular playing time this year in the KHL as a teenager, an impressive feat for a league known for stifling its teenagers. For reference, Alexander Ovechkin scored 13 goals and 13 assists for 26 points in 37 games in his draft-plus-one year. This past year, Sharangovich had 4 goals, 8 assists for 12 points in 47 games. Not necessarily on Ovechkin’s pace, but Ovechkin was getting significantly more high-end opportunities than Sharangovich. I love his release, and his dynamic ability to generate offense. Naturally, he is a little suspect in his own end, but that comes with experience. I think this is the type of player who is more than worth the risk in the later rounds because the upside is too high to ignore. The only question is if and when he comes across the pond. 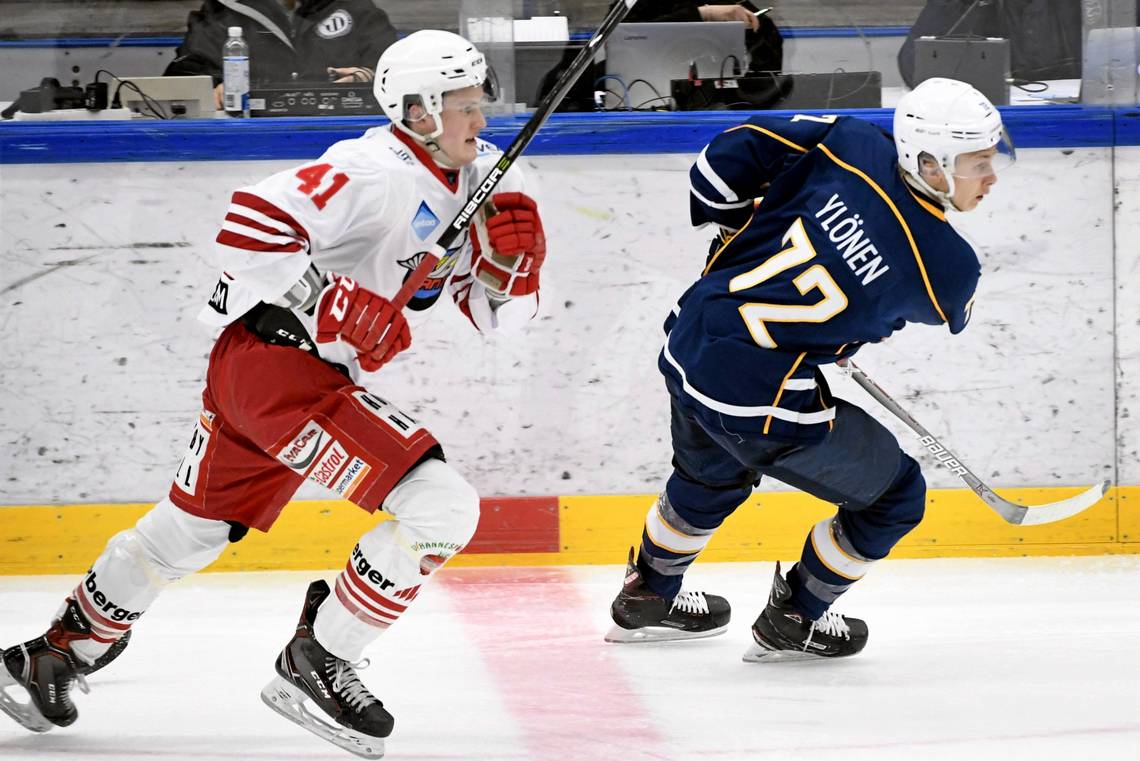 The American-born son of former NHLer Juha Ylonen (he was born in Arizona while his father was playing for the then-Phoenix Coyotes) is another European teenager playing in a league of men. Bruins fans will see a little bit of Jake DeBrusk in the way he moves on the ice, but the players are relatively different in their style. While DeBrusk is a straight line player, willing to go to the dirty areas constantly, Ylonen is much more of a perimeter player. He needs to add some muscle mass, and he needs to get more comfortable in his own end, but the vision and skating are already elite, and he seems to process the game relatively well.

He has a good, not great release, and could use it a bit more. He feels like someone who is playing in a lower echelon European professional league who may have a higher upside than he is able to show (a la a Jesper Bratt or Sebastian Aho – the Finnish one). He is a worthwhile investment in the 2nd, and should be a target should he slip all the way to the 3rd. 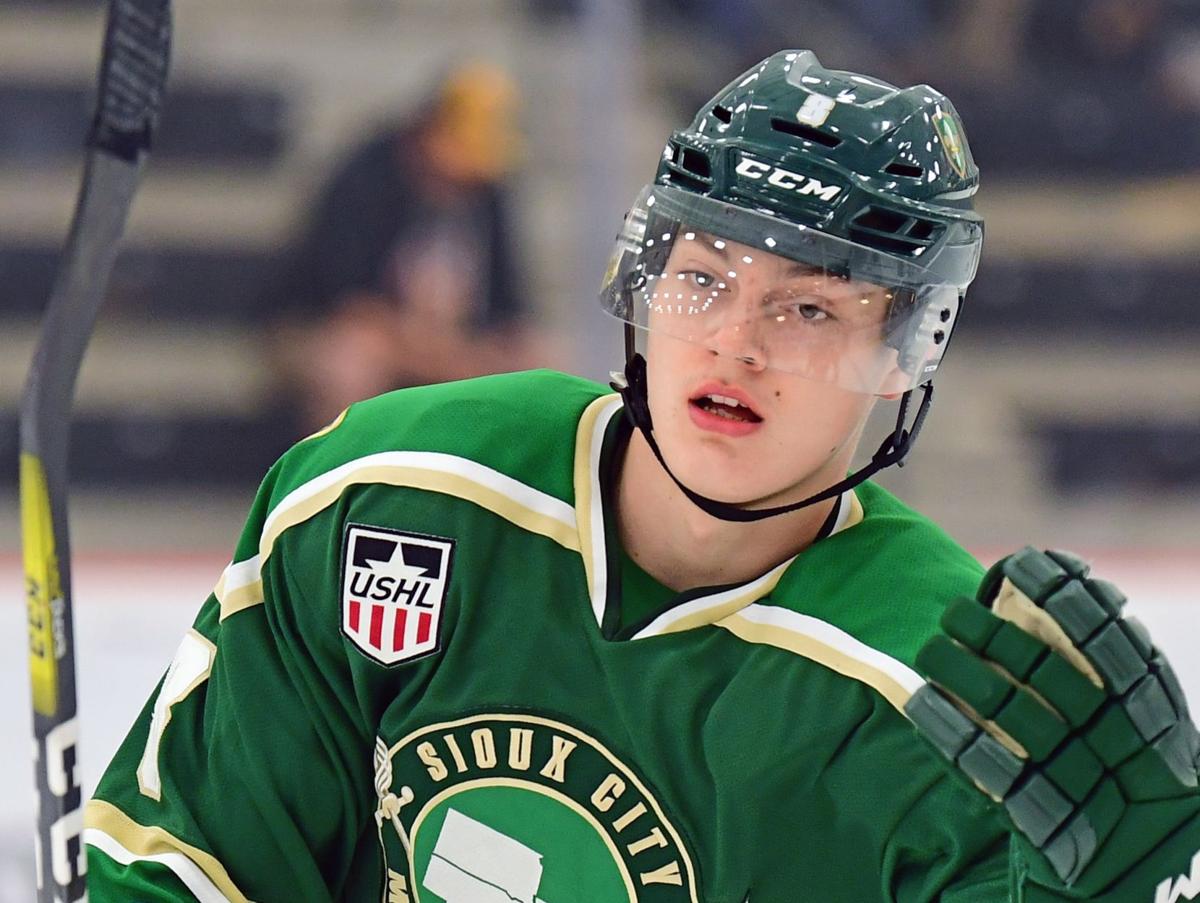 The Wisconsin commit has a wicked shot, and it is difficult not to compare him to fellow Finn and 2017 1st Rounder Eeli Tolvanen. Ranta has a tendency to disappear within a game, and when he’s off, he’s very off. When he’s on, he has one of the best releases in the entire draft, and he already has the frame to work well along the boards or in front of the net offensively. He needs significant work in his own end, and I worry about his ability to think the game at times, but the raw skill set is difficult to deny. 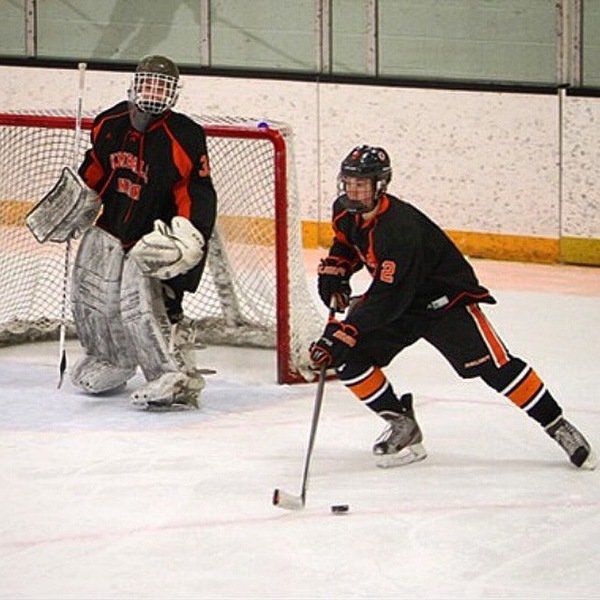 Scott Wheeler (The Athletic): Not Ranked

Harris is the epitome of the modern defenseman. He is an excellent skater, he makes a good first pass, and he is as cerebral as they come. The Northeastern commit is clearly a ways away from the NHL level and will play a year of juniors either with the Youngstown Phantoms of the USHL or in the USPHL’s NCDC conference closer to home next year as a result, but the upside as a 3rd or 4th round pick is hard to deny. He still has plenty of room to grow into his body, and, while I hate throwing intangibles around, he was the captain this year at Kimball Union, a school with a long history of producing high-caliber NCAA and pro players. He oozes with potential.