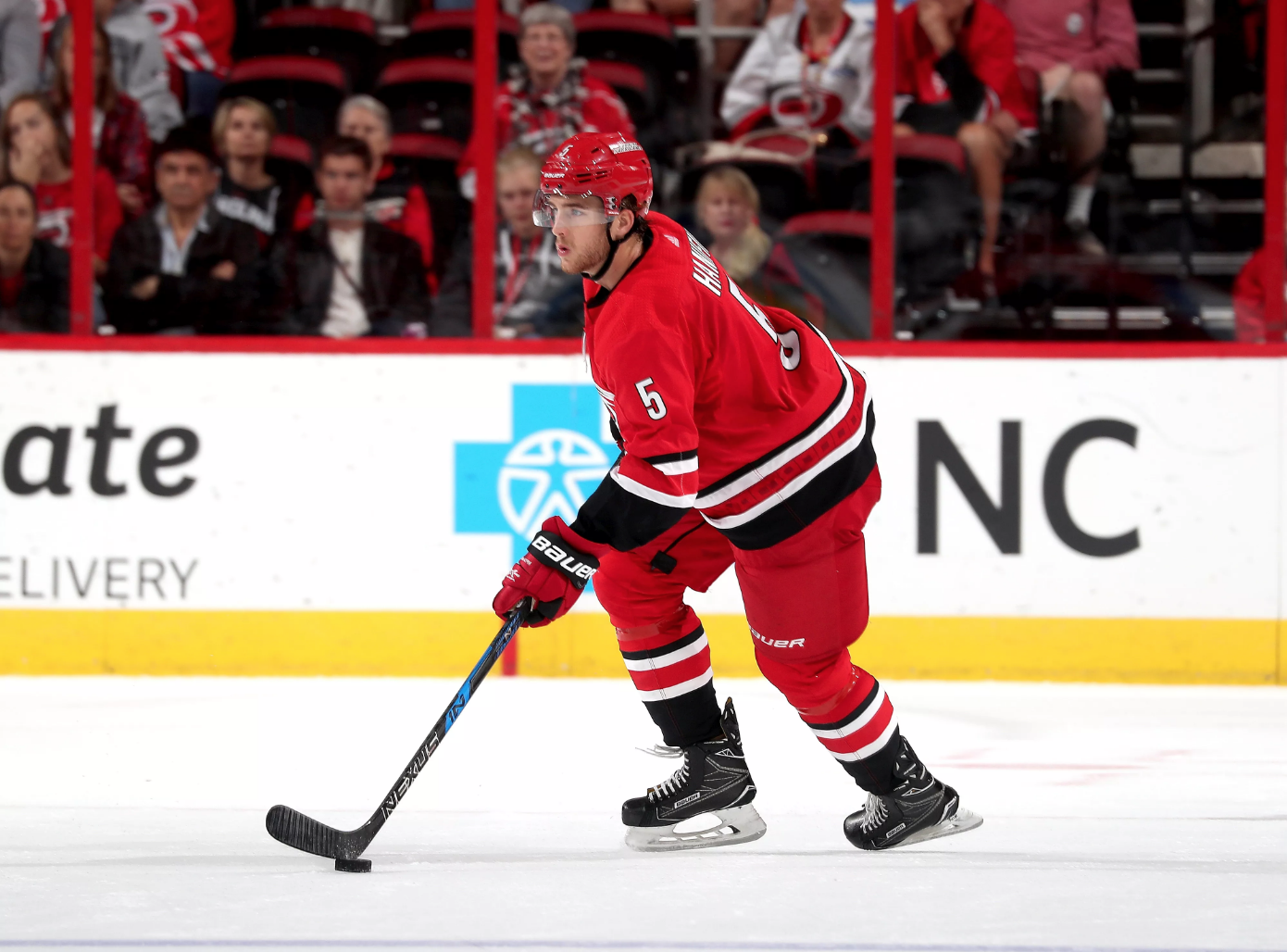 The Boston Bruins have shown through injuries, poor starts in their playoff series against the Tampa Bay Lightning, and their aging leader Zdeno Chara who has to retire eventually that there is a need for a mobile, two-way left defenseman with upside. Ideally, this defenseman would line up on Brandon Carlo’s left side, rounding out the top 4.

That’s where Noah Hanifin comes in.

Drafted 5th overall by the Carolina Hurricanes in the 2015 NHL Entry Draft, Hanifin grew up just outside of Boston in Norwood, Massachusetts and attended Boston College before being drafted. Hanifin played just one season for the Eagles as a 17-year-old, the second youngest player in Eagles history. He immediately made the jump from college hockey to the NHL, signing a 3-year entry-level contract with the Hurricanes and making his NHL debut on October 8th, 2015 against the Nashville Predators. It only took the then 18-year-old just over 4 weeks to score his first NHL goal against current Bruins backup goalie Anton Khudobin then of the Anaheim Ducks on November 16th, 2015.

While he may have potted his first goal from the point, a significant portion of Hanifin’s goals has come from much closer to the net. Combing through some highlights on YouTube it’s clear that he’s not shy about jumping into the rush and getting to the dirty areas where most goals are scored. There are numerous examples of this, despite his limited experience in the league.

Hanifin has seen consistent ice time in high-pressure situations in his short NHL career, has taken those opportunities by the scruff of their neck and taken advantage of them. He’s scored 4 game-winning goals, multiple of which were in overtime. These goals further show his willingness to take a risk and attack the net off the rush as well as with possession in the zone to tickle the twine at the back of the net.

A young defenseman with a knack for showing up clutch in important moments can be invaluable to a team with a mix of young guns and veteran leaders vying for a Stanley Cup. The 21-year-old, 6’3″, 206-pound Hanifin could be exactly that for the Boston Bruins for years to come.

What do his statistics look like over the past few years?

Quite impressive for someone playing on a team that has missed the playoffs for nine consecutive seasons. His rookie season totals: 4 goals and 18 assists for 22 points (4-18-22) with a -14 plus/minus rating. He’s shown steady growth since then, posting 4-25-29 totals alongside a -19 rating in his sophomore season. His 3rd season and this past 2017-2018 season was his most successful offensively; he posted 10 goals, combined with 22 assists for a total of 32 points. Once again his plus/minus was not attractive at -20, but that can be overlooked as plus/minus typically isn’t very indicative of a player’s ability especially when said player plays for a team that finished 6th in its division (36 W, 35 L, 11 OTL, 83 points). Transplant Hanifin onto the Bruins, a top-tier team in the NHL who’s coaching staff know how to use a defenseman of his caliber, and he’d flourish.

How would he fit in with the Boston Bruins?

First and foremost, Hanifin would have no qualms about lacing up the skates for the black and gold considering he’s a Massachusetts native and grew up in the Greater Boston Area. His size, skill, and strong skating ability fits in line with Don Sweeney and Bruce Cassidy’s current philosophy of building a fast, physical hockey team. Hanifin would most likely hop into the top 4 as Brandon Carlo’s defensive partner.

Secondly, the Bruins current management is very fond of the young defenseman as the goal of stockpiling 1st round picks in the 2015 draft was to move up and draft him in the top 5.

Here’s a look at what the team could look like at the start of the 2018-2019 season if the Bruins were to acquire Noah Hanifin (disclaimer: salaries and forward lines are hypothetical as the focus is solely on the defensive pairings here):

Hanifin perfectly fills the Bruins’ need for a top 4 left-shot defenseman who can play in all situations. He can play on the power play and produce, can eat up some minutes on the penalty kill and Bruce Cassidy would feel confident sending him over the bench in the final 5 minutes of a tie game. Hanifin would give Cassidy the ability to limit Torey Krug’s ice time when it comes to important defensive zone faceoffs. Krug isn’t necessarily bad in his own zone, but nobody would call him particularly great either as he’s a power play and offensive specialist.

On another note, with another strong top 4 defenseman on the left side, Cassidy could shave down Zdeno Chara’s ice time a little bit here and there to keep the big man refreshed and energized throughout the entire season and playoffs. Chara would still be playing the most important minutes, but the Bruins would be forced to rely on him much less.

The Bruins have a good problem on the back end, they’ve got too many good defensemen that do the same thing. Krug and Matt Grzelyck are both good, fast skaters who specialize in offense. Adam McQuaid and Kevan Miller are both big, strong, physical, stay-at-home defenders who are known for shot blocking. Grzelcyk could easily be involved in a trade for Hanifin and would help clear a space for him as well.

As is shown in the lines above, if Hanifin were to be acquired, Grzelcyk and McQuaid would likely be the odd men out. The ice time would be split fairly evenly between the 2nd and 3rd pairs, with Krug getting more power play time and Hanifin taking on penalty killing duties. Krug would remain in his top PP unit spot, with Hanifin likely landing on the secondary unit, as well as the 2nd PK unit.

Hypotheticals are all well and good, but how realistic is it that the Bruins could make this move?

Actually quite realistic. Hanifin’s name has popped up in Hurricane trade rumors before during the season. Bob McKenzie, one of, if not the most trusted name when it comes to the NHL rumor mill, said that nearly everyone in Carolina is available.

McKenzie on TSN 1050 just said everyone in Carolina is available except Aho.

The Carolina Hurricanes are the perfect trading partner for the Bruins. The Canes have a logjam on defense as well with Faulk, Slavin, Fleury and of course Hanifin. Acquiring a guy like Hanifin is no easy feat in today’s NHL. Young, mobile, talented defensemen with size and speed are a hot commodity and always have been, more so now than ever before. Don Sweeney has to be willing to part ways with a good crop of assets to make this trade happen.

Some possible deals that Sweeney could make:

Option A: Grzelcyk, Heinen, a 2019 1st round pick, and a forward prospect if need be.

If you’d like to weigh in, check out this Twitter poll below and let me know what you think.

Working on a piece about trading for Noah Hanifin of the Carolina Hurricanes, want to get a general idea of the fans' opinion (this poll will be featured). Would you trade Heinen, a forward and D prospect and a 2019 1st for him?