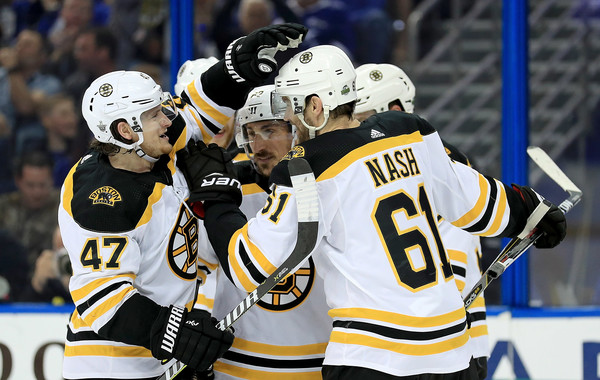 When constructing the roster for the 2018-2019 Boston Bruins, there many factors that Don Sweeney and his team will need to examine. We have already looked at the simplicity that is leaving alone the Marchand, Bergeron, Pastrnak line; so let’s continue to take a look at two more of the Bruins lines from this past season. 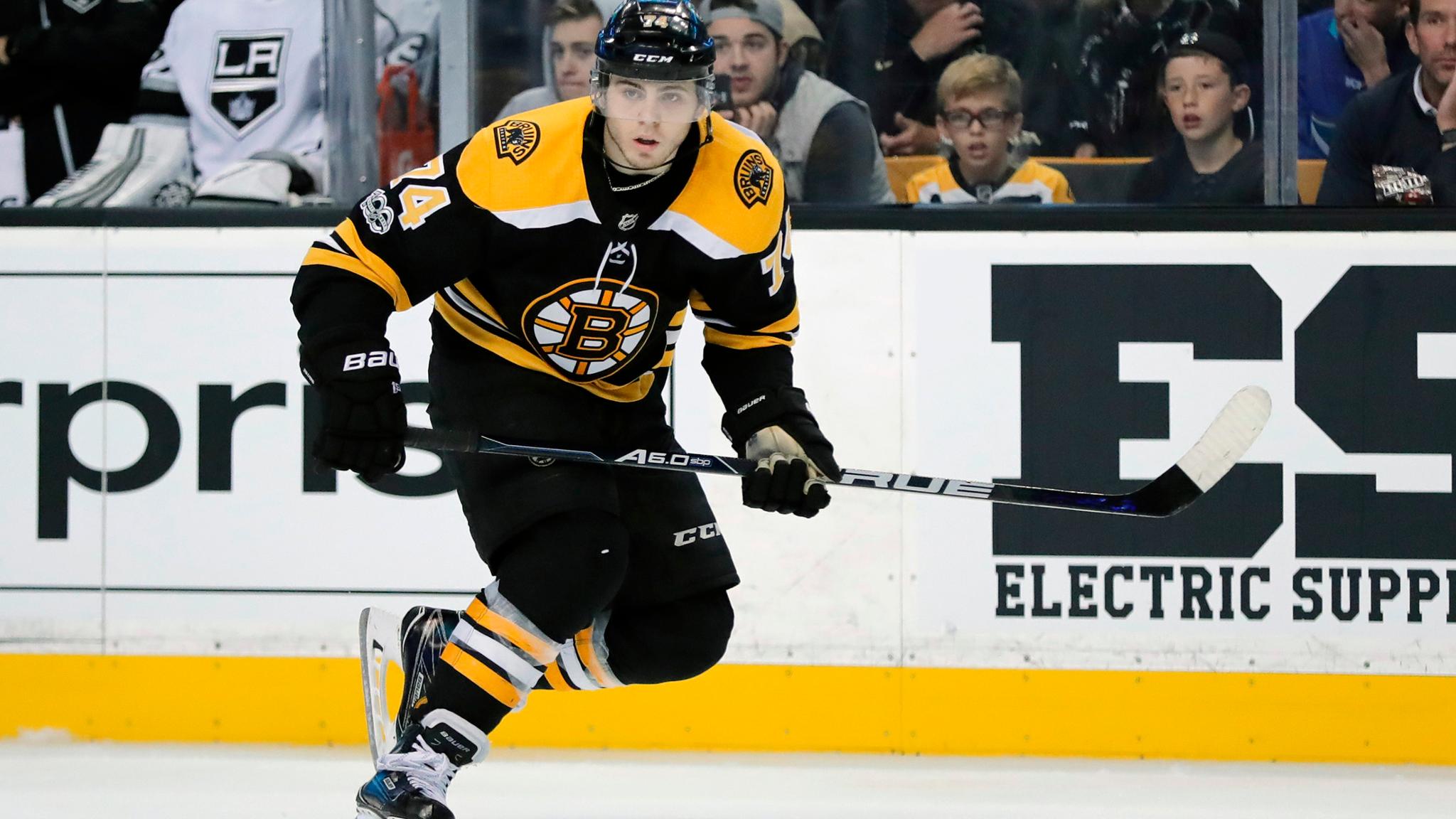 The second line left wing was one of the biggest questions marks coming into this season. Early in the season, it was thought that Anders Bjork had won the job. It took a season-ending shoulder injury to pull Bjork from the lineup – we will have more on him in a later article – and open the door for 21-year old Jake Debrusk. It wasn’t long before he locked down that slot for himself. By posting 43 points in 70 games, and finishing with a +13 rating, DeBrusk showed great chemistry with Krejci – like we haven’t seen since Milan Lucic was in town. With his performance and goal celebrations of just pure joy, Debrusk has earned himself the LW spot on line number two for at least one more season. Dethroning Debrusk shouldn’t be out of possibility, he still needs to be pushed to perform. Cassidy needs to be open to letting someone steal that job from him in training camp and preseason, but it is going to take a LOT for that to happen.

It would greatly benefit Krejci for Cassidy to make it near impossible to for Debrusk to lose his spot because the Czech centerman has already had too much of turnstile on his right side, it’d be nice to see the left side remain steady again. Krejci has arguably the worst contract on the team with a cap hit of $7.25 million he generated a lot of fan buzz about dealing off the big contract. With only two years remaining on his contract it probably wouldn’t be too difficult to find a willing trade partner, however, I question which teams who on this short list would be ones that Krejci would waive his modified no-movement clause to go to.

Let’s say all of the above occurs, and you find the perfect trade partner, you would be selling Krejci at an all-time low as he just showed in 12 playoff games that he is still capable of being the point-per-game player who earned the $7.25 million contract. His performance also looked completely rejuvenated upon the arrival of Rick Nash. By putting up 10 points in those 12 playoff games, Krejci has shown the value of keeping him is greater than what you would receive in return for any deal you send him away in. It will be up to Cassidy and Sweeney to ensure that the best possible linemates are next to Krejci at all times.

Last but not least, Rick Nash. This line saw the addition of the second Nash at the trade deadline along with the subtraction of David Backes from this line – yes the team lost Spooner in the deal, but Backes was bumped to replace him on the third line. Nash proved to be a significant upgrade over Backes on the wing, and they didn’t give up too much to get him. In fact, even though I am a fan of Spooner’s, I like the deal overall – we can talk about that further at another time.

The point here is that this line was considerably better with Rick Nash over David Backes once the move was made and it showed that this team is capable of having two offensive powerhouse lines. We also learned that Krejci has only “lost a step” when he doesn’t have the right guys around him. So now for the big question – do the Bruins resign the 33-year-old winger?

The correct answer to this is no. Not because they can’t, but because they shouldn’t. Don’t give me that “for the right contract they can bring him back” crap. Any team would take any player “for the right contract.” The issue here is going to be that Nash will want more than the Bruins SHOULD be willing to commit to him. He is 33 years old and coming off of a 21 goal season that also saw 13 assists. He may be looking for his last long-term deal, and if he is, that isn’t something Sweeney should touch with a 30-foot pole. IF Sweeney can convince Nash to take a one year “prove it” type deal, then you may have something to talk to him about. Putting up only 34 points in 71 games played between the Rangers and Bruins, along with his -19 for the season, Sweeney MIGHT be able to convince him that hitting free agency again at 34 years old with a full season in Boston next to Krejci will help him get a better contract.  Anything longer than this type of one year deal would be one of the biggest mistakes of Sweeney’s time in Boston. If Nash were 10 – or even 5 – years younger, I would have no hesitation in bringing him back with more term, but right now this team has too many young talented players who will be owed significant pay raises in the next two seasons to sink that much into Nash. They also have more holes opening up that will need addressing, and he absolutely will be getting better offers from other teams looking for his services. 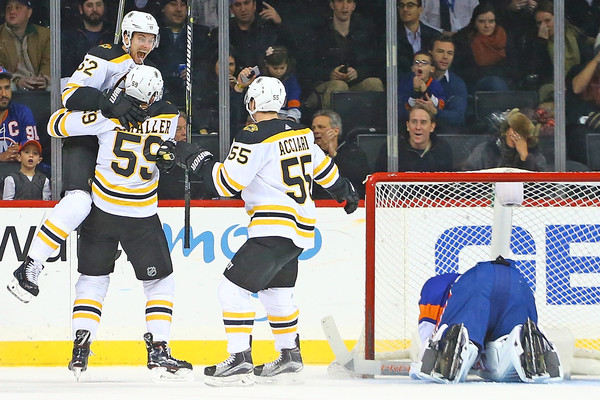 Back when the Bruins won the cup in 2011, they had a 4th line that brought everything you look for in your grinder guys. This year, these three guys showed the same abilities as a fourth line as the infamous merlot line. They were always at their teammates’ side and ready to drop the gloves when necessary. They brought physical play when it was needed, and although they were not what many would consider a “scoring threat,” the combination of these three guys accounted for 47 regular season points and 8 in the playoffs. So what do we do about this line going into next season?

The good news here is that Kuraly is a restricted free agent and can be resigned for qualifying offers under $1 million. This is a no-brainer decision to bring him back. This will allow you one more season to get a better feeling of his true ceiling as a player and have him for another playoff run. It is always important to have players who can find the back of the net in the playoffs – and Kuraly has proven with some big goals he can do just that.

Neither Acciari or Schaller should be overly expensive. If you can retain them for anything shy of $1.5 million for 2-3 years, then that is not only acceptable but is an opportunity that should be jumped on. Yes, this team got in a lot of cap trouble for a few years because Peter Chiarelli invested too much money for too many years in the 3rd and 4th line guys, so this may lead to some of you to wonder why this type of contract would be ok for Schaller and Acciari when it was too much for guys like Paille and Campbell. The difference here is that Schaller and Acciari have shown they COULD if needed play on a higher line in a game in an injury forced Cassidy’s hand. Now I wouldn’t overextend on them, and if another team is willing to give either one of them more than $1.5 million then, by all means, Sweeney should let them overpay. I don’t see anyone else overpaying either of these guys nor finding more value in bringing one of these guys in over someone already on their rosters. In their mid to late 20’s, Cassidy may be able to deal off the last big of their contracts for a team to negotiate with them before Free Agency, but I wouldn’t expect anything more than a late-round pick for either of them.

In summary: Krejci and Debrusk should see no change in their status at this time. Rick Nash should be allowed to walk in free agency. Kuraly should receive his qualifying offer and be brought back on short money to see if he is able to raise his ceiling next season and score a few more playoff goals for you. Acciari and Schaller should be brought back on short-term, low money deals that don’t exceed a combined $3 million. Although I don’t see either one signing more than a 2-3 year deal at that kind of money, it will be worth not having to worry about the fourth line opening up again for those next couple of seasons until you have other young players ready to step up into those minutes.