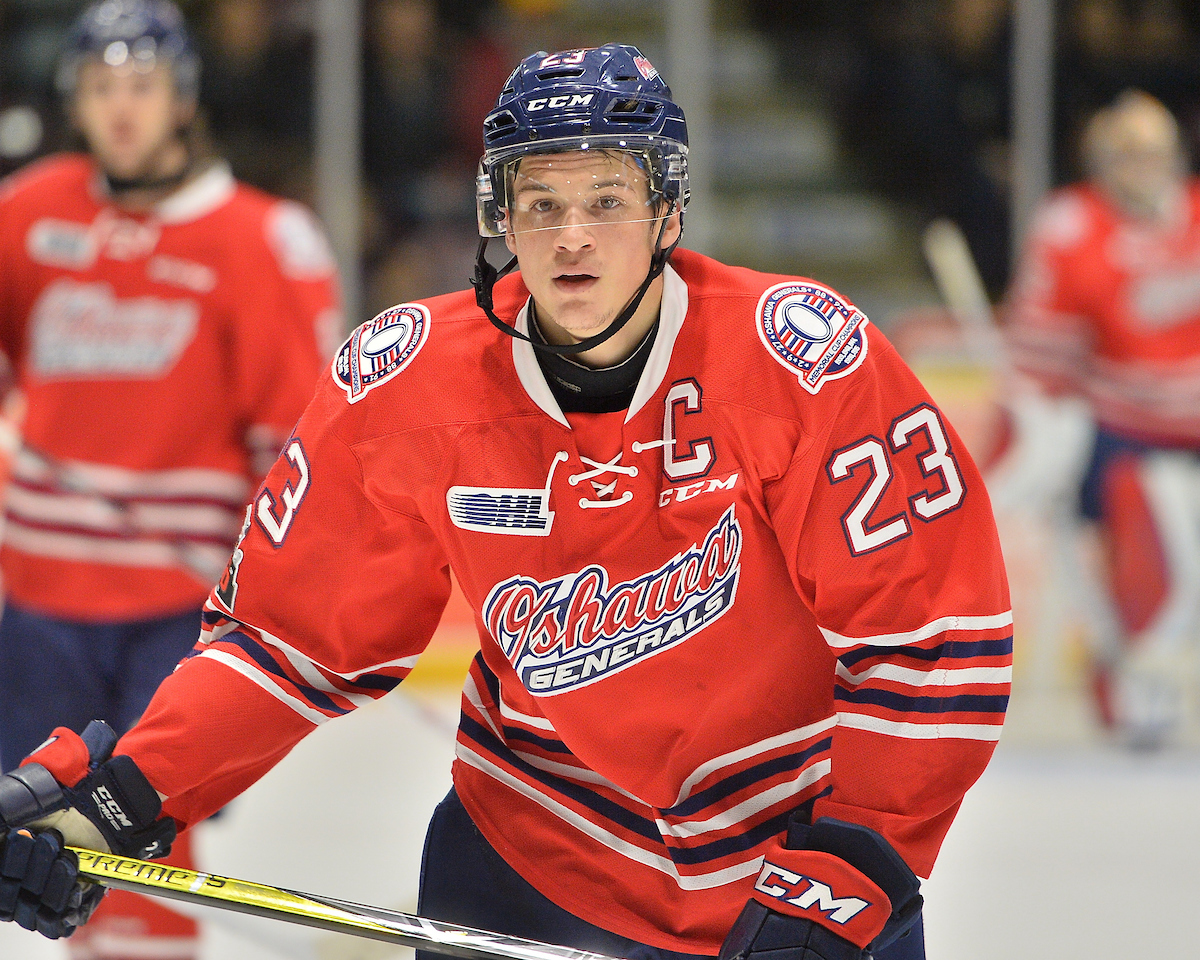 The blackngoldhockey.com writers team and hosts of the Black N’ Gold Hockey Podcast are pleased to announce that we’ve teamed up with Domenic Tiano and the OHL Writers to bring you the Boston Bruins fans a great opportunity to own a jersey signed by one of the B’s most promising young stars in Jack Studnicka.

During the 2017-18 season, Studnicka led his OHL Oshawa Generals team with 72 points in 66 games while serving as team Captain for the first time in his three-year Canadian Major Junior career. In 192 games all with his Generals team, the 6′-1″ 172-pound right-shooting center has contributed 150 points and last his last regular season  22-52-72 numbers were career highs.

Best known in the Prospect Community as “Captain Jack”, the now 19-year-old Studnicka was selected by the Boston team during the second-round of the 2017 National Hockey League Entry Draft held in Chicago, Illinois and has quickly made a name for himself with me and the other Bruins prospect guru’s throughout North America. If you live in the New England area and want to see Studnicka’s tremendous skill-set for yourselves, the Boston Bruins will hold their annual Prospect Development Camp at the Warrior Ice Arena in Brighton, Massachusetts. The development camp festivities are open to the public and will start on Tuesday, June 26th and end on Friday, June 29th. Validated parking is available in the lower level garage for the four-day event and last year I only paid $10 while there for over six hours each day.

We are giving you the opportunity to win an authentic Jack Studnicka Oshawa Generals jersey signed by “Captain Jack” himself. The jersey will be shipped to the winner directly by the Oshawa Generals.

All you have to do is correctly guess how many goals and assists Jack Studnicka will score during the 2018-2019 regular season. In the event of a tie, a random draw will take place from all the correct entries. In the event that no one correctly guesses the amount of goals and assists Jack Studnicka scores during the 2018-2019 regular season, a random draw will take place among all entries received.

Your email must contain the following information:

Do you agree with the contest rules:

NO PURCHASE IS NECESSARY TO ENTER OR WIN. A PURCHASE DOES NOT INCREASE THE CHANCES OF WINNING.

1. Eligibility: This Campaign is open only to those who email their entries (winjacksjersey@gmail.com) and who are 18 as of the date of entry. The Campaign is only open to legal residents of Canada, USA, and is void where prohibited by law. Employees of OHL Writers, Black N’ Gold Hockey Podcast, its affiliates, subsidiaries, advertising and promotion agencies, and suppliers, (collectively the “Employees”), and immediate family members and/or those living in the same household of Employees are not eligible to participate in the Campaign. The Campaign is subject to all applicable federal, state, and local laws and regulations. Void where prohibited.

2. Agreement to Rules: By participating, the Contestant (“You”) agree to be fully unconditionally bound by these Rules, and You represent and warrant that You meet the eligibility requirements. In addition, You agree to accept the decisions of OHL Writers, Black N’ Gold Hockey Podcast as final and binding as it relates to the content of this Campaign.

5. Prizes: The Winner(s) of the Campaign (the “Winner”) will receive Signed Jack Studnicka Jersey. Actual/appraised value may differ at time of prize award. The specifics of the prize shall be solely determined by OHL Writers and Black N’ Gold Hockey Podcast. No cash or other prize substitution shall be permitted. The prize is non-transferable. Any and all prize-related expenses, including without limitation any and all federal, state, and/or local taxes, shall be the sole responsibility of Winner. No substitution of prize or transfer/assignment of prize to others or request for the cash equivalent by Winner is permitted. Acceptance of prize constitutes permission for OHL Writers and Black N’ Gold Hockey Podcast to use Winner’s name, likeness, and entry for purposes of advertising and trade without further compensation, unless prohibited by law.

6. Odds: The odds of winning depend on the number of eligible entries received.

7. Winner Selection and Notification: Winner will the person who correctly answers how many goals and assists Jack Studnicka will score during the 2018-2019 regular season under the supervision of OHL Writers and Black N’ Gold Hockey Podcast. In the event that more than one person correctly answers, a random draw will take place from all correct answers received. In the event no one answers correctly, a random draw will take place from all entries received.  Winner will be notified by email within five (5) days following selection of Winner. OHL Writers and Black N’ Gold Hockey Podcast shall have no liability for Winner’s failure to receive notices due to spam, junk e-mail or other security settings or for Winner’s provision of incorrect or otherwise non-functioning contact information. If Winner cannot be contacted, is ineligible, fails to claim the prize within 30 days from the time award notification was sent, or fails to timely return a completed and executed declaration and release as required, the prize may be forfeited, and an alternate Winner selected. Receipt by Winner of the prize offered in this Campaign is conditioned upon compliance with any and all federal, state, provincial and local laws and regulations. ANY VIOLATION OF THESE OFFICIAL RULES BY WINNER (AT OHL Writers and Black N’ Gold Hockey Podcast’s SOLE DISCRETION) WILL RESULT IN WINNER’S DISQUALIFICATION AS WINNER OF THE CAMPAIGN, AND ALL PRIVILEGES AS WINNER WILL BE IMMEDIATELY TERMINATED.

8. Rights Granted by You: By entering this content (e.g., photo, video, text, etc.), You understand and agree that OHL Writers and Black N’ Gold Hockey Podcast, anyone acting on behalf of OHL Writers, and OHL Writers’s licensees, successors, and assigns, shall have the right, where permitted by law, to print, publish, broadcast, distribute, and use in any media now known or hereafter developed, in perpetuity and throughout the World, without limitation, your entry, name, portrait, picture, voice, likeness, image, statements about the Campaign, and biographical information for news, publicity, information, trade, advertising, public relations, and promotional purposes. without any further compensation, notice, review, or consent. Optional verbiage for Contests: By entering this content, You represent and warrant that your entry is an original work of authorship, and does not violate any third party’s proprietary or intellectual property rights. If your entry infringes upon the intellectual property right of another, You will be disqualified at the sole discretion of OHL Writers and Black N’ Gold Hockey Podcast. If the content of your entry is claimed to constitute infringement of any proprietary or intellectual proprietary rights of any third party, You shall, at your sole expense, defend or settle against such claims. You shall indemnify, defend, and hold harmless OHL Writers and Black N’ Gold Hockey Podcast from and against any suit, proceeding, claims, liability, loss, damage, costs or expense, which OHL Writers and Black N’ Gold Hockey Podcast may incur, suffer, or be required to pay arising out of such infringement or suspected infringement of any third party’s right.

10. Limitation of Liability: By entering, You agree to release and hold harmless OHL Writers and its subsidiaries, affiliates, advertising and promotion agencies, partners, representatives, agents, successors, assigns, employees, officers, and directors from any liability, illness, injury, death, loss, litigation, claim, or damage that may occur, directly or indirectly, whether caused by negligence or not, from: (i) such entrant’s participation in the Campaign and/or his/her acceptance, possession, use, or misuse of any prize or any portion thereof; (ii) technical failures of any kind, including but not limited to the malfunction of any computer, cable, network, hardware, or software, or other mechanical equipment; (iii) the unavailability or inaccessibility of any transmissions, telephone, or Internet service; (iv) unauthorized human intervention in any part of the entry process or the Promotion; (v) electronic or human error in the administration of the Promotion or the processing of entries.

11. Disputes: THIS Campaign IS GOVERNED BY THE LAWS OF Canada AND Ontario, WITHOUT RESPECT TO CONFLICT OF LAW DOCTRINES. As a condition of participating in this Campaign, participant agrees that any and all disputes that cannot be resolved between the parties, and causes of action arising out of or connected with this Campaign, shall be resolved individually, without resort to any form of class action, exclusively before a court located in Ontario having jurisdiction. Further, in any such dispute, under no circumstances shall participant be permitted to obtain awards for, and hereby waives all rights to, punitive, incidental, or consequential damages, including reasonable attorney’s fees, other than participant’s actual out-of-pocket expenses (i.e. costs associated with entering this Campaign). Participant further waives all rights to have damages multiplied or increased.

12. Sponsor: The Sponsor of the Campaign is OHL Writers and Black N’ Gold Hockey Podcast.

13. Facebook: If you use Facebook to communicate or administer a contest or sweepstakes, include the following: The Campaign hosted by OHL Writers and Black N’ Gold Podcast is in no way sponsored, endorsed, administered by, or associated with Facebook.

14. By participating in the contest, You, the Contestant, have affirmatively reviewed, accepted, and agreed to all of the Official Rules & Regulations.

15. The Ontario Hockey League official stats are the only stats to be used for official scoring information.