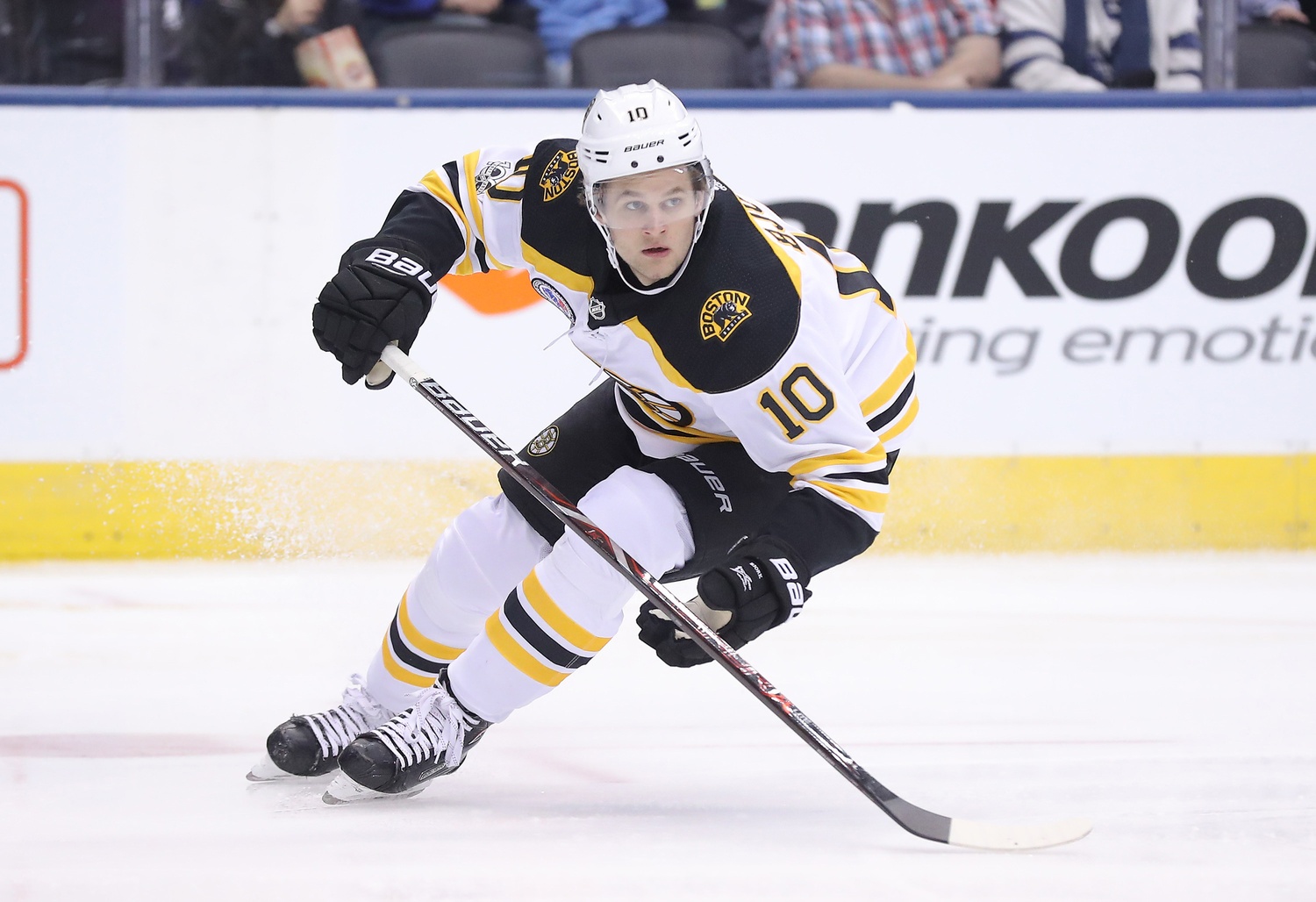 Opening the 2017-2018 season, there was no doubt surrounding the future of the Boston Bruins. The youth movement was officially on, and the B’s faithful fanbase was excited to see what the young guns could do donning the Spoked-B.

The list of newcomers with serious potential seemed to be endless. Most notably there was Charlie McAvoy. Not far behind in terms of hype was Jake DeBrusk. Danton Heinen landed a well-deserved spot in the lineup as well. All of whom delivered in their first full seasons in the big leagues.

Sidelined with shoulder-surgery, Anders Bjork hasn’t been talked about much. However, I still view him as Boston’s top-prospect for forwards. Watching film from earlier in the year has me excited for his return. His hands, vision, shot & passing are elite. #NHLBruins

Among the other younger players generating excitement were Sean Kuraly and Matt Grzelcyk. Brandon Carlo was back. David Pastrnak, still young, was ready to establish himself. And while all these players got their chances to shine in the Bruins’ impressive 2017-2018 campaign, one rookie, one with arguably the most potential coming into the season behind Charlie McAvoy, was robbed of his shot.

Bjork was injured in just his 30th game of the season, a 3-1 loss at the hands of the Anaheim Ducks on January 30, after taking a cross check from Francois Beauchemin. It resulted in season-ending shoulder surgery.

Anders Bjork will miss the next six months (shoulder surgery).

Before the injury, Bjork was off to a good start in his first NHL season, as was expected. Bovada, a sports gambling website, had Bjork listed at 7/1 odds to win the Calder Trophy as the league’s top rookie. He was tied with teammate McAvoy, and Brock Boeser of the Vancouver Canucks for second-best odds. Clayton Keller of the Arizona Coyotes had the best odds at 9/2.

Bjork potted his first career NHL goal in his fourth career game against Keller’s ‘Yotes. Of course, Jake DeBrusk assisted on the goal. Two games later, Bjork scored twice in a 6-3 win over Brock Boeser and the Canucks. After that, Bjork’s production dropped off a bit. He went 13 games without another goal. His next tally, oddly enough, came against the Coyotes on December 7. That was his last goal before his season-ending injury took place. Bjork finished his first NHL season with four goals and eight assists, with a plus/minus rating of plus-2.

Even when Bjork was healthy, his production was less than impressive, and certainly not Calder Trophy-caliber. It undoubtedly takes time to adjust to the NHL when coming from the college ranks. But Bjork was one of the best in college, as is evident by his being named a finalist for the Hobey Baker Award in his junior season at Notre Dame.

And while all this seems to imply that Bjork is not worth the hype, I’m here to make the exact opposite argument.

There has been so much commotion since the Bruins’ season came to an end a few weeks ago, as is always the case with any team. If your team is one of the 30 that were unlucky enough to be eliminated, the first thing that happens upon elimination is that fans and management alike begin looking at how to improve the squad for the next season.

The B’s are no different. There have been plenty of questions and discussions surrounding the black and gold. What happens to Anton Khudobin? Who do they re-sign? Who do they let walk? Should they actually sign Ilya Kovalchuk? And, of course, who could forget the age-old debacle of how to improve the defensive corps?

Lost in all this conversation, specifically in regards to the Bruins’ offense, is Anders Bjork. Upon scrolling through the ever-dependable Twitterverse, I see so many analysts forgetting about Bjork when pitching hypothetical Bruins lines for next season.

Here’s another dominate shift by Anders Bjork as he puts on a coast-to-coast clinic for Providence. Although there wasn’t a goal to show for it, he showcases a beauty of a slap-pass as well. #NHLBruins pic.twitter.com/OM0XD0KTbq

There’s little doubt the Bruins will break up arguably the best line in hockey of Patrice Bergeron between Brad Marchand and David Pastrnak. On the second line, David Krejci is most certainly the center. It’s fair to think Jake DeBrusk has earned his spot on the wing, and from there, the question marks begin to appear.

A lot of those question marks will move the side once some offseason transactions are completed, and we have a better idea of what the roster will look like next season. But while Bjork’s shortened rookie campaign was a bit disappointing, there’s no reason to disregard the fifth-round draft pick from 2014.

Bjork’s stock has indeed risen since being drafted. He was selected 146th overall, four years ago. Since then, he found a groove at Notre Dame and established himself as a natural goal-scorer. In his junior and final season, Bjork scored 21 goals with 31 assists in 39 games, averaging 1.3 points per game. Had he entered the NHL draft after having his best years at Notre Dame, you can bet he would have been taken a few rounds earlier.

Boston is a demanding sports city, and there’s no doubt about that. They expect winning teams and players that are ready to contribute to said teams. Mix that with a Bruins squad that relied so heavily on young players, and you’ve got some inexperienced hockey players taking a lot of responsibility in their first seasons.

Many of the young Bruins did a fantastic job handling such a tough situation, especially considering how well the team did last year. Charlie McAvoy took on a role as a leader among the younger players. Jake DeBrusk brought emotion, grit, and skill – just what Bruins fans love to see. Meanwhile, Anders Bjork struggled to find his footing in the NHL and fell by the wayside.

That being said, expect something big out of Bjork this year.

The 21-year-old forward is a natural goal-scorer. He combines his lethal shooting ability with outstanding puck-moving skill and vision on the ice. Take a look back at the numbers previously mentioned from his junior season at Notre Dame. He helped the Fighting Irish to an appearance in the National Semifinals, both with his play and his leadership as an assistant captain. When he pulls the Bruins’ sweater over his pads this year, he’ll be much more prepared.

It won’t come easily, however. Considering Bjork is coming back from a serious shoulder injury, he’ll have to bulk up even more than most. It will be so crucial for Bjork to get stronger on his feet and prepare for a more physical game. Otherwise, one strange hit could result in more damage to the already injured shoulder.

Remember David Pastrnak after his rookie year? After a first year where he impressed with his skills, but left fans worried about his ability to handle the physical aspects of the game, he did what he had to – bulked up. His second year, he was noticeably stronger on his feet, and it made a difference in his game. Bjork will need to follow in Pastrnak’s footsteps.

When I think about the Bruins’ problems and then like 25 minutes later I remember Anders Bjork and Brandon Carlo exist pic.twitter.com/JVr58BMXU8

There’s a reason Bjork entered his rookie campaign with the second-best odds to win the Calder Trophy. His knack for finding the back of the net. His puck-moving abilities. Heck, his leadership. It’s a great combination to see in a player, but one we didn’t see last year.