Bruins Get A Deal Done With Prospect Vaakanainen 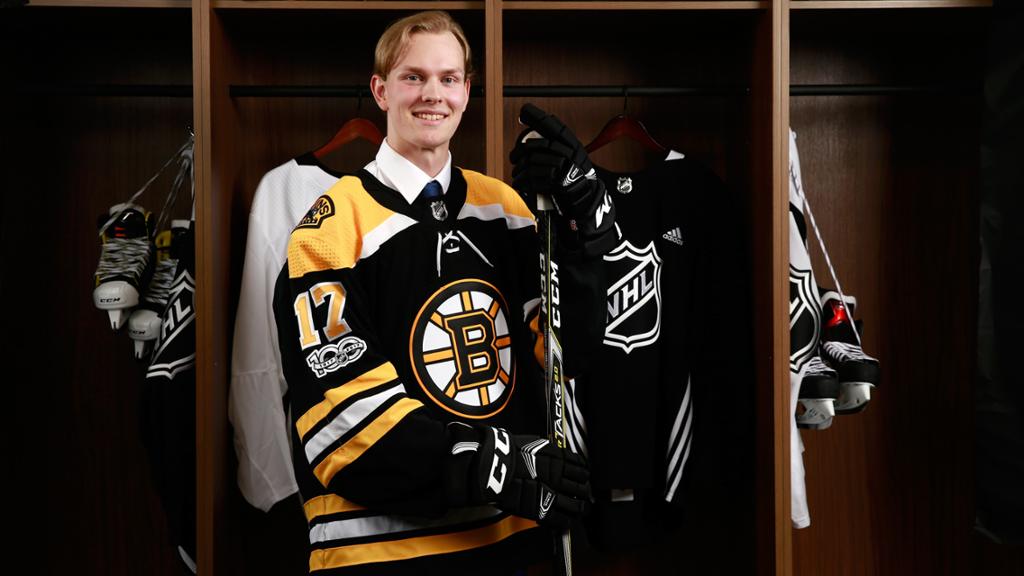 With a little over a week to go until the 2018 National Hockey League Entry Draft, the Boston Bruins end all speculation today with the announcement that the club has signed 2017 first-round defensive prospect Urho Vaakanainen. The 6′-1″ 185-pound Finnish defenseman was selected in with the 18th selection from last years Entry Draft from the United Center in Chicago, Illinois. The 19-year-old is coming to America now that his three-year entry-level contract worth $975K per season was agreed on earlier today.

The talented defensive prospect of the Bruins has had an impressive career developing his skills primarily in his home country and international tournaments. Vaakanainen helped Team Finland to a gold medal in the 2016 under-18 World Junior Championships then followed that up winning silver with the same U-18 team during the 2017 games. In the Finnish pro Liiga league with his SaiPa club, he contributed 4-7-11 numbers in 43 games last season, and in his career overseas with SaiPa he’s posted 7-16-23 totals in 109 appearances.

I believe this is a solid signing for the Bruins and the depth of the organization. It remains to be seen what level of pro hockey the young defenseman will land in the upcoming 2018-19 campaign, but it will be his first competitive action in the smaller rinks of North American hockey.  He’ll train well during the long summer offseason beginning with the team’s annual development camp at the end of the month, and will undoubtedly challenge veteran defenseman that are under contract next season for a roster spot.

In my opinion, it can never hurt a player of his age to act like a sponge and soak up everything he can with the Providence Bruins of the American Hockey League. I know a player like Brandon Carlo played his first year after leaving Tri-City of the Western Hockey League, but he wasn’t challenged with the decrease in ice size. International ice measurements are a little over 205-feet by 98-feet while most rinks in North American rinks are 200-feet by 85-feet so there is a significant adjustment for players coming over from overseas.

Providence Head Coach Jay Leach who was a defenseman himself is having good success with fellow defensive prospects such as the former number one pick Jakub Zboril and second-round selection Jeremy Lauzon in 2015. I know it’s a different situation and position all together but often ask myself if current NHL Bruins forward Jake DeBrusk would’ve had as good of a season in 2017-18 if he didn’t properly develop in the AHL for his first pro-level experience? I’m sure he’d be a fantastic player but might not have had the year the Bruins faithful saw last season.

Below Are What The Experts Are Saying About The Bruins New Addition To The Organization.

The Draft Analyst Steve Kounianos had this scouting report on Vaakanainen in a March 2017 article he posted about the skilled blueliner.

Vaakanainen is the latest edition of poised Finnish two-way defenders who seem to grasp the nuances of the position far better than the bulk of their peers. While it’s easy to compare him to 2016 NHL first rounder (and fellow countryman) Olli Juolevi, Vaakanainen comes across as more polished and reliable within the 200-foot game. A wonderful skater with a fluid stride, he is calm and steady with the puck and will peel back in the face of pressure rather than force things. His passes are short, crisp and strategic, and he can use the boards with both precision and effectiveness. Vaakanainen has a hard shot and is being groomed to quarterback a power play, but we were more impressed with his play while anchoring Finland’s top penalty-killing unit and refusing to float away from his slot responsibilities. He seems to have the puck on a string, and playing in Finland’s top circuit reveals a young man who is clearly one of the most mature of any first-year draft eligible. Vaakanainen won’t be a franchise rejuvenator all by himself, but we expect him to solidify one of the top two pairs for either a mediocre team or a contender.  – The Draft Analyst

Dobber Prospects writer Mike Drover had this scouting report on the Finnish defenseman in an article wrote in July of 2017 shortly after the Bruins selected him.

Playing last season for Jyvaskala of SM Liiga, Vaakanainen established himself as an elite stay-at-home defender with an NHL stride. He’s got the great hockey sense and plays to his strengths, his skating, his poise with the puck, and his defensive prowess. Vaakanainen was considered by many to be the most complete defensive defenseman coming into the draft. Vaakanainen excels on the penalty kill, the ability to shut down the rush play, and is generally not a liability with the puck. Vaakanainen hasn’t shown elite offensive skill at this point in his career, scoring only two goals and nine assists in 55 total games played last season. There are questions about whether Vaakanainen will be an offensive liability in the near term. Urho has a hard but inaccurate shot from the point but possesses good passing and decent on-ice vision.

Despite the knocks to his offensive game, the prevailing thought here is that the Bruins have acquired a solid defenseman with plenty of upside. Vaakanainen is a pick that makes a lot of sense for the Bruins who already have two great, young offensive defenders in Torey Krug and Charlie McAvoy.  –  Dobber Prospects

The Hockey News provided us with this insight below about Urho’s game and areas of concern.

Excels at the defensive aspects of playing along the blueline, such as shot-blocking ability, shutdown qualities and sound decision-making with the puck. Is a solid puck mover with a fairly projectable frame. His offensive game will never be his calling card, so he is unlikely to ever become a No. 1 rearguard in the National Hockey League. Needs to add weight and get stronger to maximize his shutdown appeal. He’s a Reliable, shutdown defenseman with some upside.  – The Hockey News