My Bruins Stanley Cup Runneth Over!

With each passing off-season day, hockey fans pining for the puck’s return can at least find entertainment in the weekly stories about where their sport’s most cherished chalice–The Stanley Cup–is going or has already gone. For, it’s a Summer tradition for the winning team’s players to take it on a myriad of individual journeys — from hometowns to Alma maters to theme parks to dive bars (here’s my favorite story so far featuring Natick’s own John Carlson of the Cup-winning Caps).

For me, personally, the Cup-touring Summer season was most memorable exactly seven years ago to the week when I found out that Bruins goalie / 2011 playoff hero Tim Thomas was bringing a special silver trophy (actually three special silver trophies as you can see above) to his high school in Davison, Michigan. Right on the (skate) heels of the B’s epic postseason run which successfully brought The Cup back to Boston for the first time in nearly four decades, I discovered the briefest of press releases documenting this buried underneath the police scanner reports — a fitting place, one could argue, since Thomas did in fact steal a few wins on his way to claiming the Vezina, Conn Smythe and every save-related goaltending honor you could think of during those magical and memorable ’11 playoffs.

At the time, I was the morning anchor for the local CBS affiliate in Lansing and also produced a feature series about “the good news stories” happening across the state. I figured this timely Tim Thomas trip would most certainly qualify but with press credentials limited and almost all going to the sports reporters and anchors in the market, I knew it was going to be a near-impossibility for this lifelong Bruins fan in the heart of Hockeytown to “B” there. Or, so I thought:

Who would’ve ever imagined that a pair of flowy black slacks, a whispy white shirt and a dusted-off gold tie could make for a winning wardrobe combo good enough to qualify as a “beat reporter”!? Well, that’s what I was wearing when I emailed in my request to be in Davison and faster than a Zdeno Chara All-Star slapshot, my credentials arrived, complete with a Cardinals / Bruins hybrid lanyard.

Naturally, I made sure to wear the exact same outfit to the event itself, proving for cameras across The Mitten and Mass. that the Black ‘N Gold were indeed a part of my professional life just as they much as they were/are my personal life. Even “TT” himself took notice after the press conference when I went to shake hands and say hello, thank you, congrats, thank you, good job, thank you and the like.

Do I regret not being able to say anything clever with my :15 seconds of Summer time Cup fame, as evidenced by my tongue-tied Tim Thomas tomfoolery in the above clip?  Sure, I do. I definitely wish I could’ve spouted off some impressive stats or witty anecdotes or historical how-do-you-do’s befitting of my skills as a broadcaster and bespoke-d Bruins fan.

But considering how looonnngggggg the off-season can be for hockey fans, journalists, bloggers and beat reporters, I was “B”-yond happy to have such a lasting and unforgettable experience next to not only The Stanley Cup, but also a modern-day Bruins legend of the crease. And it’s this reason why we all should be paying attention to where The Cup is going, who’s sharing in it and celebrating with it, and who’s scheduling it to be near YOU! 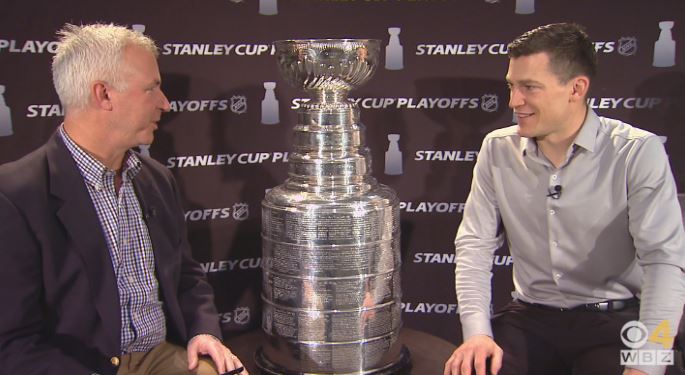 Former Bruins assistant captain and heralded postseason D-man Andrew Ference proved this exact point in the Spring when he brought The Cup back to Boston to revel in the amazing memories of the 2011 campaign with WBZ-TV’s Dan Roche. It didn’t take long for social media to enjoy this or for anyone around New England who was watching. There’s just something special about the shine of that silver reflecting the face of a favorite player on YOUR team (I tip my cap to you, Patrice Bergeron). It’s captivating. It’s motivating. It’s what the game is all about.

That’s why the Summertime can be just as exciting and eventful for us humble hockey-ites. If there’s not something to immediately look forward to, then there’s definitely something close by worth remembering. I don’t know if that’s how it goes for you, but thanks to July and August of ’11, that’s how it will always “B” for me!