Boston Bruins: Expiring Contracts Have Something To Prove 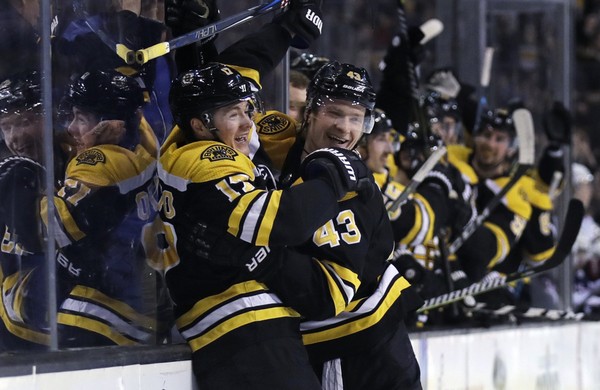 Throughout the course of a season, many players on a team will have that invisible monkey on their back. Sometimes it’s to break a goalless drought or to prove their worth to doubters in the fan base or management. For the Boston Bruins in the upcoming 2018-19 season, many players on the roster will look to impress the front office and possibly lock in an improved contract for years to come.

Danton Heinen had an impressive rookie campaign in the 2017-18 season, scoring 47 points over the course of 77 games while being bounced around the Bruins top nine. Going into the upcoming season, Heinen could land himself a spot on the top-six of the Boston forward core, if he can turn in a solid season.

Although Heinen had a successful first full season in Boston, he was still doubted when the playoff season came around, as he was scratched by head coach Bruce Cassidy in Game Six of the 2018 Eastern Conference Quarterfinals against the Toronto Maple Leafs. The Leafs ended up winning that game, forcing a Game Seven, but Heinen would indeed come through in that do-or-die game, scoring the goal that tied the game at two apiece.

Let’s say Heinen manages another successful season and finds a permanent home on the Bruins top six. A new contract could find its way to Heinen’s wallet and would most likely keep him in Boston. Danton was a fourth-round selection by the B’s in the 2014 NHL Entry Draft — the same draft as David Pastrnak, Anders Bjork, and Ryan Donato. His entry-level contract expires at the end of the upcoming season and if he can produce at the same level or better than last year, he could be asking for a decent pay raise when contract negotiations begin.

Charlie McAvoy may be highly regarded as the future franchise defenseman for the Boston Bruins for many years to come, and after a solid first full season in the NHL, McAvoy is on his way to that title.

In 63 games this past season, (missed 19 games due to abnormal heart rhythm and sprained MCL), McAvoy was second on the Bruins for most points by a Bruin defenseman with 32 points behind only Torey Krug. McAvoy also logged the second-highest time-on-ice average, averaging 22:09 minutes on the ice, behind only Zdeno Chara. 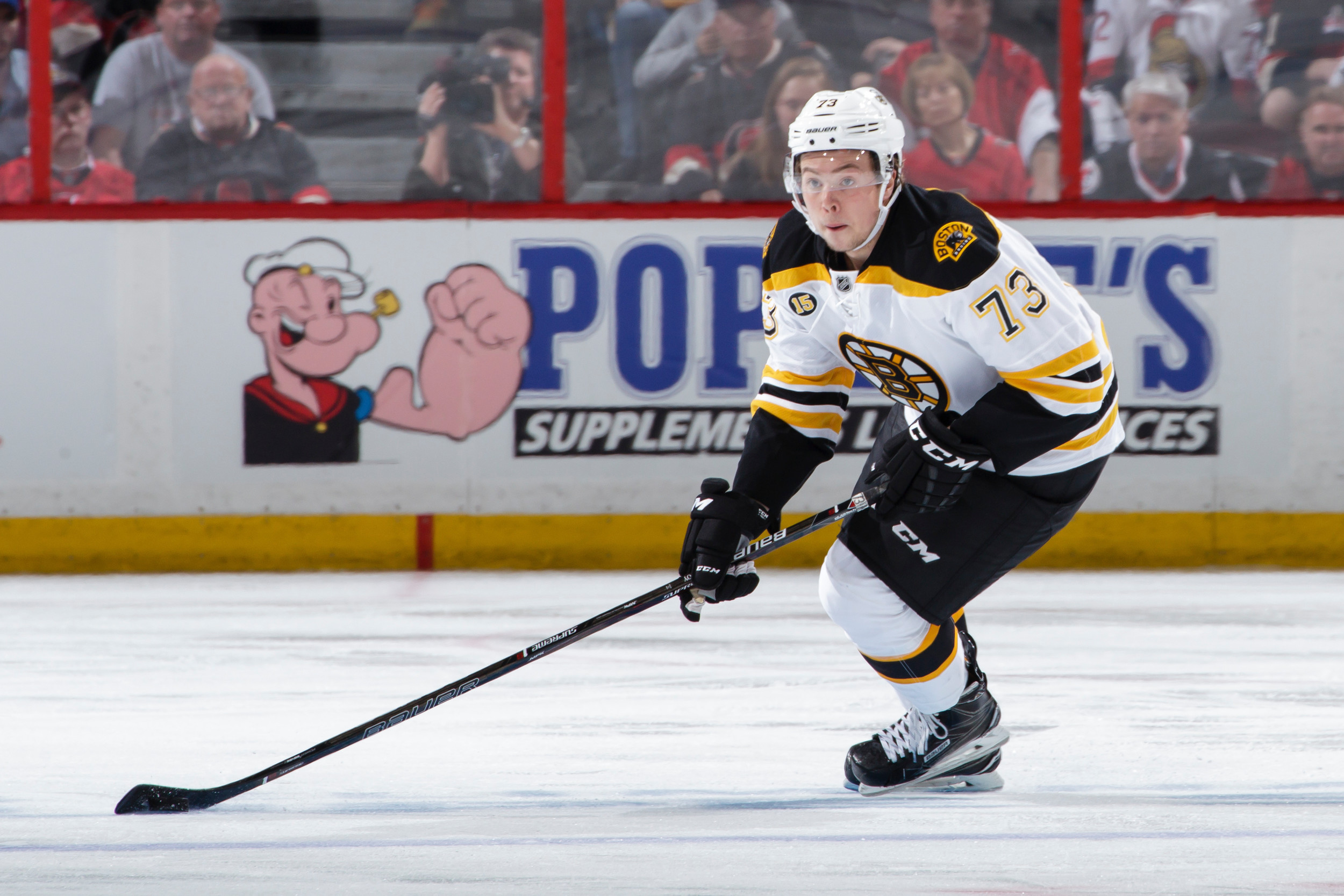 As with every good player, they deserve top dollar once their contract is complete and that thought seems to stay true when talking about younger players on expiring entry-level deals — specially young players who have the potential to become a superstar on their respective team or even the entire league.

McAvoy’s season earned him a spot on the NHL All-Rookie 1st Team. He was one of only two defensemen to get the honor, (Devils D-man Will Butcher was the other). Charlie finished fifth in the Calder Memorial Trophy voting — the highest defenseman on the list.

In today’s NHL, finding a bright talent on the blue line can be a rare commodity and most teams will make sure they do not lose that talent by offering them a somewhat lucrative contract. If Charlie McAvoy can avoid missing a large portion of games this season while producing possible career-high numbers, he too could be asking for a solid pay raise during the upcoming offseason.

Heading into his first full NHL season, Ryan Donato already has a lot of hype built up around him mainly by the Boston sports media. However, the hype is not quite undeniable, as he is a solid talent to have on any roster.

The exact role of Donato for the 2018-19 campaign is uncertain at this moment in time. Some say he may play on the wing or he may skate at his natural position of center. The most practical theory is that he will be flipped-flopped around until a position that works successfully is found.

Donato played in 12 regular season games for the Bruins last year, producing 5-4-9 totals, but he was held off of the score sheet in three playoff games for the Black and Gold. The Bruins signed Donato to a two-year entry-level contract back on the 18th of March and due to the 10+ games he played in, a year was taken off his deal — thus meaning he has only this year remaining on contract.

Donato is able to bring more offensive threats and it will be interesting to see his results after a full season with the club. Although, even if he has a really impressive season, it’s unlikely he’ll sign a long-term deal worth a large amount of money. It’s more likely he signs something along the line of a two or three-year contract with an annual salary around the $3.5 million mark. Of course, that all depends on how he performs this season.

Either way, if Donato wants a big contract in the future sometime, then this season would need to be productive.

Bruins fans have something to look forward to when it comes to the future of the Bruins blue line. With the already mentioned Charlie McAvoy and Brandon Carlo, the Boston Bruins may just have a solid one-two punch on the backend.

Logging nearly 20 minutes of ice time back in 2016-17 and just over 19 minutes of average time on ice in 2017-18, Brandon Carlo is one of those defenders that strives for the longer minutes during a game. Bruins captain Zdeno Chara has been that main man that logs minutes for the B’s, but with only one year signed on contract and him being at the age of 41, Chara may not be able to continue playing well over 20 minutes per game effectively.

Carlo is not the most offensive defenseman in the league, but with guys such as Torey Krug, Matt Grzelcyk, and Charlie McAvoy, the offensive aspect of the defensive core is basically taken care of. Brandon Carlo, however, will bring a more shutdown defense than the others mentioned and is willing to play a lengthy amount of time in one game. 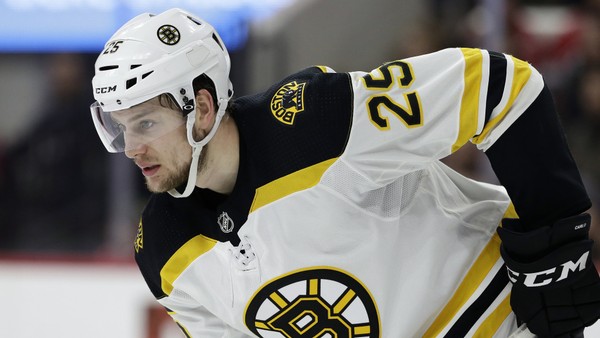 In both seasons in Boston, Carlo has had a Corsi For % of above 50%, (52% in ’16/’17, 51.5% in ’17/’18), essentially meaning the Bruins were controlling the puck more than they weren’t while Brandon was on the ice. While this can be a result of a plethora of contributors, it is better to have a positive Corsi For than a negative Corsi For.

While he does tend to make errors on both sides of the puck, many rookies throughout any sport are expected to make a few mistakes here or there, but it is how they recover and play for the games to come that makes the real difference. Clearly, the Bruins management has trust in Carlo — playing him the majority of the time somewhere in the top four, often with Torey Krug.

In back-to-back playoff years, however, Brandon has been unable to join the team for the postseason, dealing with injuries in both. Most recently, Carlo suffered a broken ankle in one of the final few games of the regular season that sidelined him for the entirety of the playoffs.

Carlo has lately stated that he expects to be fully healed and ready for full contact once training camp rolls around this upcoming September.

Brandon Carlo says he plans on having "no restrictions" when training camp rolls around next month. #NHLBruins https://t.co/kBgUS4GQxB pic.twitter.com/o00NEugRDd

If a healthy Carlo can have a successful season and playoff run, then a solid new deal could be coming his way.

There are also names such as Noel Acciari, Zdeno Chara, and Adam McQuaid that have expiring contracts on July 1, but the four free agents listed above are the most valuable come contract negotiations and could very well be the future of the Boston Bruins for many years to come.

If these players, including Chara, McQuaid, and Acciari, want a new, improved deal by the Bruins organization, then you can expect their very best hockey to be played in order to prove their worth to the franchise. For a player such as Chara, a poor season could spell the end of his career in general, let alone him returning to Boston. McQuaid and Acciari can most likely be replaced in free agency or with up-and-coming prospects like Jacob Forsbacka-Karlsson and Urho Vaakanainen.

To finish off, I ask you this – will the likes of Ryan Donato, Danton Heinen, Charlie McAvoy, Brandon Carlo, and the three unrestricted free agents prove their worth and earn a larger contract this summer? Let me know via my Twitter @tkdmaxbjj.

Side Note: Check out my Bruins Pump-Up video that I recently released!