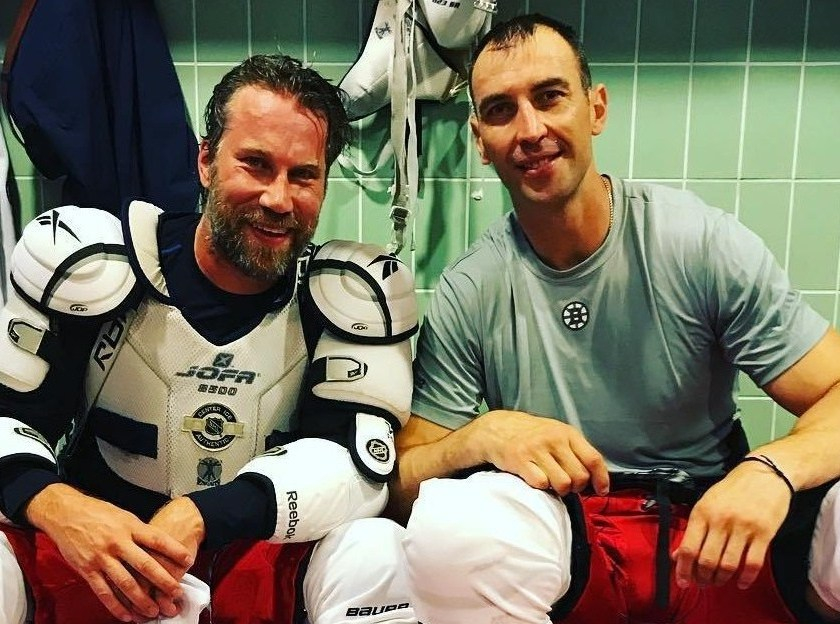 Most players take the opportunity to enjoy some quality time with friends and family during the offseason.  But let’s be honest, hockey is always on the minds of an NHL star and what better way to keep in shape than to (you guessed it) play some hockey.  Along with the “Selfie Summer,” the Bruins have added #BearTracks (check out their Twitter) where fans can follow the travels of some of the players as they get ready for the new season. Across the pond, we saw a few of the guys hitting the streets of Norway, Sweden, and the Czech Republic.

Captain Zdeno Chára hit the road this summer spending some family time in his native Slovakia (not to mention having an insane exercise regimen). He then flew to Oslo to participate in the Summer Classic “Henke & Zucca” charity game at Norway’s Ullevaal Stadium. NHL stars Mats Zuccarello and Henrik Lundqvist hand-pick players to compete in this superstar-event benefiting those in challenging situations around the world.

Back in Slovakia, Chára also won the 2017-18 award for Best Defenseman and Best Hockey Player which was given by the Slovak Ice Hockey Federation. And just in case you missed it, Chára hit the gym really hard — an incredible feat given he’s 41-years-old. Could it be that he’s part-human, part-machine? Either way, he looks ready for the new season.

Across the way, the Bruins #BearTracks met up with David Pastrňák in his native Czech Republic as he showed fans his offseason workouts with trainer Ales Parez. From tennis to strength training,  Pastrňák made great use of his time around Prague before jet-setting to Sweden for some NHL business.

📷 And here are some of the best photos from the #BearTracks🐾 crew's visit with @pastrnak96: https://t.co/rXR7NgQBcr

Former Blackhawk and new Bruins forward Joakim Nordström gave fans a tour of his native country while wearing some nice new threads; specifically a black and gold jersey with a spoked “B.” After spending time in his hometown of Stockholm, it was time to put the skates on. Along with fellow Swedish NHLers (and one happy Czech), Nordström showed off his skills on the ice. The 26-year-old Swedish player is hoping to make an impact this season for his new team and judging from this video, it’s looking pretty good.

Sweden holds a special place for both Nordström and Pastrňák. For the young Czech, this meant returning to where his hockey career had started. From 2012-2014, Pastrňák played for the Södertälje Sportklubb (a Swedish professional ice hockey club).  Nordström started his career playing for the Allmänna Idrottsklubben Ishockeyförening.  While in Stockholm, “Pasta” stretched his legs out on the ice and had a chance to meet his new Swedish teammate. Along with many other European-born players, the 22-year-old participated in the second annual NHL European Player Media Tour.

Interviews, photo shoots, and signing pictures of "my beautiful face."

Summer is almost over, and players are gearing up for a jam-packed schedule. With development camp right around the corner and captain practices underway, the veterans and young superstars that make up the Boston Bruins are coming back refreshed, healed and ready to go. For die-hard fans alike, October can’t come soon enough.