Can Backes Still Be A Valuable Contributor For The Bruins? 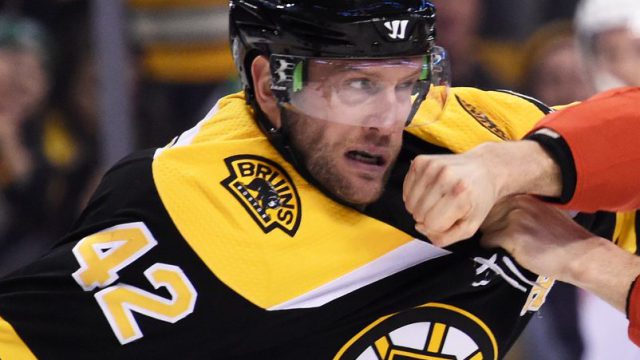 Two years ago, the Bruins made an overpay in free agency. Frequently on the first day of free agency teams will pay too much for players that won’t ever live up to their contract. Overpaying happens all the time, very rarely is a player paid the right amount based on their skills. Often, a player will score a rich deal based on their past performance and won’t be able to be the same player. These are some of the risks teams take when making a decision to sign players in free agency. The Bruins made a decision to bring in David Backes two years ago on a five-year $30 million deal and this season will be a make or break year for the 34-year-old winger.

In two seasons in Boston, the former St. Louis Blues captain has recorded point totals of 38 and 33 respectively. He played in 74 games his first season and then just 57 games last season after dealing with injury issues early in the season. Obviously, the point production has gradually gone down for him the last three years, going from 45 his last year in St. Louis to 33 last season. Missing 17 games last season certainly put him behind the eight ball but he ended up finishing just five points behind his previous season total. To me, there are still positives to carry away from last season for Number 42. Playing with Danton Heinen and Riley Nash for most of the season, Backes looked comfortable in his role and provided some much-needed leadership for a team still adjusting to life with Bruce Cassidy. Backes has played in 84 regular season games under Cassidy, recording 49 points.

There have been trade rumors galore this offseason which have included Backes, and this is a popular idea because of his big contract. Backes was signed in 2016, a summer in which many players were given huge contracts but most of these players have failed to live up to these rich deals.

Now in no way, shape or form am I saying Backes isn’t overpaid because in retrospect a five-year deal to a 32-year-old player is very dicey, especially when currently he is the sixth-highest paid player on the roster according to Cap-Friendly. You certainly wouldn’t say he’s the sixth-best on the roster, but I still believe he can be a valuable piece for the team going forward. He was one of the main reasons the Bruins were able to regroup and make the playoffs two years ago as he demonstrated great leadership and solid play down the stretch. After recording just 22 points in his first 57 games that year, he put up 16 points in his final 27 games to help the B’s return to the postseason for the first time in three seasons.

Jamie Benn and David Backes drop the gloves at the opening face-off. One word, Hockey! pic.twitter.com/E1xxG64ufU

Obviously, yes there are concerns about his age and his style of play but looking at what he’s done under Cassidy, I’d say give him a chance to be a solid player this season. Backes’ style of play is definitely being fazed out in the current NHL, but that doesn’t mean that he can’t still be a physical force of a player. Backes can still be an effective player on the power play and can still be relatively solid in five on five play and if he can hit people and get to the front of the net than that’s a bonus. In my opinion, to win a Stanley Cup, you need players like Backes you will give it all for the team, mentor the younger players and give you solid performances when needed. Certainly, it’s very easy for players this day-in-age to be overpaid and it’s possible that the player won’t live up to the money but sometimes you make sacrifices in the name of salary to bring in players you believe can help win a championship.