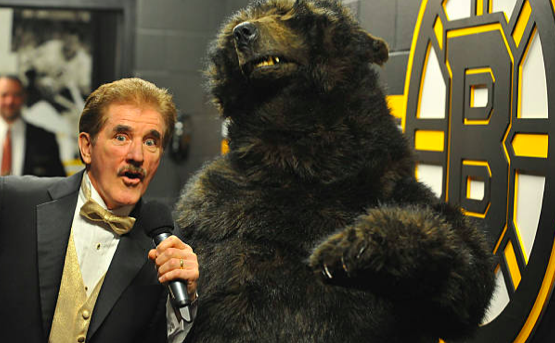 🎥The Bruins Anthem Auditions had it all. Coming from all different ages and backgrounds, check out some of the renditions of The Star-Spangled Banner. pic.twitter.com/UrtzZJYk8U

Well, for those who thought his mellifluous mic could soon be theirs, the search was recently on (and now narrowing according to our friends at 98.5 The Sports Hub) for the B’s next anthem singer. But oh what Star-Spangled shoes you’d have to fill! After an impressive 42 years belting both the U.S. and Canadian National Anthems on original Boston Garden ice, FleetCenter ice, TD Banknorth Garden ice and lastly TD Garden ice, the inimitable Rancourt has hung up his trademark tuxedo for retirement.

Let’s take a look back at some of the lyrical love, memorable moments, and fired-up fist pumps Rancourt left us that will not be soon forgotten in Boston — or anywhere throughout the world of hockey for that matter!

Just minutes before Louis Tiant took the mound at Fenway Park in the above 1975 World Series Game 6 clip, bringing every fan to their feet, another then-Bostonian did the same with a rousing rendition of the American National Anthem. That man was Rene Rancourt.

“One of the greatest thrills of my life was to sing in the World Series because they generally hire very famous singers at the World Series,” he told Vice Sports during an interview in 2016. And that famous singer he was referring to? None other than the Songbird of the South Kate Smith herself (click the link to hear her timeless take on “God Bless America” at a Bruins/Flyers game from 1974), who had fallen ill only hours before the first pitch. Thankfully, Rancourt’s pitch was first up for backup after he had impressed venerable Red Sox organist John Kiley with his vocal prowess on the radio. After all, Rousing Rene was a product of the Boston Conservatory opera program and had come from a choir background, so he obviously had the pipes to produce a patriotic performance. And just like Carlton Fisk’s unforgettable home run during that game, Rancourt’s anthem was equally unforgettable; Kiley, also the Bruins organist at the Old Garden, soon recommended he go from Yawkey Way to Causeway Street to continue his respectful rendition of American tradition honoring our Red, White & Blue for the Black N’ Gold. The rest, as they say in opera, is la historia.

You can thank Randy “Stump Pump” Burridge, the feisty B’s forward from the mid to late 1980’s, for giving Rene Rancourt his signature move after performing the anthem. Rancourt, as he described to the Boston Globe (and in other recent interviews), got the idea after seeing Burridge pump his fists in the air whenever he scored a goal.

Fun Fact: @NHLBruinsAlumni Randy Burridge inspired #ReneRancourt‘s trademark fist pump after the anthem because he did the same whenever he scored a B’s goal. Here he is standing for the anthem as an @opeecheestars LW! Article to follow on @BlackNGoldPod #Bruins #BruinsFam #NHL pic.twitter.com/6PWG6vdMTa

And in 1988-89, Burridge scored a lot of goals — 31 to be exact — so Rancourt had plenty of time to practice and perfect the pump, as well as his unmistakable “salute” upon conclusion of the anthem:

What a tradition both of those gestures became for Boston fans on home ice. You knew exactly what to expect when the red carpet rolled out for Rene–perfect diction and enunciation, resonating-to-the-rafters vocals and a salute-to-fist-pump finish that truly got you pumped up to watch the game. He became as iconic as the spoked-B emblazoned on the team’s jersey; when you thought of playing Boston in Boston, you also thought of Rene Rancourt. And how could you not when every home game — and I mean EVERY home game (he once said he only missed one performance in his 40+ years of singing because he was sick) — started like this:

So we all know Rene Rancourt can sing the anthem and with plenty of puck panache and acoustic aplomb. But did you also know he’s an accomplished wedding singer? Eat your heart out, Adam Sandler, because Mr. Rancourt’s been doing it since the 60’s when his then-girlfriend, now-wife Maria helped him start a wedding band. “A society orchestra,” he called it during his Globe interview.

In fact, Rancourt joked that singing in a wedding band with Maria and performing at weddings “paid the bills” in between his anthem stints for the B’s. But what he truly enjoyed, especially later in his career, was paying it back to the Boston fans. And there was no better time for a generous gift from Rene than to hear him sing your favorite Christmas carols and holiday hits at intermission of the Bruins home game closest to the 25th of December:

I remember him belting out all of the above tunes year after year to non-stop festive fanfare and sporting spirit. This was the only home game I could ever make it to for years because my professional work life in broadcasting rarely afforded me time off. But around Christmas, the schedule was always a little lighter, so it made coming back to Boston for a few days all the more doable and all the more memorable. And you better believe I’d time it to not miss the “Rene Caroling Game.” No such game for me was more memorable than in 2010 when the first few thousand fans in attendance went home with a coveted Rene Rancourt ornament and also had the chance to meet him during the second-period intermission. Needless to say, or better yet like he did sing, “there’s no place like home for the holidays.” Thanks, Rene!

During the 2nd intermission of the Bruins’ Pre-Christmas home game on Dec. 23rd, 2010, Rancourt rolled out the red carpet for “pump pics” with fans. (Photo Credit: Evan Michael)

Holding (Ran)Court When It Counts

There are moments in sports that are more groundbreaking, more unifying, more emblematic of the goodness of people than anywhere else, including politics. And Rene Rancourt was at the center, or should I say center ice, of one of those indelible moments. It was only 48 hours after the tragic Boston Marathon bombing in April of 2013 that the Bruins were scheduled to play the Sabres at home. The city, still in a state of shock, disbelief, and recovery, was in need of a sign of hope, togetherness, strength. And it goes without saying how BOSTON STRONG everyone in attendance at this game became once Rancourt started singing. Only two lines into the anthem, right after he uttered proudly the word “proudly,” he let his voice trail off so the crowd could be heard. In unison, 17,565 hearts and voices seamlessly took over and sent a message to the rest of the nation and the world that Boston was stronger than ever, with a resolve more fervent and passionate for its citizens and its country than anywhere else at that time.

Watching this clip, even all these years later, still gives me goosebumps and brings tears to my eyes. And it couldn’t have happened without Rancourt truly feeling the significance of the moment and truly being IN the moment. This wasn’t just another regular rendition of “The Star-Spangled Banner.” It was a cathartic experience of joy and togetherness, of indomitable strength and unflinching spirit, of the courage and will of a people to not be defeated, even in the aftermath of tragedy and terror.

In his own words, when interviewed by our friends at NESN just before his retirement, here’s how Rancourt described that day, that anthem and that moment: “Nothing comes close to that…The marathon bombing game, where the Bruins just happened to be the only professional sports team playing right after it. I think it was two days after. I was petrified to get out there. I planned, of course, to stop singing in the middle of it, but I was very, very afraid of doing that. The reaction was something I will never, ever forget. That’s my proudest memory.”

As much a part of @NHLBruins games as the players, fans, pucks and ice. Rene Rancourt, who’s belted out the National Anthem & finished it with fist-pumps since 1975, to retire at the end of the season. Thank you for the stirring renditions especially after the Marathon bombings. pic.twitter.com/hkY0TOZZEe

One of my #BannerMoments? #Bruins fans with a key assist, singing the anthem with Rene Rancourt after the 2013 Marathon. Chills.

As Animated As They Come

To say Rene Rancourt was an animated character, what with his salutes, fist pumps and overall energetic performances, would be an accurate statement. Turns out, it’s also quite the understatement since he literally became animated for the short-lived — but beloved — Bruins YouTube series “The Bear and The Gang.”

It was at times “out of this world” but certainly didn’t make you feel “deserted” when it came to entertainment value. There was also a sitcom-style pilot that featured Rancourt’s rather spot-on acting chops parodying his own anthem ending in what looked to be Brad Marchand’s basement. I tell you what…if he sang before every hockey video game I played, I’d play a lot more hockey video games (my favorite will always be NHL ’94 which rather fittingly featured Bruins goalie Andy Moog on the cover).

As we say goodbye and give a grateful fond farewell to the institution that was Rene Rancourt, we should all remember that sometimes the most inspirational people in our lives can be the ones who we aren’t necessarily close to, but who make us feel close to each other — who bring us closer together just by being who they are and doing what they do. Rene was just that kind of person. And we only need to look back on his long career and legacy to be reminded of it.

Thankfully, the Boston Bruins organization and the city of Boston as a whole will always help us do that with tributes like this:

Not one, not two, not even three…but FOUR 👊👊👊👊  fist pumps to you, Mr. Rancourt, for an incredible career in Boston — one that forever shaped B’s fandom and will continue to do so even after a new voice takes over. Because some voices will always ring, and sing, loudly and proudly in our minds no matter how much time passes.

Oh, say it isn’t so? Thankfully, this time it is!